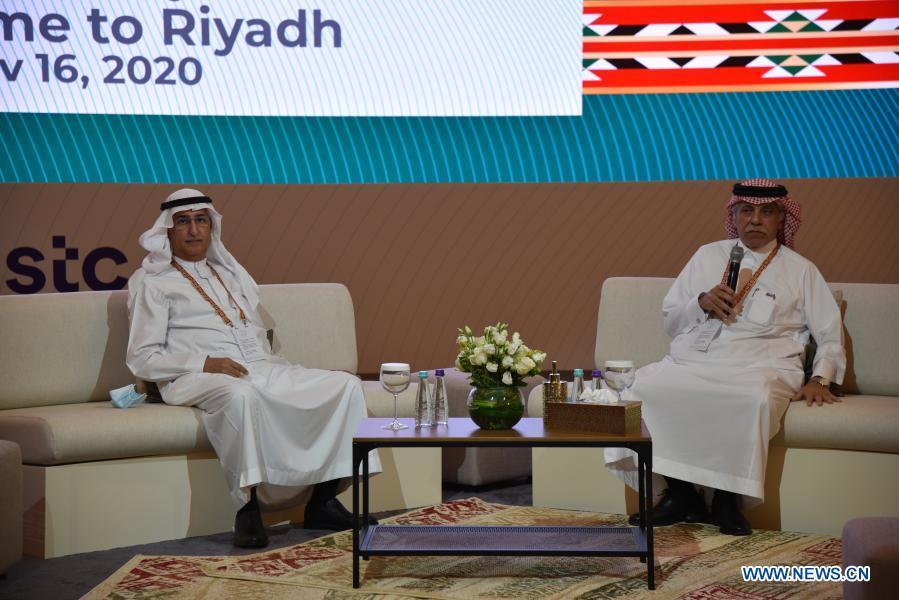 Fahad Almubarak (L), Saudi Arabia's minister of state and sherpa of Saudi G20, and Majid Al Qasabi, Saudi minister of commerce and acting minister of media, attend a media briefing in Riyadh, Saudi Arabia on Nov. 16, 2020. Fahad Almubarak said on Monday that the kingdom is able to execute the full agenda as the G20 presidency amid the COVID-19 pandemic. (Photo: Xinhua)

RIYADH, Nov. 17 (Xinhua) -- Fahad Almubarak, Saudi Arabia's minister of state and sherpa of Saudi G20, said on Monday that the kingdom is able to execute the full agenda as the G20 presidency amid the COVID-19 pandemic.

"We are honored to hold the G20 presidency for this year. We had a very busy year and held over 100 meetings of deputies and ministers," Almubarak told a media briefing in the capital Riyadh, ahead of the G20 Leaders' Summit, which will be held virtually on Nov. 21 and 22 and chaired by Saudi King Salman bin Abdulaziz Al Saud.

The G20 brings together some of the largest economies, which account for about 85 percent of the global GDP, to discuss the most challenging socioeconomic global issues. Saudi Arabia, the only Arab member of the group, assumed the presidency of the G20 in December 2019.

With exceptional challenges posed by the global COVID-19 pandemic this year, the Saudi G20 presidency hosted a historic Extraordinary Virtual Leaders' Summit on COVID-19 on March 26, followed by a series of ministerial meetings to tackle the COVID-19 crisis and mitigate its impacts.

This extraordinary Summit resulted in swift and unprecedented actions to protect lives, livelihoods and the most vulnerable, including an injection of a total of 11 trillion U.S. dollars into the global economy, according to a G20 statement released on Monday.

The statement also highlighted the 21 billion dollars spent at the outset of the crisis in supporting the health systems and the hunt for a vaccine, and the 14 billion dollars in debt relief for the world's most vulnerable nations in a move to ensure their ability to focus all resources available on fighting the pandemic.

The upcoming G20 Leaders' Summit will set the foundations for a more inclusive, resilient, and sustainable recovery from the COVID-19 crisis, the G20 statement noted.

"2020 is an exceptional year. COVID-19 has taken the world off guard, and the whole world's economy went into a real pause," said Majid Al Qasabi, Saudi minister of commerce and acting minister of media, at the media briefing.

Under the theme of "Realizing Opportunities of the 21st Century for All," this year's G20 Leaders' Summit seeks to "deepen global cooperation," a separate G20 statement said.

According to the statement, the upcoming Summit will focus on three major topics: Empowering people by creating the conditions in which all, especially women and youth, can live, work and thrive; Safeguarding the planet by fostering collective efforts to protect natural resources; Shaping new frontiers by adopting long-term and bold strategies to share the benefits of innovation and technological advancement.

"But there is much more to do," the statement noted.