Saudi women will drive but face bumpy road to empowerment 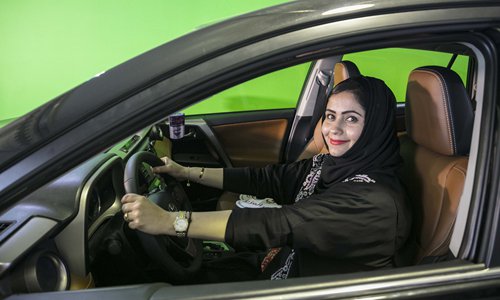 A Saudi woman tests a car while posing for photos at a car show targeting women drivers, at Jeddah Food Festival in Saudi Arabia on January 18. Photo: VCG

Mervat Bukhari, a force of nature draped head-to-toe in a niqab, braved insults and taunts to become the first Saudi woman to work at a gas station, something unimaginable not long ago.The kingdom, where conservatives once bridled at even limited freedoms for women, is in the midst of reforms that mark the biggest cultural shake-up in its modern history.Kick started by Crown Prince Mohammed bin Salman, the reforms include the historic decision to allow women to drive from June 2018, attend soccer games and take on jobs that once fell outside the narrow confines of traditional gender roles.But the backlash faced by women like Bukhari illustrates how newfound empowerment is a potential social lightning rod in a country unaccustomed to such visibility for women.When Bukhari, 43 and a mother of four, was promoted as supervisor of a gas station in eastern Khobar city last October, insults began pouring in on social media with the hashtag "Saudi women don't work at gas stations."Bukhari, previously employed in a junior role by the same parent company, was forced to go on the defensive, telling critics she was in a managerial position and not physically handling fuel nozzles."I am a supervisor. I don't fill gas myself," she reasoned, seeking to win a modicum of respectability for a job that class-conscious Saudi men disdain."Women today have the right to do any work."'Better educated, but less employed, underpaid' Prince Mohammed's "Vision 2030" reform plan for a post-oil era seeks to elevate women to nearly one-third of the workforce, up from about 22 percent at present.Government statistics also indicate that more than one million Saudi women are currently looking to enter the workforce. The reforms have seen the Saudi labor market slowly open up to women, introducing them to jobs that were once firmly the preserve of men.The social change, catalyzed in large measure by what experts characterize as economic pain owing to a protracted oil slump, has introduced a series of firsts.Saudi media has championed in recent months the first woman restaurant chef, the first woman veterinarian and even the first woman tour guide.But women face sobering realities - despite often being better qualified than men."Saudi women are better educated, but less mobile, less employed and vastly underpaid," Karen Young, a scholar at the Arab Gulf States Institute in Washington, told AFP.Average monthly salaries in the private sector are close to 8,000 Saudi riyals ($2,134) for men, but only 5,000 riyals for women, according to research firm Jadwa.Saudi Arabia ranked a low of 138 out of 144 countries monitored in the 2017 Global Gender Gap Report by the World Economic Forum on gender parity.But Riyadh is seeking to change that through what appears to be social engineering.The decision to allow women to drive after a decades-long ban could give women the much-needed mobility to join the workforce.For the first time, women are seen alongside men in jazz music concerts and in mixed-gender restaurants, as the influence of the once-feared religious police - notorious for enforcing gender segregation - appears to be waning."The well-known expression: 'You are a woman, cover your face' seems to be disappearing from our society," human rights lawyer Abdulrahman al-Lahim wrote recently in the pro-government Okaz newspaper.Eye on guardianshipThe reforms have had an unwitting consequence, observers note - competition with arch-nemesis Iran to be more liberal over women's rights. Tehran recently relaxed its crackdown on women failing to wear the compulsory headscarf.But Saudi activists say social change will only be cosmetic without dismantling the kingdom's rigid guardianship system, which requires that women seek permission from a male relative to study, travel and other activities.That leaves many vulnerable to the whims of a controlling father, a violent husband or a vengeful son.Horror stories have regularly surfaced.Women inmates are often reported to be stuck in prisons after completing their terms because they were not claimed by their guardians. One Saudi woman told AFP how she was stuck in limbo, unable to even renew her passport, when her father, her only male guardian, slipped into a coma after an accident."If I could choose between the right to drive or the right to end guardianship, I would choose the latter," a women's activist said on the condition of anonymity.'Not revolution, but evolution' Authorities appear to be slowly dismantling the many injustices against women ingrained in the law.Saudi women now no longer need male permission to start a business. Saudi Arabia also recently annulled the "house of obedience" article in its marriage law, which grants a husband the right to summon his wife to his home against her will.The reform introduces a novel concept in married life: mutual consent."This is not a revolution, this is evolution," Hoda al-Helaissi, a member of the advisory Shura Council, told AFP, referring to newfound social liberties."It's a rite of passage for women."Back at Bukhari's home in neighboring Dammam city, she embraced her youngest son Mohammed - who stood by her even as his brothers decried her gas station job as a shocking breach of tradition.But the 16-year-old prefers to hide his mother's job from his peers, hoping to protect her from even more insults."Maybe five years from now it will be normal to see women at gas stations," he said, kissing his mother's hand.