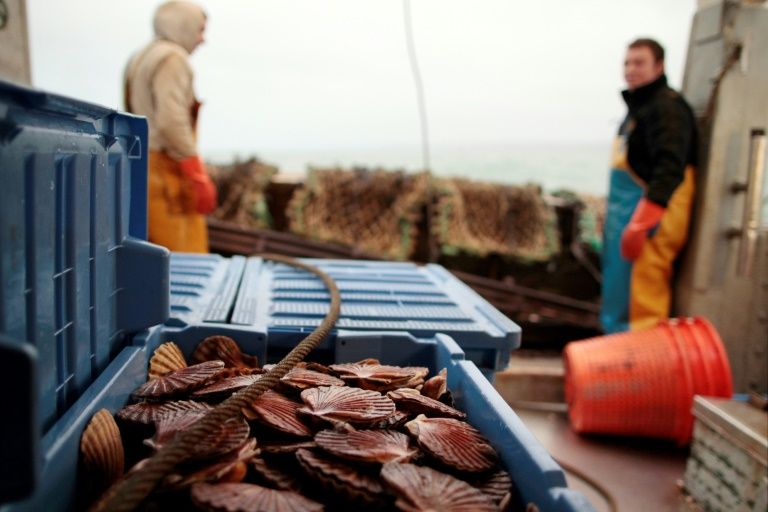 Scallops shell are seen onboard a fishing boat on December 18, 2014 off Port-en-Bessin, northwestern France. (File Photo)

French and British fishermen clashed in the English Channel on Tuesday over a hoard of scallops, French sources said, the latest flare-up in a years-long war over the prized shellfish.

The British were heavily outnumbered at five boats to around 35 French vessels, according to maritime official Ingrid Parot, whose ship was sent to intervene in the scallop-rich waters off Normandy.

"The French went to contact the British to stop them working and they clashed with each other. Apparently there was stone-throwing, but no injuries or damage," said Normandy fishing chief Dimitri Rogoff.

"The French almost surrounded the British," Rogoff said, prompting the British to flee.

Rogoff said "around 40" French boats had gathered overnight in protest at British "pillaging" of the scallop supply.

French boats only have the right to fish for scallops from October 1 until May 15 to allow local stocks to regenerate, but the British do not face the same restrictions.

The French trawlermen wanted the British to stay north of a line running from Barfleur in Normandy to Cap d'Antifer to the east to avoid running supplies down, Rogoff said.

Tensions have been high between British and French fishermen for several years, leading to angry disputes that have been dubbed "Scallop Wars".

In some years the two sides have been able to come to partial agreements, but "not this year", said Rogoff.