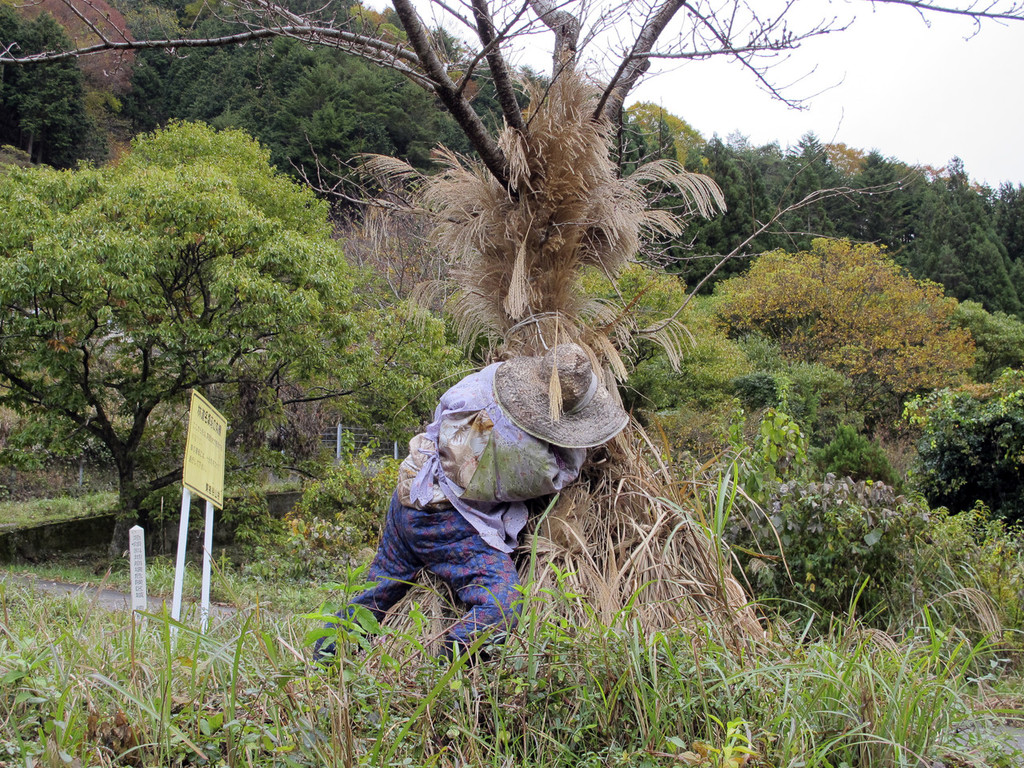 In the tiny village of Nagoro, deep in the mountains of western Japan, the wind howls down a deserted street with not a living soul to be seen.

Yet the street appears busy, dotted with life-size dolls that outnumber humans 10 to one, the product of a one-woman bid to counter the emptiness and loneliness felt in Nagoro, like many Japanese villages, decimated by depopulation.

Nagoro, around 550 kilometers southwest of Tokyo, has become known as the valley of dolls after local resident Tsukimi Ayano began placing scarecrows on the street to inject some life into her depopulated village.

"Only 27 people live in this village but the number of scarecrows is tenfold, like 270," the 69-year-old doll maker said in an interview at her home.

It all started 16 years ago when the dexterous Ayano created a scarecrow dressed in her father's clothes to prevent birds eating the seeds she had planted in her garden.

"A worker who saw it in the garden thought it really was my father. ... He said hello but it was a scarecrow. It was funny," recalled Ayano.

Since then, Ayano has not stopped creating the life-size dolls, made with wooden sticks, newspapers to fill the body, elastic fabrics for skin and knitting wool for hair.

The secret to breathing life into the dolls? Applying pink color to the lips and cheeks with a make-up brush, revealed Ayano.

At the local school, she has placed 12 colorful child-sized dolls at desks, positioned as if part of a lively class poring over their books.

The school closed seven years ago. "Now there are no children. The youngest person here is 55 years old," Ayano said.

Down the street, a "family" of scarecrows lounges in front of an abandoned grocery shop while a doll dressed as an old farmer window-shops next door.

While never humming with people, Ayano remembers as a child that Nagoro was once a well-to-do place with nearly 300 residents.

Nagoro's plight is replicated all around Japan, as the world's third-largest economy battles a declining population, low birthrate and high life expectancy.

The latest government report shows that 27.7 percent of a population of 127 million are aged 65 or older. According to experts, around 40 percent of Japan's 1,700 municipalities are defined as "depopulated."

Young people started to leave for Tokyo in the 1960s, said Takumi Fujinami, an economist at the Japan Research Institute.

"The economy was booming in Tokyo and industrial areas at that time. They were the only places people could earn money, so a lot of young people moved there," he said.

Japanese Prime Minister Shinzo Abe has pledged to revive regions outside Tokyo by pumping in tens of billions of yen, but this is not enough to stop young people from leaving their hometowns to work in Tokyo, Fujinami said.

"It's important to increase income or improve working conditions for young people in rural areas. We need to create communities where young people can make a long-term living," Fujinami said, adding that subsidizing them to move in is not enough.

While there is little evidence of citizens returning to Nagoro, Ayano's dolls have attracted flesh-and-blood people from as far afield as the US and France.

"I hope Nagoro will become lively again and many people come here for sightseeing," Ayano said.