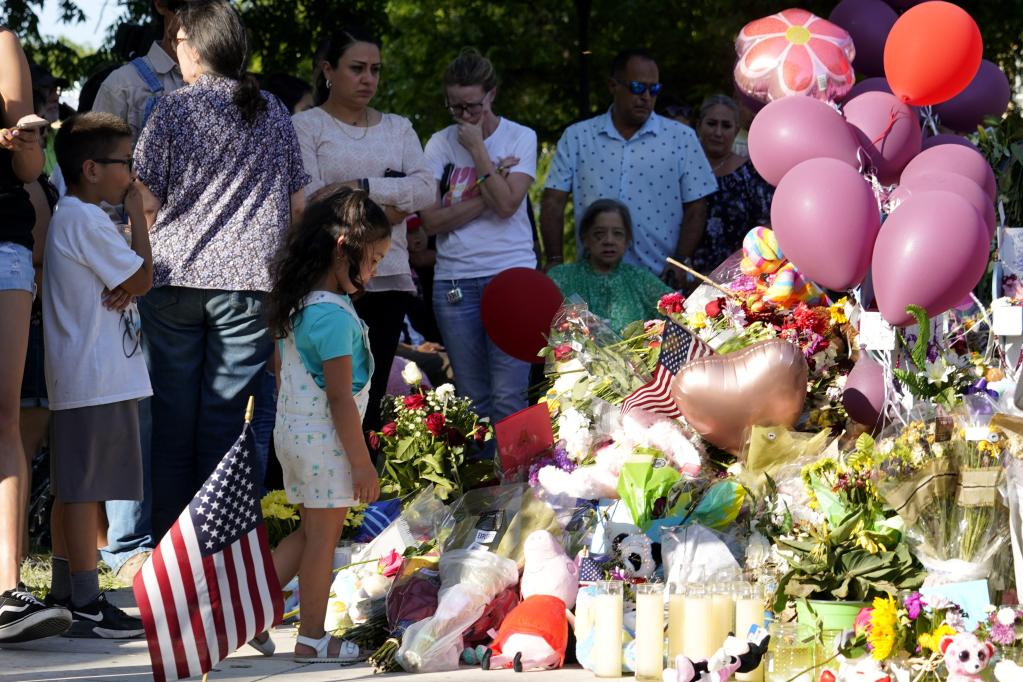 People mourn for victims of a school mass shooting at Town Square in Uvalde, Texas, the United States, May 28, 2022. (Photo: Xinhua)

US school shootings rose to their highest number in 20 years between 2020 and 2021, according to a new report.

The National Center for Education Statistics (NCES) report on safety in schools, released Tuesday, found that there were 93 school shootings at public and private schools nationwide. They led to 43 deaths and 50 injuries, despite the country being in a pandemic and many children learning remotely.

The incidents represented the highest increase of school shootings since data collection began and was in sharp contrast to the school years of 2000 to 2001, when there were 23 shootings.

Concern over school shootings rose following the mass shooting at Robb Elementary school in Uvalde, Texas, after an 18-year-old man opened fire with an AR-15 rifle, killing 19 students and two teachers in May.

NCES Commissioner Peggy Carr said in a press release: "Although the rate of nonfatal violent victimization at school for 12-to-18-year-olds was lower in 2019 than in 2009, there were more school shootings with casualties in 2021 than in any other year since data collection began in the early 2000s, increasing from 11 in 2009 to 93 in 2021.

"While the lasting impact of these crime and safety issues cannot be measured in statistics alone, these data are valuable to the efforts of our policymakers, school officials, and community members to identify and implement preventive and responsive measures."

The report, part of a joint effort with the Bureau of Justice Statistics, looked at school shootings between July 1, 2020, to June 3, 2021. It found that there were an additional 53 school shootings during this time but with no fatalities.

The report's authors also found that the year 2020 to 2021 was the first since data collection began in which fewer than half of schools that had shootings were high schools.

The 31-page report defined school shootings as those where there was a shooting with a firearm, where a gun was brandished on school property and when a gun incident took place on school property during remote learning amid the coronavirus pandemic.

To ramp up gun safety after a spate of deadly mass shootings nationwide this year, a bipartisan group of lawmakers in Congress passed the first package of gun safety legislation in nearly 30 years.

It closes the so-called "boyfriend loophole", which keeps guns away from a person in a relationship but is unmarried and has been convicted of abuse.

President Joe Biden signed the bill into law on June 25.

Schools are also spending vast amounts of money to improve safety. Last year, schools and colleges spent $3.1 billion on extra security equipment, according to The New York Times. In 2017, the amount spent on similar equipment was $2.7 million, according to Omida, a market research company. Safety equipment that schools are buying include high-resolution security cameras, alert systems, weapons detectors and wireless panic buttons.

Mo Canady is executive director of the National Association of School Resource Officers (NASRO), a not-for-profit that has trained school-based law enforcement officers and school administrators to protect schools, students, faculty, and staff since 1991. He estimates there are 25,000 to 30,000 SROs in schools nationwide.

He said his resource officers have also noticed an increase in gun violence during the past few years.

"Just comparing the same time frame in the fall of 2019 to the fall of 2021, gun-related incidents are up significantly in and around school campuses," Canady told China Daily.

He added that many school resource officers are trying to help children avoid violence by "spending more time in the informal counselling role helping students with issues that they're having whether it's at home or school. And trying to help counsel them through that."