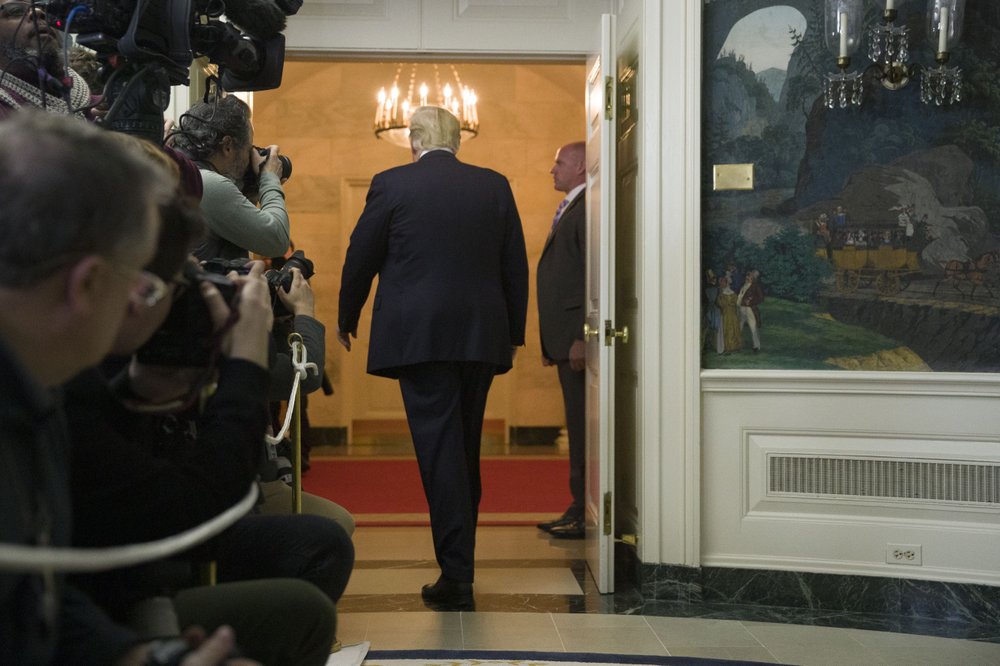 President Donald Trump departs after speaking about the partial government shutdown, immigration and border security in the Diplomatic Reception Room of the White House, in Washington, Saturday, Jan. 19, 2019.(Photo: AP)

The Latest on the partial government shutdown (all times local):

Sen. Chuck Schumer of New York said on Sunday he thinks Democrats will block the measure to give the president $5.7 billion for the border wall. The proposal would also extend temporary protections for some young people brought to the U.S. illegally as children and immigrants who fled disaster zones.

Majority Leader Mitch McConnell is to bring Trump’s proposal to the Senate floor for a vote on Tuesday.

Schumer also pushed legislation that would protect government workers who can’t pay their bills because of the government shutdown. He says the measure would shield workers from eviction or home foreclosure, repossession of their cars and penalties for late payment of bills and student loans.

The impacts of the record-breaking partial government shutdown are continuing to escalate.

The Transportation Security Administration reports that many of its staff have been calling out of work because they can’t afford to get there.

They say that, “many employees are reporting that they are not able to report to work due to financial limitations.”

TSA has been experiencing far higher unscheduled absences during the shutdown, with 8 percent of employees skipping work on Saturday compared to 3 percent a year ago.

That has forced screening area closures at some airports, including at Baltimore/Washington International Thurgood Marshall Airport, where “Checkpoint A” was closed Saturday.

President Donald Trump on Sunday appeared to threaten to target millions of people living in the country illegally if he doesn’t get funding for his border wall.

Trump tweets that, “there will be no big push to remove the 11,000,000 plus people who are here illegally,” but adds: “be careful Nancy!” He’s referring to House Speaker Nancy Pelosi, who rejected his proposal to trade wall money for temporary protections for some immigrants.

Trump is also pushing back on criticism from the right that his proposal represents “amnesty.” But he says he’s open to using “amnesty” on “a much bigger deal” down the line.

Many, including Vice President Mike Pence, have defined the word “amnesty” as permanent status or a pathway to citizenship for immigrants in the country illegally.

Vice President Mike Pence says it was “disappointing” that House Speaker Nancy Pelosi rejected President Donald Trump’s Saturday proposal to trade temporary protections for some immigrants for billions in funding for his border wall before he’d even delivered his speech.

She made clear the plan was a nonstarter in the House after details were reported.

But Pence says in an interview with “Fox News Sunday” that he’s still optimistic the plan will gain traction after Senate Majority Leader Mitch McConnell brings it to the Senate floor on Tuesday.

Pence says Trump “set the table for a deal that will address the crisis on our border, secure our border and give us a pathway” to reopen the government.

Democrats say they support border security but reject a wall.

President Donald Trump is lashing out at House Speaker Nancy Pelosi for rejecting his proposal to exchange temporary protections for some immigrants for $5.7 billion for his border wall.

Trump’s reaction came in a series of Sunday morning tweets. He’s accusing Pelosi and other Democrats of putting politics ahead of security and claims, without evidence, Pelosi “has behaved so irrationally & has gone so far to the left that she has now officially become a Radical Democrat.”

Pelosi and other Democrats have rejected Trump’s latest proposal and remain opposed to the idea of building a wall along the southern border with Mexico.

The shutdown that has left hundreds of thousands of workers without paychecks is now in its fifth week.

But Trump’s plan seems to stand little chance of getting the 60 votes needed to move ahead in the GOP-controlled the Senate even as Sen. Mitch McConnell pushes it.

Trump has offered to extend temporary protections for young people brought to the U.S. illegally and for those who fled disaster zones. In exchange the president wants the Democrats to vote in favor of $5.7 billion for the wall he seeks between the U.S. and Mexico.

Delaware Sen. Chris Coons, a Democrat seen by White House as a possible partner on immigration negotiations, says he won’t support it. And Republican Sen. Lisa Murkowski of Alaska, another key centrist, says she’ll study the details of the president’s plan. She isn’t saying whether she’d vote for it.

President Donald Trump calls it a commonsense compromise, but Democrats are labeling his proposal to end the government shutdown a “nonstarter.”

At issue is Trump’s offer to extend temporary protections for young people brought to the U.S. illegally and for those who fled disaster zones. In exchange the president wants the Democrats to vote in favor of $5.7 billion for the wall he seeks between the U.S. and Mexico.

Despite the uphill battle Trump’s proposal faces in Congress, Senate Majority Leader Mitch McConnell says he’ll take action on the proposal in the Senate this coming week. McConnell calls it a fair compromise for ending the shutdown.