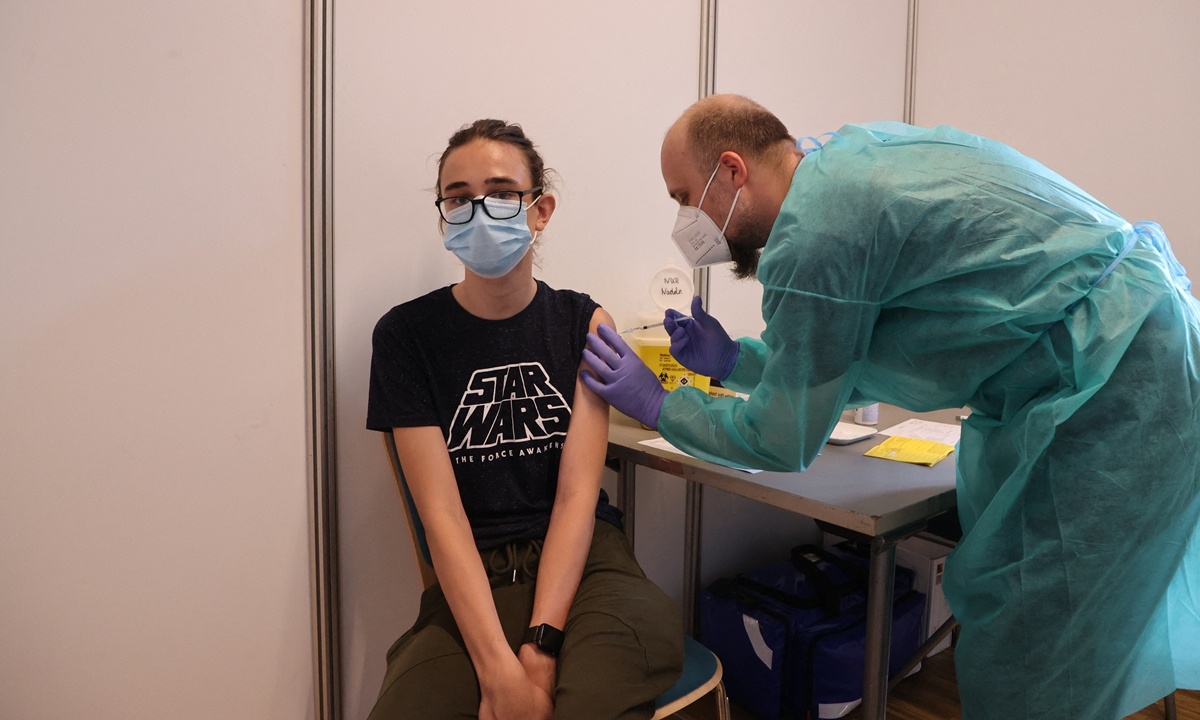 A kid receives his first vaccine dose against COVID-19 on Saturday in Weimar, Germany. (Photo: agencies)

In the feverish rush to study the coronavirus as it scorched its way across the planet, the unprecedented demand for information has put any mistakes under the glare of world's attention and tested public trust in science, experts say.

Although serious problems are rare, in a health emergency even small errors can ripple through scientific research and onto the internet, magnifying people's uncertainty.

"I think the combination of a pandemic with social media and people deliberately putting out misinformation, that gets a lot of people thinking that all science is fraudulent, which it is not," scientific integrity consultant Elizabeth Bik told AFP.

Bik has dedicated her career to ensuring mistakes - or worse - do not slip through the net.

She publishes her discoveries on Twitter, on her blog and in comments on the scientific platform PubPeer, then lets the authors or the editors of scientific journals respond or take action.

It has not always made her popular - she has faced an online backlash and even legal action - but she is adamant that the pressure to publish quickly heightens the risk of mistakes.

One high-profile example came in 2020 when the Lancet medical journal withdrew a study that found hydroxychloroquine - touted as a treatment by the then US president Donald Trump among others - was ineffective against COVID-19, and even dangerous.

The paper came under scrutiny from fellow scientists, whose concerns over the reliability of the underlying data highlighted serious problems with the research.

Ultimately hydroxychloroquine was found by other reputable studies not to work against the coronavirus, but the retraction spread confusion.

Bik said that the incident made many people worry that "all science papers cannot be trusted."

With research funding and even job security often linked to how many articles an individual or institution publishes, scientists have long complained of incentives to hurry through study papers.

Catherine Paradeise, a sociologist and professor emeritus at the University of Marne-la-Vallee in France, told AFP that the pressures can have adverse effects.

She points to a tendency to put quantity ahead of quality or "fiddle a little bit with the conditions of a study" to save time.

Her concern was echoed in a March report commissioned by a committee of the French senate.

Investigators said they found "a systematic problem inherent to the world of research" that could lead to unethical practices due to "the race to publish and pressure to produce positive results."

One of the investigating senators said that COVID-19 had served to "amplify the difficulties of scientific integrity" and to degrade "confidence between society and the world of science."

"Verifying integrity is how we guarantee that science is carried out in a satisfactory way and serves a purpose," Paradeise said.

In the early 1990s when the US created the Office for Research Integrity, their main concern was ensuring ­funding was being put to good use - a worry shared by private businesses.

"There were enough ­scandals for the US legislature to decide to be pickier about where to put their financing," said Ghislaine Filliatreau, a scientific integrity delegate at the Inserm research institute.

"When we do research we have to retrace everything we do, it's fundamental to best practices... we have to be able to ask those involved to show us their lab notes, their protocols, tell us who did what during the experiment."

But she stressed that serious cases - like extensive plagiarism or fabrications of experiments or results - are rare.

Bik stumbled into her role by accident in 2013, when she did an internet search of a sentence from one of her papers.

"I think that was the moment that sort of changed my life in retrospect, because I did find that my sentence had been used by another group," she said.

Bik found lines taken from other people's work throughout the whole study.

The discovery started almost a decade of scientific digging and since 2019, her full-time job.

The seasoned whistle-blower is widely supported by her peers, although she is no stranger to online hostility.

But the pandemic has unleashed a harsher response from some corners of the scientific world.

When Bik raised concerns about what she saw as anomalies in dozens of studies by controversial French doctor Didier Raoult, several of which claimed to show the benefits of treating COVID-19 patients with hydroxychloroquine, she was subjected to an intense backlash.

Bik was even doxxed - her private information published online - by a member of Raoult's team.

She is now being sued by Raoult for harassment and an investigation was opened on May 2 - an escalation that many fear will have a severe chilling effect on scientific debate.

More than 1,000 researchers around the world have signed an open letter supporting her.

One of the co-signatories told Science magazine that legal threats pose a "substantial threat to science as a social system."

It has not put Bik off her mission.