Scientists have found a rapid way of creating magnesite, a mineral that can absorb carbon dioxide from the atmosphere, offering a potential solution to global warming. 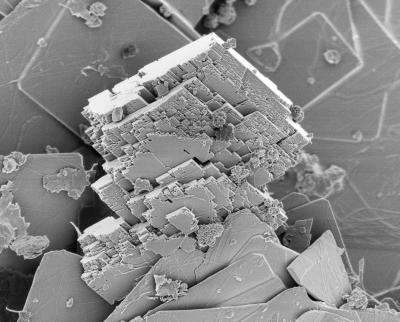 The research, presented recently at the Goldschmidt geochemistry conference in Boston, explained how magnesite can form at low temperatures and offered a way to dramatically accelerate its crystallization.
Magnesite is a naturally occurring rock used in jewelery and for various industrial processes. Every ton of magnesite is capable of removing about half a ton of CO2 from the air. However, the process normally takes thousands of years in nature at Earth's surface.
In the lab, the researchers showed the mineral could form within 72 days by using polystyrene microspheres as a catalyst.
"This process takes place at room temperature, meaning that magnesite production is extremely energy efficient," said Professor Ian Power of Trent University, Canada, who led the study.

"For now, we recognise that this is an experimental process, and will need to be scaled up before we can be sure that magnesite can be used in carbon sequestration," he added.