The atmosphere of Venus contains traces of phosphine gas - which on Earth can be attributed to living organisms - scientists said on Monday, in a fresh insight into conditions on our nearest planetary neighbor.

Conditions on Venus are often described as hellish with daytime temperatures hot enough to melt lead and an atmosphere comprised almost entirely of carbon dioxide. 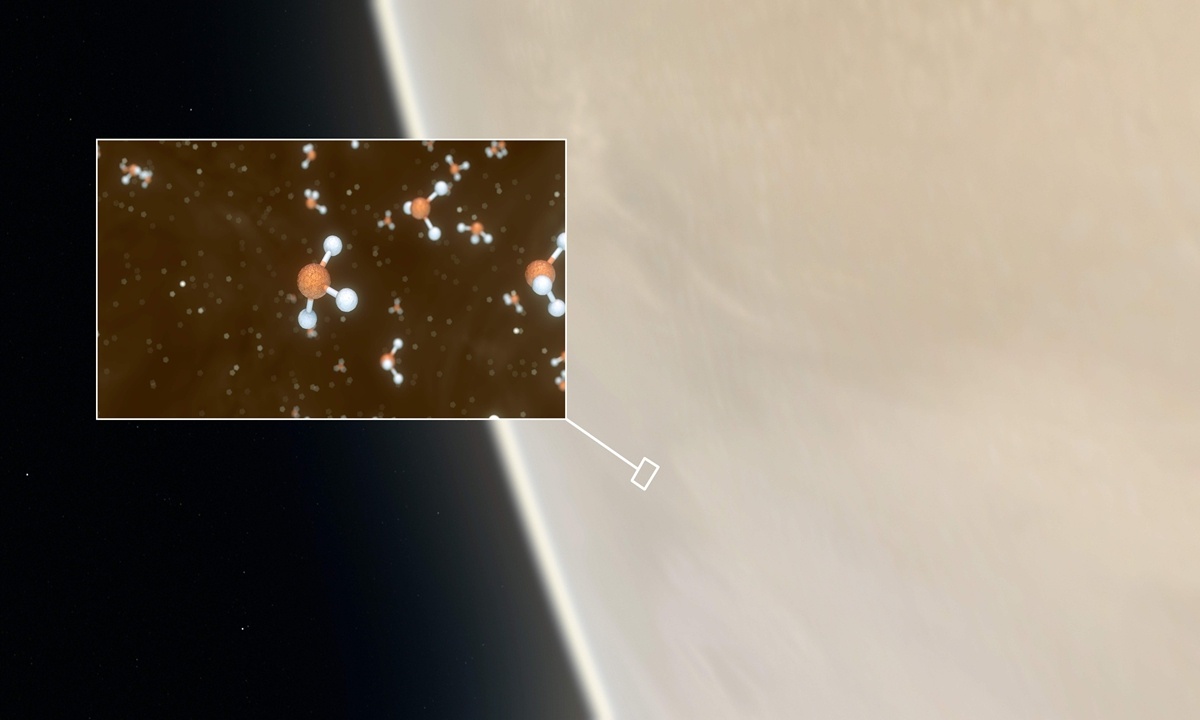 A handout photo made available on September 14, 2020 by the European Southern Observatory shows an artistic impression depicting our Solar System neighbour Venus, where scientists have confirmed the detection of phosphine molecules, a representation of which is shown in the inset. (Photo: VCG)

A team of experts used telescopes in Hawaii and Chile's Atacama Desert to observe Venus' upper cloud deck, around 60 kilometers from the surface.

They detected traces of phosphine, a flammable gas that on Earth often occurs from the breakdown of organic matter.

Writing in Nature Astronomy, the team stressed the presence of phosphine did not prove the presence of life on Venus. However, as the clouds swirling about its broiling surface are highly acidic and therefore destroy phosphine very quickly, the research did show that something was creating it anew.

The researchers conducted several modeling calculations in a bid to explain the new phosphine production.

They concluded that their research provided evidence "for anomalous and unexplained chemistry" on Venus.

Lead author Jane Greaves, from Cardiff University's School of Physics and Astronomy told AFP that the presence of phosphine alone was not proof of life on Earth's next-door neighbor.

"I don't think we can say that - even if a planet was abundant in phosphorus, it might lack something else important to life - some other element, or conditions might be too hot, too dry," she said.

Greaves added that it was the first time phosphine had been found on a rocky planet other than Earth.

Reacting to the study, Alan Duffy, an astronomer from Swinburne University and Lead Scientist of The Royal Institution of Australia, said while it was tempting to believe that the phosphine was produced by life-forms, "we have to rule out all possible other nonbiological means of producing it."

He called the finding "one of the most exciting signs of the possible presence of life beyond Earth I have ever seen."

Venus, which rotates in the opposite direction to Earth and where a day lasts 243 times longer, is a subject of intense interest among astronomers.

It is so close and of such similar size to our home planet that some experts believe it serves as a warning of the dangers of runaway climate change.