WORLD Scientists estimate COVID-19 fatality rate in NYC can be no less than 0.5 pct

Scientists estimate COVID-19 fatality rate in NYC can be no less than 0.5 pct 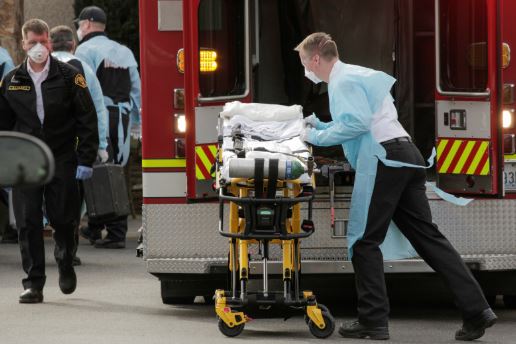 SAN FRANCISCO, April 25 (Xinhua) -- Extrapolating from the Italian data, University of California, Berkeley, and Lawrence Berkeley National Laboratory data scientists estimated that the COVID-19 fatality rate in New York City can be no less than 0.5 percent, or one of every 200 people infected.

According to the research released on Friday, the team conducted an analysis for all Italian towns that reported daily death data and for all age groups, using a counterfactual analysis: estimating the expected number of deaths daily between January and April 2020, based on the previous five years, and comparing those numbers with reported deaths. The excess is assumed to be due to COVID-19. The comparison indicated that the fatality rate in Italy for those infected with the new coronavirus is at least 0.8 percent.

"Our observation suggests COVID-19 kills the weakest segments of the population," said Uros Seljak, a UC Berkeley professor of physics and senior author of the study.

According to the study, these differing fatality rates can explain the observed higher number of deaths among younger people in New York City. Because the population there is younger than in Italy, more deaths among young people are expected, despite their lower fatality rate. The researchers predicted that about 26 percent of all deaths from COVID-19 in New York City will be among those younger than 65.

The researchers emphasized that the numbers the team came up with are lower limits since deaths in many Italian towns are not fully up to date, and uncertainty about the fatality rate resulted from delays in testing, for the true rate of infection in the general population is needed to calculate what percentage of infected people die.

"Some of my colleagues think that we have been overly conservative, which might be true," Seljak said. "We have just accounted for the people who have died up until today, but people are still dying."