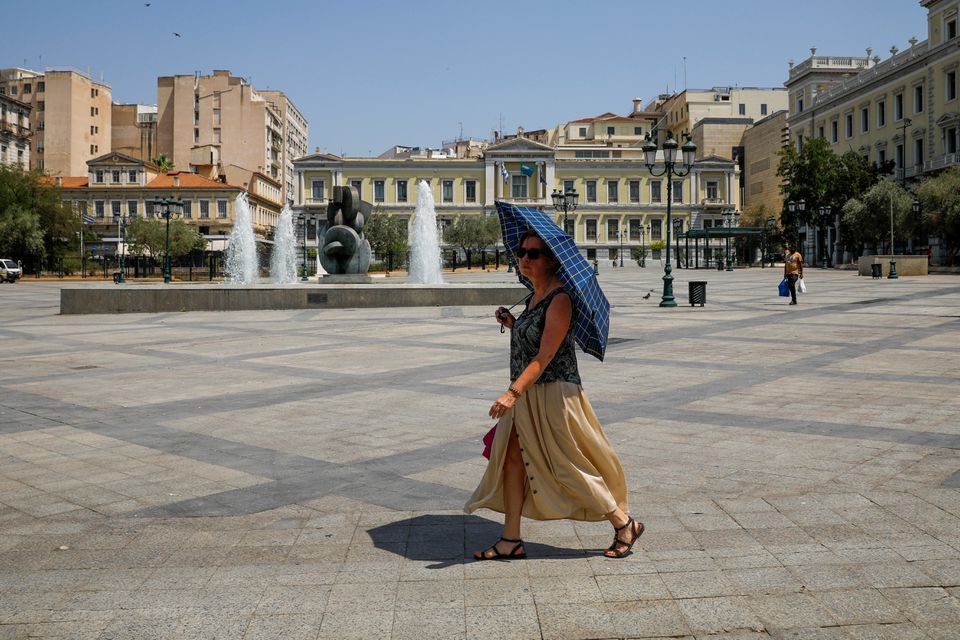 A woman uses an umbrella to protect herself from the sun during a heatwave in Athens, Greece, July 30, 2021. (Photo: Agencies)

Scientists in Greece are planning to name and rank heatwaves in an effort to raise awareness of what climate experts have described as "silent killers".

The initiative would be a preventative measure, like that used for storms, allowing policymakers to quickly enable policies to protect populations in the event of emergencies.

Devastating infernos have erupted across the Mediterranean region in recent weeks, triggered by extreme heat. A temperature of 48.8 C was measured in Sicily, Italy on Aug 11, which is the hottest temperature ever recorded in Europe, and Turkey has suffered, too.

Fires have ravaged swathes of land across Greece, destroying homes and leading to mass evacuations, most dramatically on the island of Evia, east of the capital Athens.

In an interview with The Observer newspaper, Kostas Lagouvardos, research director at the National Observatory of Athens, said the extreme heat had been "underestimated" and insisted that both state authorities and citizens must be made more aware of the danger.

"This very hot summer has given us a snapshot of a future climate in 20 or 30 years' time when we're likely to have very long periods of very high temperatures," he said.

"It's extreme behavior but it could become the norm. Unlike other adverse weather events, you can't see extreme heat.

"We believe people will be more prepared to face an upcoming weather event when the event has a name. They'll become more aware of the possible problems it could cause to their lives and to their properties … heatwaves cause a lot of deaths; they don't make noise and they may not be visible but they're a silent killer."

A recent draft report from the United Nations warned that warming across the Mediterranean will be about 20 percent higher than global averages in the decades to come, with scientists saying annual mean temperatures in the region will likely increase by up to 2 C over the next 30 years.

In an interview with CNN two weeks ago, the prime minister of Greece, Kyriakos Mitsotakis, said climate change was to blame for temperatures that had effectively "turned the country into a powder keg".

He said: "This is the climate crisis striking here and now. We need to drastically change the way we produce electricity, build our buildings, grow our food and move around."

Following criticism for the way the government had handled the crisis, the leader announced a 500 million euros ($584 million) relief package.

Studies have noted that Athens is mainland Europe's hottest metropolis, and therefore likely to suffer more from the consequences of a warmer planet.

The capital recently became the first European city to appoint a chief heat officer, Eleni Myrivili. The academic and former vice-mayor told The Observer that measuring heatwaves is vital.

She said: "The whole idea of making heatwaves more visible by naming and categorizing them in terms of severity would be a turning point. It would help people understand the danger that is looming while enabling decision-makers to trigger policies that would better protect them."