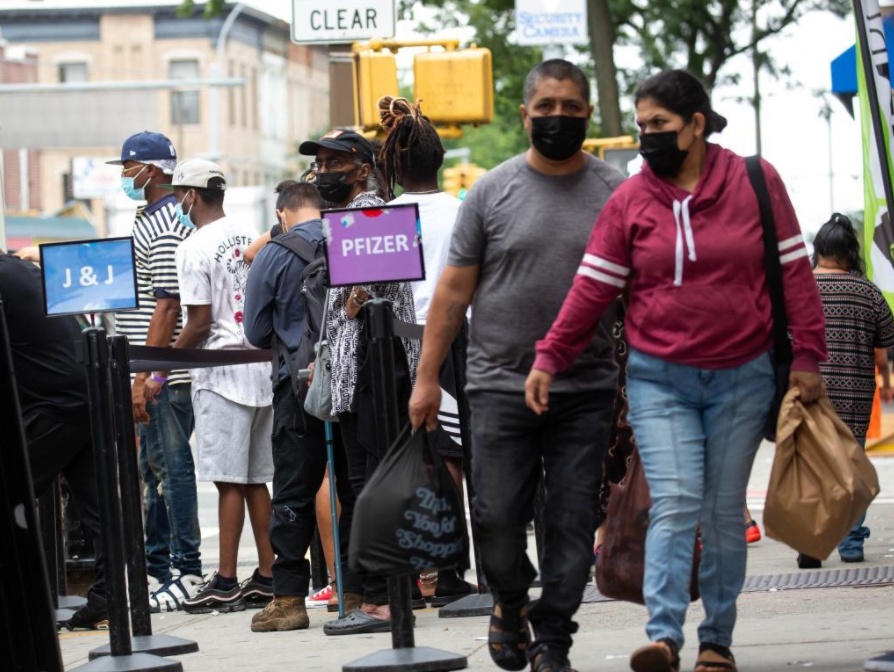 People wait in line at a mobile COVID-19 vaccination center in the Brooklyn borough of New York, the United States, Aug 18, 2021. (Photo: Xinhua)

The Biden administration's plan to provide COVID-19 vaccine boosters is based on concerns that a decrease in the vaccines' ability to protect against milder infections could also mean people will have less protection against severe illness, a premise that has yet to be proven, scientists said on Thursday.

US officials, citing data showing waning protection against mild and moderate illness from the Pfizer-BioNTech and Moderna vaccines more than six months after inoculation, on Wednesday said boosters will be made widely available starting on Sept 20.

The additional dose will be offered to people who received their initial inoculation at least eight months earlier.

"Recent data makes clear that protection against mild and moderate disease has decreased over time. This is likely due to both waning immunity and the strength of the widespread Delta variant," US Surgeon General Vivek Murthy told reporters.

"We are concerned that this pattern of decline we are seeing will continue in the months ahead, which could lead to reduced protection against severe disease, hospitalization, and death."

Data on so-called "breakthrough" infections in vaccinated people shows that older Americans have so far been the most vulnerable to severe illness.

As of Aug 9, almost 74% of the 8,054 vaccinated people that were hospitalized with COVID-19 were above the age of 65, according to the US Centers for Disease Control and Prevention. Almost 20% of those cases ended in deaths.

Based on available data on vaccine protection, it is not clear that younger, healthier people will be at risk.

"We don't know if that translates into a problem with the vaccine doing what is most important, which is protect against hospitalization, death, and serious disease. On that, the jury is still out," said Dr. Jesse Goodman, an infectious disease expert at Georgetown University in Washington and a former chief scientist at the US Food and Drug Administration.

Several countries have decided to provide booster shots to older adults and people with weak immune systems. European Union officials said on Wednesday they do not yet see a need to give booster shots to the general population.

Other experts said the US plan requires thorough vetting by the FDA and a panel of outside advisers to the CDC. A meeting of those advisers to discuss boosters set for Aug 24 is being rescheduled, the CDC said on Thursday on its website.

The Department of Health and Human Services, which oversees the CDC and FDA, did not immediately respond to a request for comment.

Some experts questioned the focus on booster shots when around 30% of eligible Americans have yet to get even a first vaccine dose, despite new COVID-19 cases and deaths surging across the country.

"The more important thing, I think, at this point than boosters is making sure we get the vaccine in any arm that hasn't had one as fast as we can," said Dr. Dan McQuillen, an infectious disease specialist in Burlington, Massachusetts, and the incoming president of the Infectious Diseases Society of America.

All experts interviewed by Reuters also emphasized the need to inoculate the vast number of people around the world who have yet to access COVID-19 vaccines.

"You could end up in situation where you are chasing your tail, giving more and more boosters in the US and Western Europe, while more dangerous variants are coming from other places," said Dr. Isaac Weisfuse, epidemiologist and adjunct professor at Cornell University Public Health.

"In reality you should be vaccinating the rest of the world to avoid new variants."