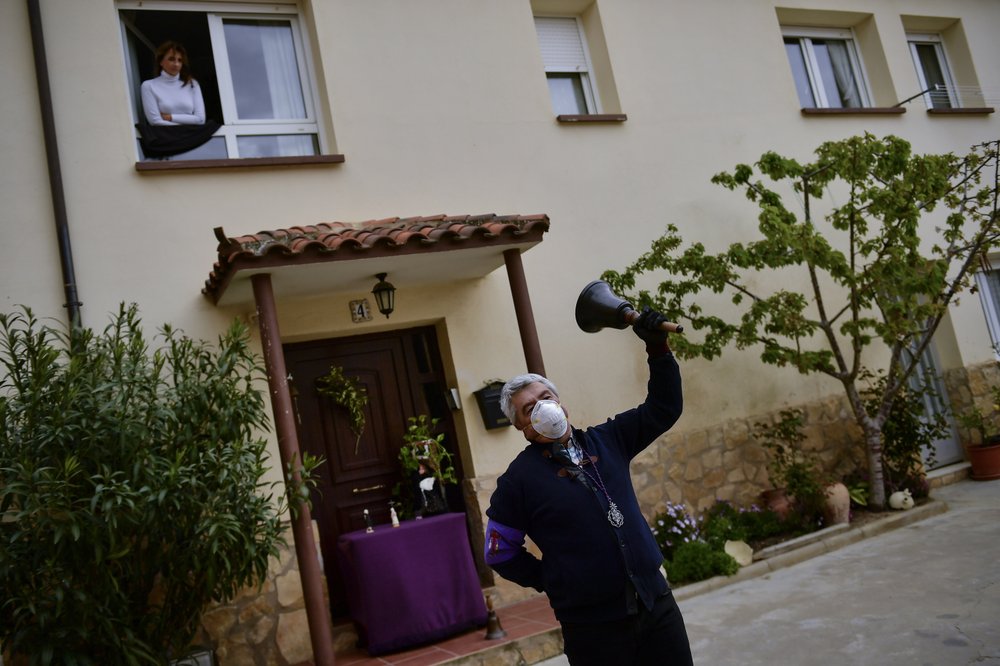 Begona Diaz, 58, looks at her husband, Jose Mari Perez, 59, a member of "Santa Vera Cruz'' brotherhood known as ''Los Picaos'' wearing a mask for protection while ringing a bell outside of his house on Maundy Thursday after celebrations were cancelled due to the outbreak of coronavirus, in San Vicente de La Sonsierra, northern Spain, Thursday, April 9, 2020. COVID-19 causes mild or moderate symptoms for most people, but for some, especially older adults and people with existing health problems, it can cause more severe illness or death. (Photo: AP)

Spanish authorities say they trust that plans to allow the return of nonessential workers to factories and construction sites next week won’t cause a significant resurgence in coronavirus infections, as some scientists have warned.

The move would not see a return of commercial activity in restaurants or shops other than supermarkets, pharmacies or newsstands, but has raised questions about the timing in easing some restrictions as the outbreak remains intense.

“We are not under the impression that these measures will increase in an important way the transmission (of the virus),” the spokeswoman of Spain’s health emergency coordination center, María José Sierra, said Friday. “We wouldn’t be adopting them otherwise.”

Some experts had warned that relaxing the two-week lockdown on a broader part of the manufacturing and construction sector comes too early.

Barcelona University’s Dr. Antoni Trilla, who has advised the government in the response to the pandemic, said in a radio interview Thursday that confinement measures should continue.

The doctor, who said the government had not contacted a group of advising scientists ahead of partially lifting the confinement, said: “It is logical to try to return to normalcy in all the economic activity, but this must be accompanied by a good system to detect and isolate and treat the new cases that occur.”

Margarita del Val, a virologist from CSIC, Spain’s main public scientific body, said that loosening the lockdown on industry is “hasty” and that any rollback needs to be be accompanied by a program to isolate new coronavirus carriers. Del Val supported the idea of a Europe-wide mobile app that shows the proximity of people to those who have tested positive.

As a way to lower new possible infections, Health Ministry Salvador Illa announced that the government will distribute reusable masks at subway stations and other public transportation hubs. Shops will remain close and office workers are still encouraged to work from home as Spain essentially rolls back to the lockdown situation two weeks ago, when most people were sheltered at home.

Sierra said that the social distancing that was in place then would be enough to avoid new significant outbreaks.

With 605 new deaths recorded overnight, the lowest increase since March 24, the country continues to see both mortality and contagion rates drop.

The COVID-19 illness has claimed at least 15,843 lives and officially infected 152,446 although authorities have acknowledged that the true scale of the pandemic in the country could be much higher. For most people, the symptoms are mild or moderate.

Friday’s Cabinet meeting approved a 20 billion-euro fund to help small businesses and the self-employed cope with the economic fallout of the outbreak.

Illa said it’s too early to say what comes next for 47 million Spaniards who have been quarantined for four weeks.

A three-week survey of 30,000 households should help understand how many people are or have been infected and guide any further reductions in the lockdown.

The state of emergency has been extended to April 26, although Prime Minister Pedro Sánchez has said he will most likely seek an extension.