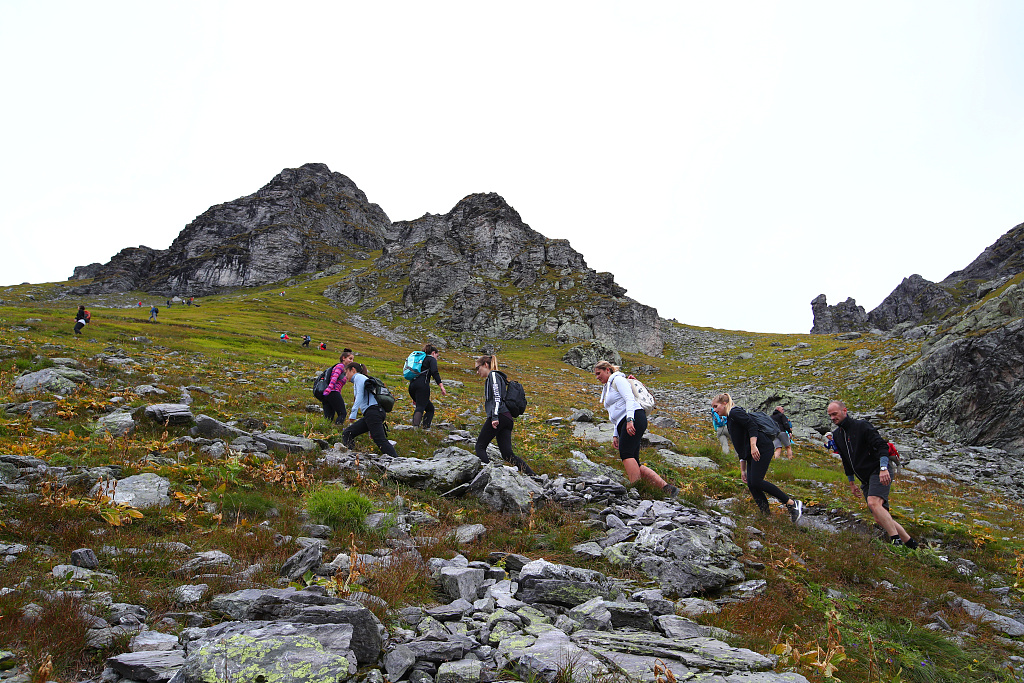 People climb to take part in a mourning ceremony as awareness to climate change, for the disappearing Pizol glacier, in Mels, Switzerland, September 22, 2019. (File photo: VCG)

MADRID, Dec. 6 (Xinhua) -- Leading scientists warned that faster and stronger climate change is threatening the Earth and humankind as extreme weather has become a "new normal," according to a report presented to UN climate chief on Friday.

Named "The 10 New Insights in Climate Science," the report found that climate change is forcing people to reconsider the notion of an extreme event. What was once considered unlikely or rare - is becoming part of a "new normal."

The record-breaking extreme weather and climate events have continued to dominate the headlines in 2019, with the impact of such events going beyond mere record setting and environmental damage, according to the report.

"The world is not on track," "climate change is faster and stronger than expected," writes the report. It says that despite increasing drivers of reduced emissions, the fossil industry is still growing and global leaders are not yet committing to the necessary emissions cut.

Based on some of the latest findings in climate science and compiled in an easy-to-read guide, the report highlights the most recent advances over the last 12 months in the scientific understanding of the drivers, effects and impacts of climate change, as well as societal responses.

The report says that undernutrition will be the greatest health risk of climate change with declining agricultural productivity, particularly in drylands in Africa and high mountain regions of Asia and South America. Increasing concentrations of carbon dioxide will reduce the nutritional quality of most cereal crops.

"Science must be our common language, and what the science tells us is very clear: we are facing a climate emergency. We must act urgently," said Patricia Espinosa, executive secretary of the United Nations Framework Convention on Climate Change (UNFCCC), who attended the press briefing of the publishing of the report.

The report also notes that climate change is now threatening biodiversity. Failure to address and adapt to climate change would have disastrous consequences for hundreds of millions of people, mainly the very poorest, who are most vulnerable to climate-related disasters like floods and drought.

Climate change will also impact on society. The report says that public opinion polls indicated that an increasing number of citizens in various countries are seriously concerned about climate change, and recent massive civil protests are getting close to the thresholds where the society could expect "tipping" of some socio-economic systems, according to the report.

The report referred to the "Fridays for Future" climate movement initiated by Swedish girl Greta Thunberg, who had arrived in Madrid on Friday after a nearly three-week journey across the Atlantic by catamaran.

The Spanish national police said that about 15,000 activists hit the streets of Madrid on Friday evening together with Thunberg to demand more ambitious actions from countries joining the COP25. The organizers of Fridays for Futures expected that more than 500,000 people would come.

"The big majority of political and business leaders have understood that we have a problem, but they haven't understood the degree of the problem. Now we have enough scientific evidence in support of our climate emergency," Johan Rockstroem, director of the Potsdam Institute for Climate Impact Research in Germany who is a member of the editorial board of the report, told Xinhua on the sidelines of the event.