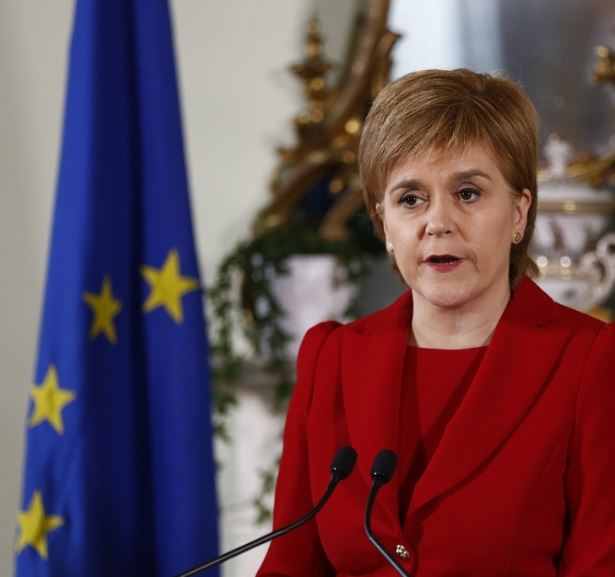 Sturgeon, leader of the Scottish Nationalist Party (SNP), published an analysis of the impact of May's deal on the people of Scotland, saying compared to staying in the EU, it will cost every resident of Scotland thousands of dollars.

The SNP's 35 politicians, who represent Scottish seats in the House of Commons, have said they will vote against the Brexit deal when it is debated at Westminster in December.

The assessment claimed the British government's draft agreement with Brussels could cost 1,600 pounds per person by 2030.

The study said it is not even certain that a free trade deal will be agreed between Britain and EU, meaning the cost could be higher.

The study was released 24 hours before May heads to Scotland on the next leg of her round-Britain tour to seek support for her deal.

Commenting on the study, Sturgeon said the analysis shows why the deal agreed by the prime minister is "unacceptable" to the Scottish authorities and "damaging" to the people of Scotland.

"No government of Scotland with the interests of this and future generations at heart could possibly accept it," she said.

"In short, it will make us poorer," said Sturgeon, adding: "Perhaps worst of all, it will take away opportunities from the young people of Scotland and from the generations to come."

Sturgeon added: "Quite simply this is a bad deal, which the UK Government is seeking to impose on the people of Scotland regardless of the damage it will cause. It will not end uncertainty. It will extend it. We are being asked to accept a blindfold Brexit with all the difficult decisions kicked down the road."

Sturgeon said the Scottish authorities will also support a second referendum on EU membership, with the option to remain in the bloc on the ballot paper.

Judges at the European Court of Justice based in Luxembourg concluded a four-hour hearing Tuesday on whether Britain can call off the process of leaving the EU without permission from its 27 member states. The verdict will be given later at a date yet to be decided.

Meanwhile, Prime Minister Theresa May spent the day in Wales and Northern Ireland as part of a "charm offensive" to rally support for her Brexit deal.

At the Royal Welsh Show in Powys, May met farmers and manufacturers to answer questions on the withdrawal deal.

May has remained determined to to see the deal through. "The British people want MPs to get on with a deal and allow the country to come together," she said.