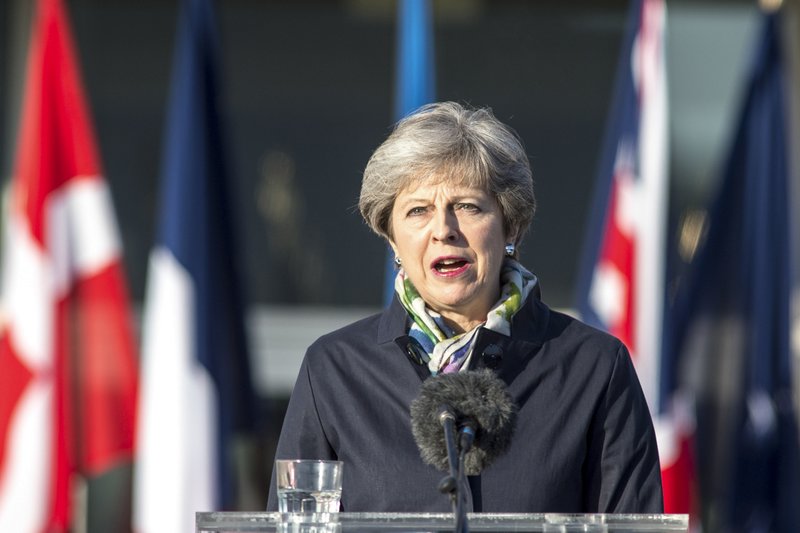 British Prime Minister Theresa May urged Scotland's First Minister Nicola Sturgeon in Edinburgh Tuesday to get behind her blueprint for a soft-Brexit deal as Britain prepares to leave the European Union (EU).

In what the media in Britain described as a showdown between the two leaders, Sturgeon issued a challenge to May to set out a "plan B" for Brexit.

The Scottish broadcaster STV said Tuesday night that Sturgeon expects to revisit the question of Scottish independence from the United Kingdom this fall as the British government continues to flounder on Brexit.

But at the meeting, May urged the Scottish government not to sow division over Brexit, calling on Scottish ministers to get behind her negotiating position with the message: "a good deal for the UK is a good deal for Scotland."

Referring to the recent cabinet meeting at her country retreat Chequers, where the blueprint was agreed, May said: "What the government has put forward in the Chequers agreement and the (government) White Paper is a proposal that delivers on Brexit, that ensures we bring an end to free movement and the jurisdiction of the European Court of Justice, which protects jobs and livelihoods, and is good for every part of the UK."

May continued: "What I want to see is as we sit and and negotiate that deal with the EU, I think it's incumbent on the Scottish government to support the proposals, to be speaking up for those proposals in Europe, rather than sowing the politics of division."

With the British parliament in its summer recess, May's day trip to Scotland was her first domestic appearance since her meeting last week with the French president Emmanuel Macron.

Media reports in Scotland said during her visit to Edinburgh, May came under pressure from Sturgeon to set out more details of what Britain's future relationship with the EU might look like after it leaves the bloc next March.

According to Scotland's independent television broadcaster STV, Sturgeon, who is also leader of the Scottish Nationalist Party, said the half-hour bilateral talks with May failed to allay her fears that Britain is increasingly risking a no-deal Brexit. Sturgeon said her focus is on avoiding a cliff edge Brexit in March.

The STV report said Sturgeon expects to revisit the question of Scottish independence from the United Kingdom as the British government continues to flounder on Brexit.

She said she is likely to make a statement on her plans for Scottish independence in October, but added that she could not yet say what its content would be.

Meanwhile, one of Britain's leading election experts said Tuesday that Sturgeon is unlikely to call a second referendum on Scottish independence in the next five years.

Political scientist Professor John Curtice from the University of Strathclyde in Scotland said the uncertainty surrounding Brexit and how to manage it would remain the Scottish Government's priority, with another constitutional vote being "kicked into the long grass".

A majority of people in Scotland voted in the 2016 national referendum to remain a member of the EU, but as the all-Britain vote was 52-48 in favour of leaving, May has insisted she will carry out the will of the majority and end Britain's EU membership.

Sturgeon said ahead of her meeting with May that the prime minister must secure a withdrawal agreement that provides for an orderly transition, or face the catastrophic prospect of Britain crashing out of the EU without a deal.

"A no-deal Brexit would be utterly unacceptable and deeply damaging but, by talking it up as a negotiating tactic, there is a very real danger it becomes a reality," said Sturgeon.

In an editorial comment Tuesday, one of Scotland's leading newspapers, the Scotsman, said: "It would be much more sensible to accept that time has run out to achieve a bespoke deal that satisfies the UK and EU. Brexit could then either be delayed until a breakthrough can be achieved or it could take place as planned with the UK staying inside the Single Market and Customs Union. As The Scotsman has said before, this would still allow Britain to move further away from the EU at a later date -- if it wanted to do so."

During the visit, May and Sturgeon formerly signed a deal that will pave the way for hundreds of millions of dollars of investment to create jobs and economic growth in Edinburgh and southeast Scotland.

The British and Scottish governments have each committed nearly 400 million U.S. dollars to a City Deal which will see over 1.3 billion dollars of investment to unlock economic growth.

Funding will go directly to scientific research on space, health sciences, agri-tech and food and drink at Heriot-Watt, Queen Margaret and Edinburgh Universities in Scotland.

The signing of the deal will see the creation of five new innovation hubs, including in robotics and space technologies.

May also announced a further 17 million dollars for investment in six science centers in Britain, including Dundee and Glasgow, to drive innovation in science and technology.