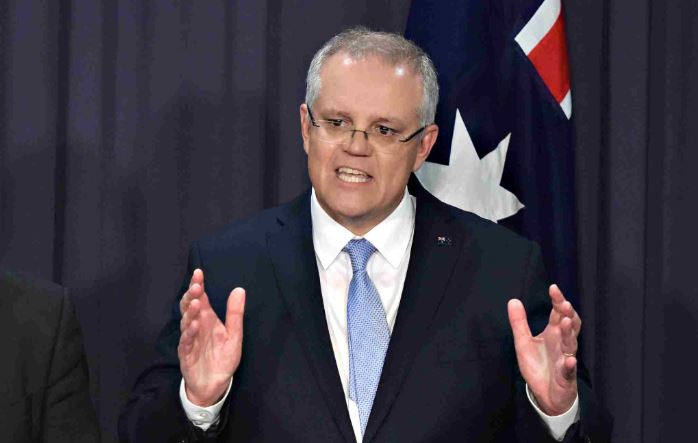 Scott Morrison was sworn in as Australia's seventh prime minister in 11 years Friday after a stunning party revolt against then-PM Malcolm Turnbull, which the new leader admitted had left the government "bruised and battered".

Former home affairs minister Peter Dutton, an ex-police officer and right-winger, was the driving force behind the move to oust Turnbull after a Liberal Party backlash against his more moderate policies.

But after a torrid week of political maneuvering in Canberra it was Morrison, a Turnbull ally who served as treasurer, who won a party vote 45-40. He was officially sworn in as Australia's 30th prime minister late Friday in a ceremony in the capital.

The fresh outbreak of political instability was met with renewed public disgust towards the political class -- already among the least trusted profession in the country despite an unprecedented era of prosperity.

Morrison admitted the extraordinary scenes in the nation's capital had taken a heavy toll on parliament and the Liberal Party.

He said his top priority was to help farmers in New South Wales who are struggling through one of the worst droughts in the country's history.

"This is our most urgent and pressing need right now," Morrison said.

Dutton, who Turnbull accused of bullying and intimidation in the move to oust him, pledged "absolute loyalty" to Morrison.

Turnbull, who vowed to quit parliament after his near three-year reign came to an end, survived one attempt to oust him on Tuesday, but ministers then began defecting, throwing the government into crisis.

His departure from politics will spark a by-election for his Sydney seat, threatening the government's wafer-thin one-seat parliamentary majority.

He used his final press conference to lash out at the "wreckers" in his party.

"There was a determined insurgency from a number of people both in the party room and backed by voices, powerful voices, in the media," he told reporters, in reference to media mogul Rupert Murdoch's conservative News Corporation.

"It was described as madness by many, and... in so far as there has been chaos this week, it has been created by the wreckers."

He became a member of the House of Representatives in 2007 and represented the Division of Cook in New South Wales for the Liberal Party.

After the party was elected to lead the government in 2013, he was appointed to the cabinet as the Minister for Immigration and Border Protection.

In 2014, he was appointed the Minister for Social Services after a cabinet reshuffle. When Malcolm Turnbull replaced Tony Abbott as prime minister in 2015, Morrison was made Treasurer. He is also now the acting Minister for Home Affairs.

It is also helpful to region stability and even the world peace and prosperity. China would like to work with Australia's new government leaders, and push the China-Australia relations to develop in a correct way, added Lu.