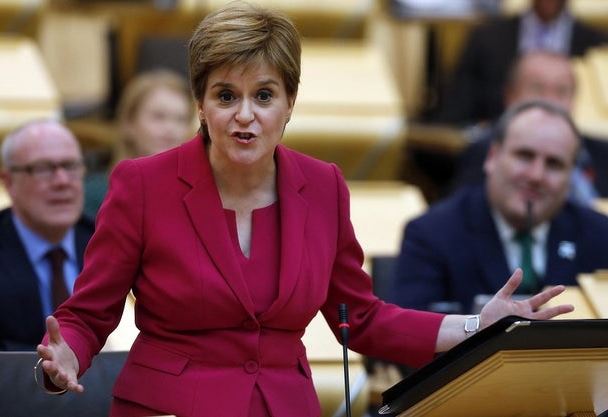 In a keynote speech in the Scottish capital Edinburgh, Sturgeon, leader of the Scottish National Party (SNP), repeated her call for a new independence referendum in 2020.

"As of 11 p.m. (2300GMT) tonight, the UK that Scotland voted to remain part of in 2014, a UK inside the EU, will no longer be a reality. The status quo that a majority voted for will no longer exist. There will be a material change in the circumstances that prevailed in 2014," said Sturgeon.

British Prime Minister Boris Johnson has resisted demands from Scotland for a second referendum, saying it had been agreed that the 2014 referendum was a "once in a generation" event. In the 2014 poll, majority of the Scottish voted in favor of remaining part of Britain.

The SNP is hoping that if the party strengthens its grip at Holyrood, it will weaken Westminster's resistance to allowing a new referendum.

Brexit "will be a moment of real and profound sadness for many of us across the UK. And here in Scotland, given that it is happening against the will of the vast majority of us, that sadness will be tinged with anger," said Sturgeon.

In the 2016 EU referendum, people in Scotland voted by 62 percent to 38 percent in favour of sticking with the bloc. Across Britain as a whole, the vote was 52-48 in support of leaving.

"To achieve independence, a referendum, whenever it happens -- whether it is this year as I want, or after the next Scottish election -- must be legal and legitimate. That is a simple fact. It must demonstrate that there is majority support for independence. And its legality must be beyond doubt. Otherwise the outcome, even if successful, would not be recognised by other countries," Sturgeon said.

"The best way to achieve that, even though it may not be ideal, is to reach agreement on a transfer of power to the Scottish Parliament, just as we did for 2014," she said.