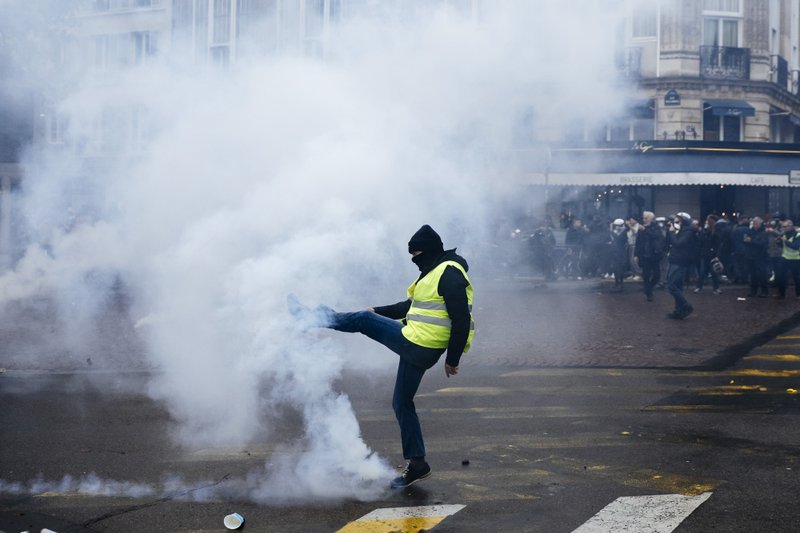 A protestor kicks away a tear gas canister during a yellow vest demonstration marking the first anniversary in Paris, Saturday, Nov. 16, 2019. (Photo: AP)

Scuffles between Paris police and activists on Saturday marred the anniversary of the birth of the yellow vest movement against government policies seen as favoring the rich.

On a day of largely peaceful demonstrations across France, there were a few violent incidents in the capital that ended up with police firing off tear gas and water cannon.

Paris police chief Didier Lallement denounced “people who came not to defend a cause but to destruct things” and deplored “attacks against security forces but also against firefighters.”

Police used tear gas as protesters tried to smash windows and enter into a shopping mall. Some were seen throwing stones at officers and setting fire to several vehicles, street trash cans and other urban equipment on Place d’Italie, in the southeast of the capital.

Earlier, the windows of a bank and several bus shelters in the area had been broken, leading to several police charges.

Police have managed to dislodge protesters trying to block the bypass around Paris in the morning and were progressively evacuating Place d’Italie during the afternoon.

Lallement noted that most protesters marched in a “quite serene” atmosphere in another demonstration from northwestern Paris to Bastille plaza, in the east of the capital.

Police had detained 105 people by late afternoon and 71 people have been fined for protesting in a forbidden area. All demonstrations were banned in a large perimeter including the Champs-Elysees, the presidential palace and both houses of parliament.

Protests were taking place around the country at traffic circles where the grassroots movement first took root in November 2018 in protest at plans to raise fuel taxes. For weeks, the protesters brought large parts of the country to a standstill.

No major incident was reported outside Paris on Saturday afternoon.

The outpouring of anger at perceived social and economic injustice eventually prompted President Emmanuel Macron to reverse some of his tax plans and to offer 10 billion euros ($11 billion) in measures to address protesters’ concerns.

Some protesters in Paris wore the high-visibility vests drivers are required to carry in their cars that gave the movement its name. Other demonstrators wore all black, their faces protected with gas masks.

Waving French flags, blowing whistles, and beating drums, some demonstrators marched in northwestern Paris streets, singing their trademark song: “We are here, we are here. Even if Macron doesn’t want it, we are here.”

Dozens of police in riot gear guarded the Arc de Triomphe overlooking the Champs-Elysees, which was the scene of weekly rioting and police crackdowns at the height of last year’s protests.

Corentin Pihel, 28, said he traveled to Paris from Montpellier to mark the movement’s anniversary. He joined the yellow vest movement two weeks after it began, identifying with its mission as a struggling student at the time.

“In the beginning, I found that the movement made a lot of sense, to mobilize from the bottom for better buying power,” Pihel said. “But after, it enlarged its communication to become much greater — it’s just people who want to live. And I felt a real solidarity.”

Cathy Nauleau, 44, came to Paris from eastern France to participate as “we’re still exactly in the same place but we won’t give up.”

The French government has also pledged to cut taxes for households next year by 9 billion euros ($9.8 billion), a spending boost that has its roots in the yellow vest movement.

Rosa Drissi, who joined the movement on its first day, said she struggles to make ends meet with just 800 euros per month. She said she’s protesting “for my retirement, and for my buying power.”

Drissi said the movement has evolved since the start.

Now, they’ve honed their protest tactics, she said. “We want to be heard. We want money — but just what we need.”

Natasha Weens said she joined the movement in January to push for “a democratic regime.”

Some protesters in other countries subsequently adopted the yellow vests as a symbol of anti-government anger.