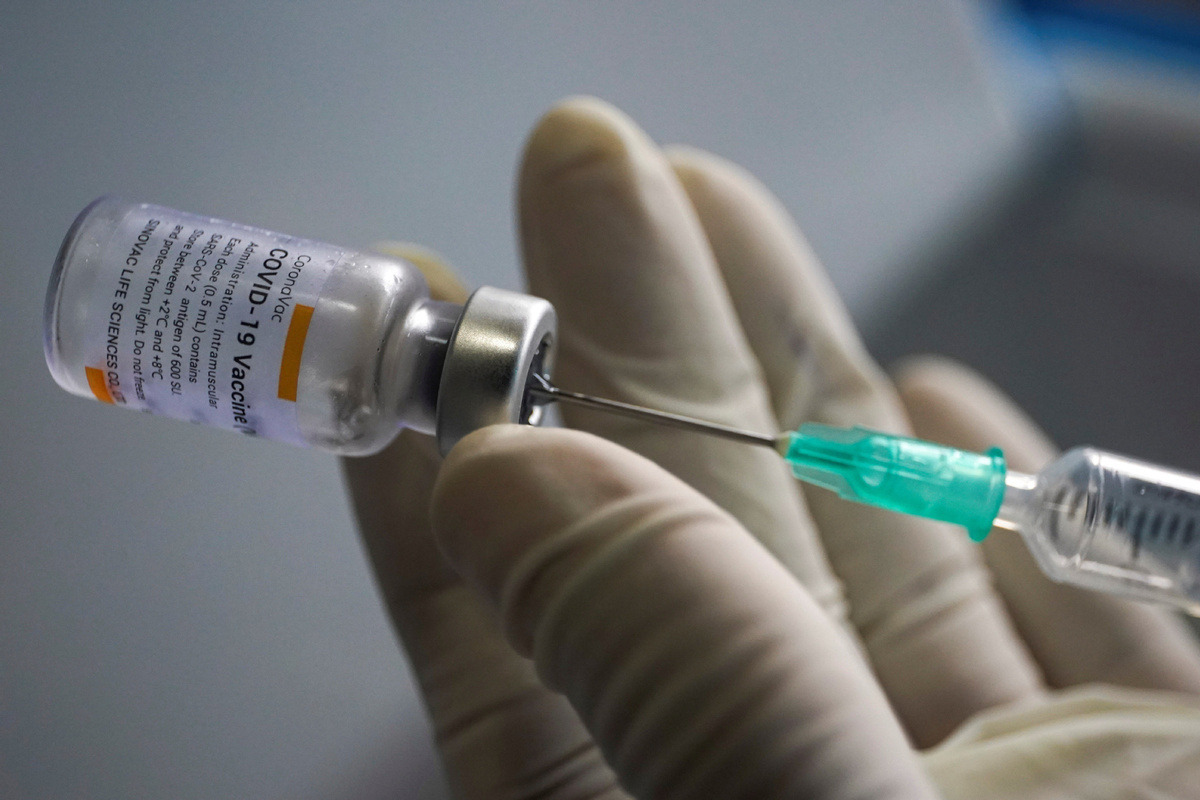 A health worker holds a syringe and a vial of the Sinovac coronavirus disease (COVID-19) vaccine at a market in Bangkok, Thailand, March 17, 2021. (Photo: Agencies)

Countries in Southeast Asia are looking to so-called vaccine passports to welcome back international travelers safely, with hopes for a revived tourism industry buoyed by the increasing pace of vaccinations across the region.

Thailand's Ministry of Tourism and Sports announced that it will shorten the country's quarantine period from 14 to 7 days for tourists vaccinated against COVID-19, under a plan scheduled to be ready on April 1. Local media said Thailand also aims to open its borders to the world with quarantine-free entry later this year.

Vietnamese Prime Minister Nguyen Xuan Phuc on Wednesday asked ministries to map out plans for a vaccine passport, according to news portal VnExpress. Singapore and Australia are expected to discuss the possibility of establishing a travel bubble for vaccinated travelers by mid-2021.

"The adoption of health certificates or vaccine passports will be very important for the recovery of tourism in the region and beyond," said Alexander Trupp, associate professor at the School of Hospitality at Sunway University in Malaysia.

However, he said such a program must be accompanied by other health and safety measures.

"But governments can't wait for that," said Childs, co-founder and chief executive officer of MyTravel-Research.com, a research and marketing firm.

Childs said that even though surveys have shown that about 30 percent of people in Australia would like to visit Southeast Asia once borders are open, this may also increase the risk of possible virus transmission.

The World Health Organization has said that health passes tied to vaccinations may increase inequality until everyone has an opportunity to get vaccinated.

But the European Union is considering its own vaccine certificate for trips within the bloc.

Noting the impact of the pandemic on tourism-dependent economies in Southeast Asia, Childs said it is inevitable that regional countries will introduce vaccine passports, whether or not the conditions are ideal.

"Tourism is so critical to many of the economies in Southeast Asia," said Childs.

Tourism accounts for more than 15 percent of Thailand's economy. As the number of its foreign visitors fell over 80 percent to 6.7 million last year, Southeast Asia's second-largest economy contracted 6.1 percent year-on-year in 2020－its sharpest decline since 1998.

Thailand has ordered vaccines from AstraZeneca and China to cover about half its population this year and has so far managed to inoculate around 50,000 people, according to The Associated Press.

"We know that the vaccines are very good in preventing the disease, but whether or not the vaccine will prevent the spreading (of COVID-19) is still a question," said Maurizio Trevisan, dean of the College of Health Sciences at VinUniversity in Hanoi.

But with many studies taking place, Trevisan said people will soon have a better sense of the probabilities of a vaccinated person spreading the virus.

In early March, China launched a digital mini program that enables subscribers to obtain a Chinese version of an international travel health certificate.

Trevisan said countries, including China and those in Southeast Asia, can work together to promote mutual recognition of vaccine passports.

Childs said the vaccine passport concept is expected to gain public acceptance in places that have low transmission rates, such as Singapore and Vietnam.

To restart international travel, Childs said that a better approach could be the idea of developing a low-risk profile, of which a vaccine passport makes up just one part.

Childs said there will be much to learn from China, and regarding vaccine passports, Southeast Asian countries will have to negotiate with China－the world's biggest market in outbound tourism.

Trupp said the vaccine passport or digital health certificate should "serve as an assurance that a person has recovered from COVID-19 or has been vaccinated against it".But health and safety procedures should be maintained.