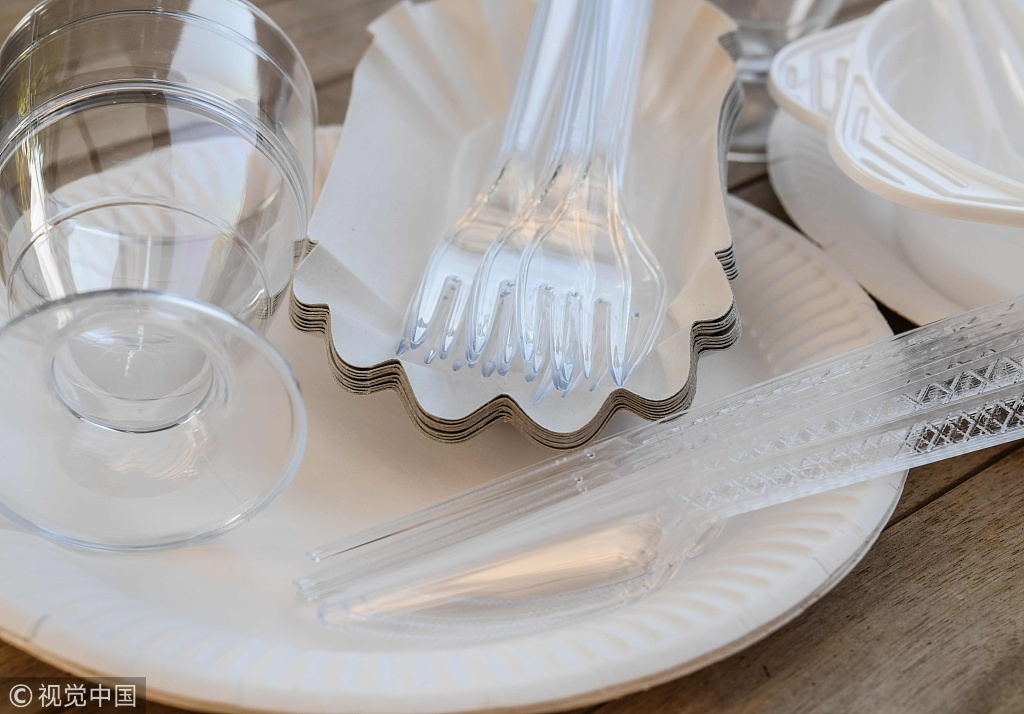 A picture taken on May 24, 2018 in Sieversdorf, eastern Germany shows plastic cutlery on a table. (Photo: VCG)

Southeast Asian countries are having difficulties dealing with huge quantities of imported waste, and ecological observers are pointing to addressing plastics pollution at the source.

China introduced a "foreign waste ban" in 2017 and in June 2018, it decided to stop all imports of solid waste by the end of 2020. Last year, the country restricted imports of 24 types of mining slag, household plastics, unsorted paper and textile waste.

The move after decades of being the receptacle for much of the world's waste will help China improve domestic environmental conditions. It will also push developed economies to confront waste and recycling－an issue that many countries have long ignored by simply exporting the problem overseas.

Since China's restrictions started taking effect, multiple countries such as the United States are looking for new places to send trash. This has led to a spike in waste imports in Southeast Asia.

In Thailand, shipments of plastics from the US multiplied 20 times in the first half of 2018 from a year earlier, according to Green-peace Unearthed, an investigative journalism project.

These countries are finding it hard to cope with imported wastes as well. "Malaysia doesn't have the systems in place to deal with this volume of waste, and our Greenpeace research shows that much of it, rather than being recycled, is just being left out in the open to rot, landfilled or possibly incinerated," Wong said.

Local communities have seen more illegal burning as well as increased air and water pollution as a result.

"Every country should uphold the 'polluter pays principle' (also known as PPP) and producer responsibility. China is upholding the PPP principle when it stops accepting other countries' waste," she said.

"The true cost (of importing waste) should factor in the hidden environment, social and health damages," said Ng. These damages include contamination and health risks.

Chang Yuan, a plastics campaigner for environmental group Greenpeace East Asia, said that addressing the waste crisis is of critical importance, "not just for China but worldwide", citing contributions by continuous public scrutiny, media attention and input from civil society.

Shirley Lui, manager for the environmental, social and governance (or ESG) reporting service at advisory firm Ascent Partners, said "countries should always take care of their own trash".

"It's unsettling to see how well-known cities like Hong Kong or countries like the Maldives just relegate a lot of it to landfill, without many policies in place for reducing, recycling or reusing," Lui said.

That gap extends to the ESG front. To date, there is limited information on the complete cycle of waste management.

"For ESG, a lot of small-to-medium companies only mention that they give their trash to building management or municipal services to handle. I would like to see more client awareness on trash handling after collection for recycling or disposal," said Lui.

Chang urged industries and corporations that manufacture and market waste to step up responsibility.

"It is critical that plastics pollution is addressed at the source, by eliminating plastics in the design phase and leaving our reliance on throwaway plastics behind," he said.