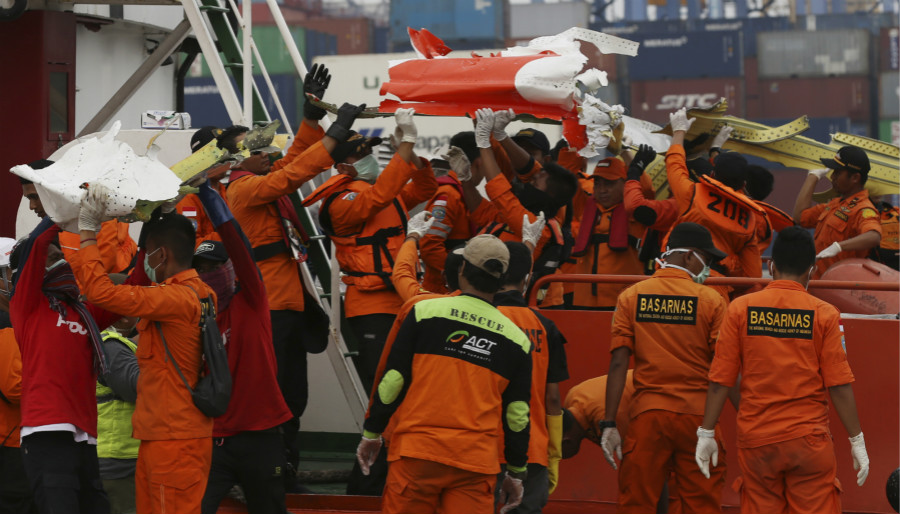 Recovery teams unload pieces of wreckage from the Lion Air jet that crashed into Java Sea at Tanjung Priok Port in Jakarta, Indonesia, Saturday, Nov. 3, 2018. New details about the crashed aircraft previous flight have cast more doubt on the Indonesian airline's claim to have fixed technical problems as hundreds of personnel searched the sea a fifth day Friday for victims and the plane's fuselage. (Photo: AP)

A search operation for Lion Air plane that went down in waters off western Indonesia six days ago was prolonged for three days as some major items of the aircraft have not been recovered yet, a senior rescuer disclosed on Sunday.

Under a procedure the search mission should end at the seventh day, on Sunday, but it can be extended, spokesman of national search and rescue office Sinaga said.

"Today (Sunday) the search mission is prolonged for three days," he told Xinhua over phone.

The cockpit voice recorder, the frame of the fuselage and the body parts of the almost new Boeing 737 Max 8 air craft are the major target of the search mission involving more than 859 personnel, Sinaga cited.

After the extension a meeting involving all the stakeholders would decide whether to keep the search or end it, he added.

By far, the spokesman said, at least 105 body bags containing body parts of the passengers have been handed to the disaster victim identification unit of the national police hospital in Jakarta.

Lion air plane with flight number JT 6-10 that crashed into water of Tanjung Pakis of Karawang district of West Java province on Monday, killing all the 189 people on board.

Search operation in Tanjung Pakis water focuses on the seafloor site under Victory ship which dragged anchors at about 500 meters from the coordinate where the aircraft last communicated with the air traffic controller, according to the office.