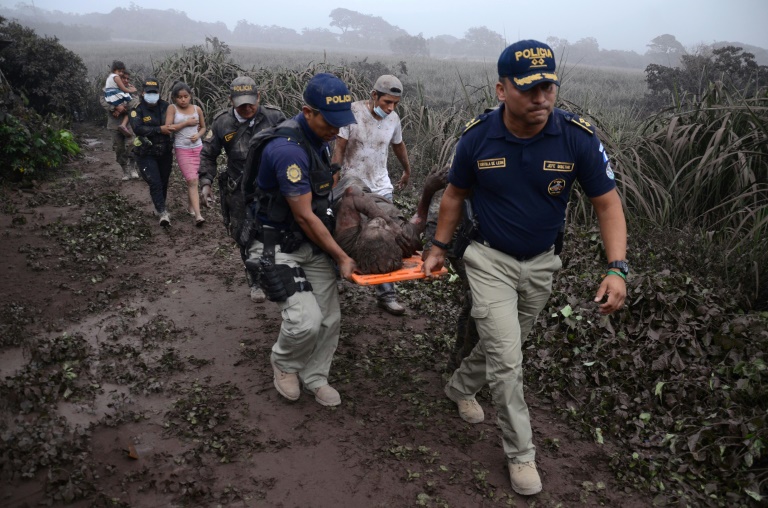 Emergency workers will resume the search on Monday for Guatemalans missing after the eruption of the Fuego volcano, which belched out clouds of ash and flows of lava and left at least 25 people dead.

The volcano expelled hot muddy material that caused the deaths -- including of several children -- in communities located on its southern slope, disaster agency spokesman David de Leon said in a WhatsApp group.

Search and rescue operations were suspended due to low light and dangerous conditions, but were to resume early on Monday morning, he said.

The Institute of Volcanology said the eruption ended after over 16 hours of activity, but warned that it could resume again and recommended precautionary measures be maintained.

The eruption of the 3,763-meter (12,346-foot) volcano sent ash billowing over the surrounding area, turning plants and trees gray and blanketing streets, cars and people.

Farmers covered in ash fled for their lives as civil defense workers tried to relocate them to shelters during the event.

"This time we were saved; in another (eruption) no," said Efrain Gonzalez, 52, sitting on the floor of a shelter in the city of Escuintla, where he arrived with his wife and one-year-old daughter after fleeing the hard-hit El Rodeo community.

Gonzalez was overwhelmed with despair, as two more of his children, aged 10 and four, are missing. They were trapped in their home, which was flooded with hot mud that descended from the volcano.

National Coordinator for Disaster Reduction (Conred) chief Sergio Cabanas did not rule out the number of dead increasing, as there are "missing persons, but we do not know how many."

President Jimmy Morales and his government declared three days of mourning and a state of emergency for Escuintla, Chimaltenango and Sacatepequez, which must still be ratified by Congress.

Hundreds of personnel from the police, Red Cross and military have been dispatched to support emergency operations, Morales said.

Cabanas said that the dead included a civil protection official.

Some 3,000 people were evacuated due to the eruption, which affected rural communities around the volcano as well as Antigua Guatemala, a colonial-era town very popular with tourists in the Central American country, he said.

People were working to clean ash off the runways to get the airport operating again.

The eruption is the second major one this year from the peak, following another that subsided at the beginning of February after sending ash towering 1.7 kilometers into the sky.

A September 2012 eruption of the volcano saw 10,000 people evacuated, while another in February 2015 forced the closure of the capital's main airport.

Apart from the Fuego volcano, there are two other active volcanos in Guatemala. One of them, Pacaya, is just 20 kilometers from Guatemala City.