WORLD Search on for over 100 missing after California wildfires

Search on for over 100 missing after California wildfires

Firefighters backed by air tankers and helicopters battled California's raging wildfires for a seventh day on Wednesday as the authorities in the worst-hit county released a list of over 100 missing people. 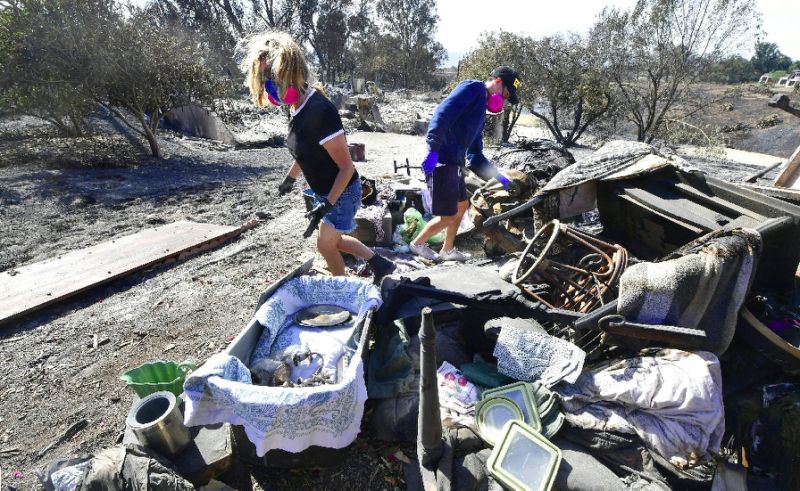 Katherine Marinara and her son Luca sift through the remains of their home in Malibu, California (Photos: AFP)

Most of those unaccounted for are from the Butte County town of Paradise, which was virtually erased from the map by the so-called "Camp Fire" blaze.

Paradise, a town of around 26,000 in the foothills of the Sierra Nevada mountains, was popular with retirees and many of those reported missing by the sheriff's office are elderly -- in their 70s, 80s and 90s.

Virtually every home in Paradise, located 80 miles (130 kilometers) north of the state capital Sacramento, was destroyed by the fast-moving fire fueled by high winds.

At least 51 deaths have been reported so far from the deadliest wildfires in California's recent history and body recovery teams were going house-to-house with cadaver dogs in Paradise on Wednesday.

"We are in the midst of a catastrophe," Governor Jerry Brown told a press conference. "The fire was unprecedented, overwhelming, so a lot of people got caught."

Brock Long, head of the Federal Emergency Management Agency (FEMA), said Paradise was looking at a "total rebuild" with so many homes, businesses and infrastructure destroyed.

"This is going to be a very long and frustrating event for the citizens of Paradise," Long said. "We're going to have to find a new normal."

"You're not going to be able to rebuild Paradise the way it was."

An AFP reporter in Paradise on Wednesday saw crews removing trees, repairing fences along roads and towing away cars. A policeman said he did not know when residents would be allowed back in. 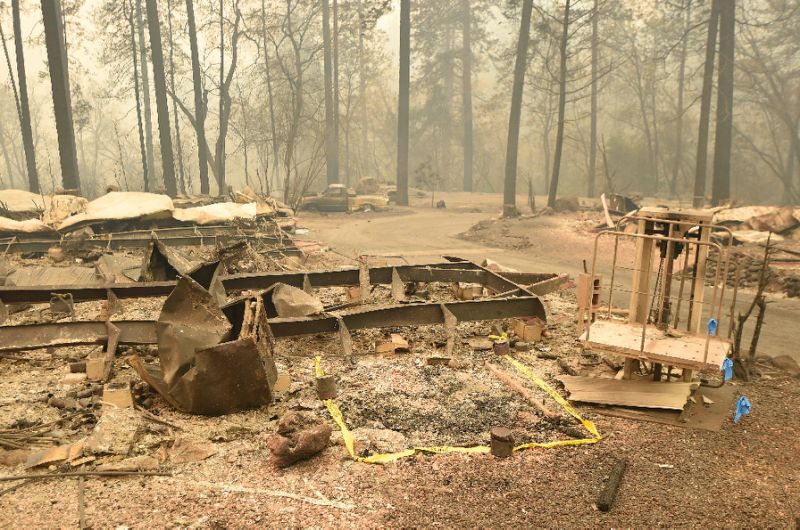 The area where a body was found is marked by tape in Paradise, California

Forty-eight deaths have been reported from the "Camp Fire," mostly in Paradise, while three people have died in the "Woolsey Fire."

While the cause of the "Camp Fire" is still under investigation, a lawsuit has been filed against the local power company, PG&E, by fire victims claiming negligence by the utility.

The complaint alleged that the fire began on November 8 when a high voltage transmission line failed, igniting a vegetation fire.

As thousands of firefighters fought the "Camp Fire" in northern California and thousands more battled the "Woolsey Fire" north of Los Angeles, incredible tales have emerged of courage and survival.

A family of four submerged themselves in a chilly mountain reservoir with several of their neighbors to escape the flames.

An unknown man is being credited with saving lives by using a bulldozer to clear clogged roads of burning cars and allow people to escape to safety.

A man who asked to be identified by only his first name, Scott, told the San Francisco Chronicle that when the "Camp Fire" surrounded his home in Concow in Butte County he and his family plunged into a reservoir along with a 90-year-old neighbor, Bruno.

They remained in the cold water as flames licked the shore and made their way to a small island in the reservoir after finding a pair of rowboats.

Scott told the Chronicle it was so cold in the water that he waded back towards the fire on the shore at several points to warm up.

After one of Scott's sons went looking for help, Scott's family and Bruno -- who was suffering from hypothermia -- were taken in by another family whose house had escaped unscathed. 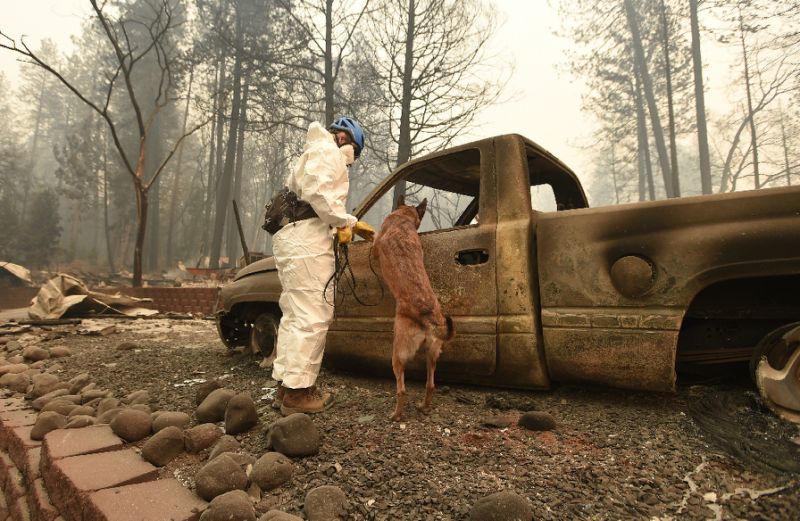 A cadaver dog looks inside a burned-out vehicle in Paradise, California

Allyn Pierce, a nurse in Paradise, told The New York Times and CNN how his life was saved by a bulldozer driver as he fled the town in his pickup truck along with other residents on Thursday.

Pierce said cars were catching fire around him and he dictated a goodbye message to his family, expecting his vehicle to catch fire next.

"I stayed calm but I was terrified," Pierce said.

"Then all of a sudden this bulldozer comes out of nowhere and knocks this burning truck out of the way," he said.

Instead of fleeing to safety, however, Pierce turned around and went back to the Adventist Health Feather River Hospital, where he works as an intensive care nurse, and helped evacuate patients to the hospital's helipad.

Pierce displayed pictures of his Toyota pickup truck which he said was still working despite lights which had melted and a rear passenger door which had been welded shut by the heat from the fire.

It has destroyed some 7,600 homes and 260 commercial properties. Battling the blaze are more than 5,600 fire personnel, some from as far away as Washington state and Texas.

Cover image: Katherine Marinara and her son Luca sift through the remains of their home in Malibu, California