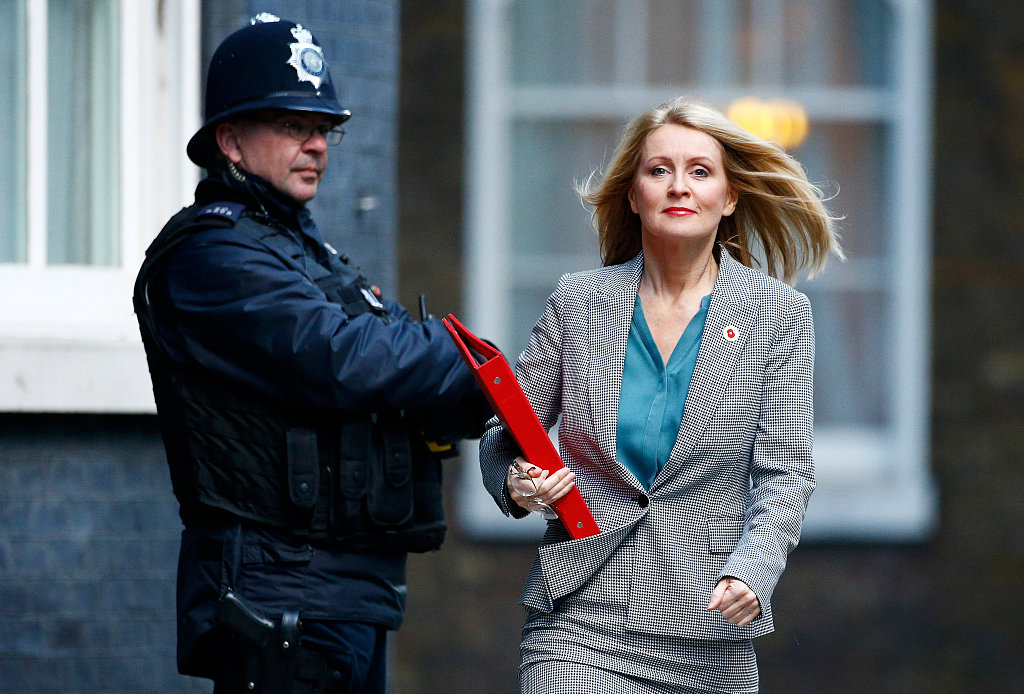 LONDON, Nov. 15 (Xinhua) -- British Work and Pensions Secretary Esther McVey on Thursday resigned over the draft Brexit agreement, becoming the second cabinet member to step down hours before British Prime Minster Theresa May is to speak to the parliament to sell the new divorce deal.

McVey said the European Union (EU) withdrawal deal, which was reached Tuesday by Britain and the EU, "did not honour the result of the referendum."

"This is a matter of trust," she said in her resignation letter to the prime minister, which she tweeted. "It is about the future of our country and the integrity of our democracy."

"I cannot defend this, I cannot vote for this deal," she said. "I could not look my constituents in the eye were I to do that. I therefore have no alternative but to resign from the government."

The latest development came after the resignation of Brexit Secretary Dominic Raab, who said that he "cannot in good conscience support" the draft Brexit agreement between London and Brussels.

"No democratic nation has ever signed up to be bound by such an extensive regime," Raab said.

McVey was the British work and pensions secretary since this January.

She was elected member of the parliament in 2017 and had always openly refused to back the prime minister's Brexit Chequers plan, which was hammered out in July as a basis for negotiations with the EU.

Vara, who backed to remain in EU in the 2016 referendum, said he feared the UK would stay in limbo for years while a permanent deal with the EU was negotiated.

Hard Brexiters reacted negatively to the proposed deal, indicating that they intended to vote against it if it comes to the parliament.

The draft divorce deal represented a technical breakthrough after months of tense negotiations between the Britain and the EU on how Britain can leave the regional bloc on March 29 next year.

According to the draft agreement of more than 500 pages, Britain will remain in a customs union and commit to a "level playing field" on EU rules in areas like environmental and workplace protections during a backstop period after Brexit.

On Wednesday, the prime minister, after a five-hour cabinet meeting on the draft deal, cleared the first hurdle when cabinet ministers finally approved the draft terms of her EU withdrawal agreement, which needs to be ratified by the British parliament and the remaining 27 EU countries.

At present, she is facing a battle to get it through parliament as Brexiteer Conservative member of the parliaments, as well as some Remainers, condemned the plan, accusing her of breaking promises and handing control back to Brussels.

"The draft agreement is the best that could be negotiated," May said after the cabinet meeting on Wednesday. "The deal enables us to take back control."