Two late-stage Covid-19 medical trials have been paused in the space of 24 hours over potential safety concerns, the latest setbacks to scientists in the long fight against the pandemic. 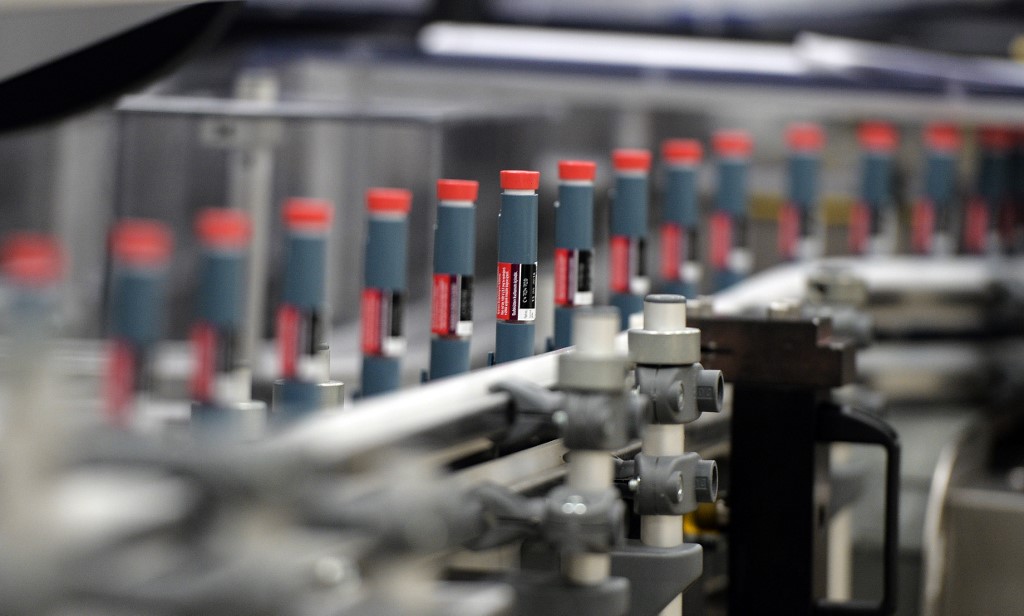 This picture shows an unit dedicated to the production of insulin pens at the factory of the US pharmaceutical company Eli Lilly in Fegersheim, eastern France, on October 12, 2015. (Photo: AFP)

US pharmaceutical firm Eli Lilly on Tuesday suspended its Phase 3 trial of its lab-produced antibody treatment in hospitalized patients over an unspecified incident.

A day earlier, the American pharmaceutical giant Johnson & Johnson temporarily halted its Phase 3 Covid-19 vaccine trial due to an unexplained illness in a study participant.

J&J's research head Mathai Mammen told investors Tuesday it was a "temporary pause" that could be unrelated to their drug.

It's not unusual for final stage clinical trials to hit a problem -- indeed, they are designed to scale up the number of participants to thousands or tens of thousands to tease out side effects that may be very rare.

Last month, British firm AstraZeneca became the first in the world to announce a pause of its vaccine trials after one patient in Britain was diagnosed with an inflammatory condition affecting the spine.

The trial was later resumed around the world but remains suspended in the US for reasons that are unclear.

Doctor and scientist Eric Topol, who directs the Scripps Research Institute, tweeted that he was surprised to hear about the safety concern with Lilly's antibody treatment, because earlier stages didn't reveal any serious side effects.

"Hopefully a brief pause and we'll get details quickly. Good to be cautious," he said.

"Lilly is supportive of the decision by the independent DSMB (data safety monitoring board) to cautiously ensure the safety of the patients participating in this study," a spokesperson told AFP in a statement Tuesday.

The study began in August across more than 50 sites in the United States, Denmark and Singapore with the aim of recruiting 10,000 people.

Lab-produced antibody treatments have been making headlines recently after US President Donald Trump credited one therapy, developed by biotech firm Regeneron, with curing him of Covid-19.

Both Lilly and Regeneron last week applied to the US Food and Drug Administration for emergency use authorizations for their treatments.

Monoclonal antibodies are a relatively new class of drugs that are best known for treating certain types of cancer and autoimmune disease.

Human immune systems produce antibodies, which are infection-fighting proteins, and vaccines teach our bodies to be prepared to make the right ones for particular pathogens.

The Covid-19 treatment studied in the paused trial was based on an effective antibody Lilly found in a recovered patient.

The host immune cells that produce the antibodies can be cultured in a lab to produce the desired proteins en masse.

Lilly didn't disclose any details about the safety concern or how many people are affected.

But generally speaking, mild side effects of intravenously administered therapies can include fevers, chills and fatigue, while moderate to severe infusions can cause chest pain and shortness of breath.

J&J, meanwhile, moved to buoy confidence in its vaccine.

"It's not at all unusual for unexpected illnesses (to occur) in large studies over their duration," Mammen said in a conference call.

"In some cases, serious adverse events... may have something or nothing to do with the drug or vaccine being investigated," he said.

The final stage of J&J's trial had started recruiting participants in late September, with a goal of enrolling volunteers across more than 200 US and international locations.

J&J is one of 11 organizations globally to begin a Phase 3 trial on a Covid-19 vaccine.

Washington has given the multinational about $1.45 billion in funding under Operation Warp Speed.

The vaccine is based on a single dose of a cold-causing adenovirus, modified so that it can no longer replicate, combined with a part of the new coronavirus called the spike protein that it uses to invade human cells.

J&J used the same technology in its Ebola vaccine, which received marketing approval from the European Commission in July.

At close of trading, J&J was down 2.3 percent while Lilly was down 2.9 percent.