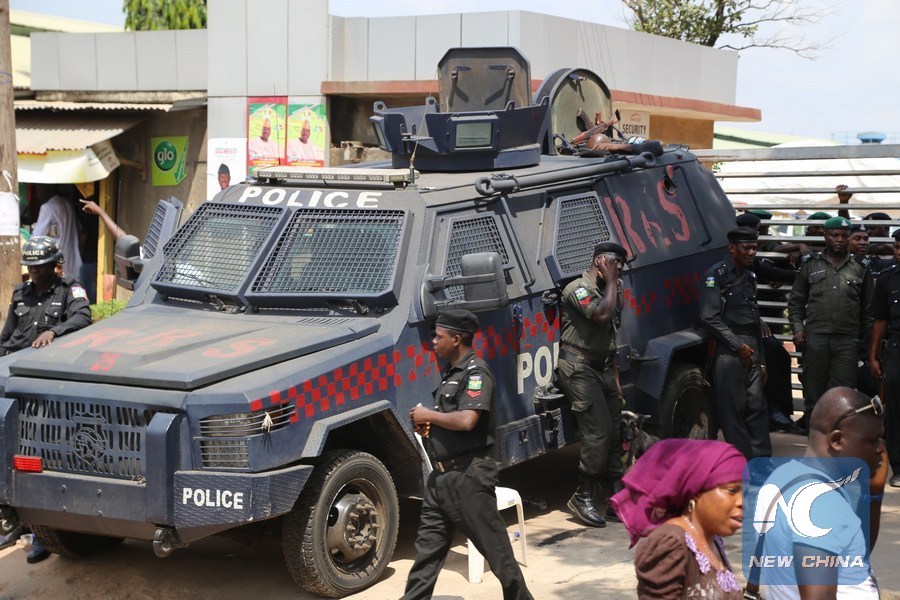 ABUJA, Aug. 7 (Xinhua) -- A sudden invasion of the Nigerian parliament in the capital Abuja by security operatives ended Tuesday afternoon after raising political tension across the West African country.

The masked security operatives were seen driving away in black vans at about 2:50 p.m. As early as 7 a.m., they took over the national parliament and blocked access to the building.

National lawmakers, journalists and staff of the national parliament were denied access to the parliament by the security operatives who claimed to be acting on "an order from above."

The security operatives, mainly from the self-styled Department of State Services (DSS), later allowed only identified lawmakers into the parliament premises.

The development had caused palpable tension in the country as most citizens suspected a political undertone to the act.

The unauthorized takeover of the parliament by security operatives was roundly condemned as "anti-democratic."

Local political analysts have called the development a "dangerous power game between the ruling party and the main opposition party."

Nigeria's acting president Yemi Osinbajo, after condemning the act, fired the director general of the State Security Service (or mostly known as DSS by Nigerians).

The termination of Lawal Musa Daura's appointment as secret police chief was announced in a statement by the Presidency in a twitter post.

Details remain not immediately known on the reason for the sacking, but the DSS operatives were withdrawn from the parliament soon after the sacking announcement.

Osinbajo had earlier summoned an emergency meeting with the duo of Daura and Ibrahim Idris, the inspector general of police, following the unauthorized takeover of the national parliament.

Osinbajo described the unauthorized takeover of the National Assembly as "a gross violation of the constitutional order, rule of law and all acceptable notions of law and order."

According to him, the unlawful act was done without the knowledge of the Presidency.

The acting president, thereafter, said those within the law enforcement apparatus who participated in the incident will be identified and subjected to appropriate disciplinary action.

As tension rose across the country over the development, the leadership of the National Assembly had to call off a meeting scheduled for Tuesday. The crucial meeting would probably have paved way for the reconvening of the Senate and House of Representatives.

Some opposition senators, who were caught in the blockade, interpreted it as a move to forcefully unseat the Senate President, Bukola Saraki, who dumped the governing party for the main opposition People's Democratic Party (PDP) last week.

The main opposition party accused the ruling All Progressives Congress of orchestrating the security invasion of the parliament as an assault on democracy.

The ruling party has denied the allegation, saying it had no hand in the unauthorized invasion of the parliament.