WORLD See you in 17 years: America's cicada plague winding down

See you in 17 years: America's cicada plague winding down 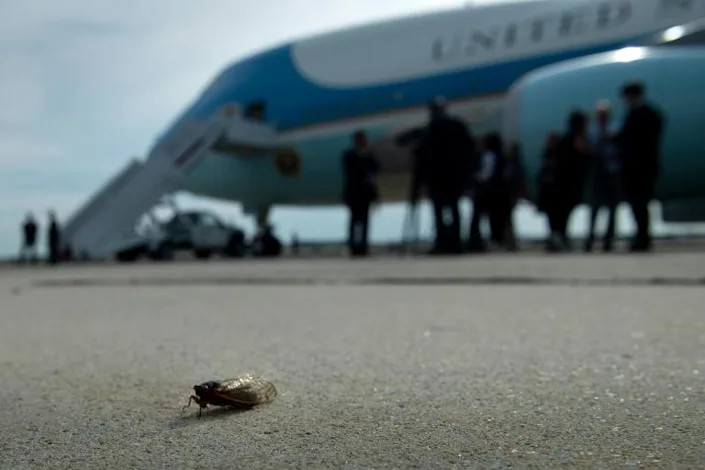 A cicada is seen on the tarmac near Air Force One at Joint Base Andrews in Maryland on June 9, 2021 as President Joe Biden prepared to leave for Europe. (File photo: AFP)

They've been everywhere, crawling up trees and flitting about clumsily in search of a mate, droning loudly, causing auto accidents and even daring to land on the neck of the US president.

Now the curtain is coming down for the latest brood of cicadas, the disquieting insects that appear briefly in their trillions in the US every 17 years. These huge swarms that have been spawning headlines -- and headaches, in some cases -- for Americans are dying off.

The infestation began in April and May in some eastern and midwest US states such as Maryland and Ohio, and the capital Washington.

For weeks these harmless thumb-sized bugs with striking red eyes and translucent wings did what cicadas are supposed to do: emerge from the ground as babies, molt, mate, lay eggs and die. 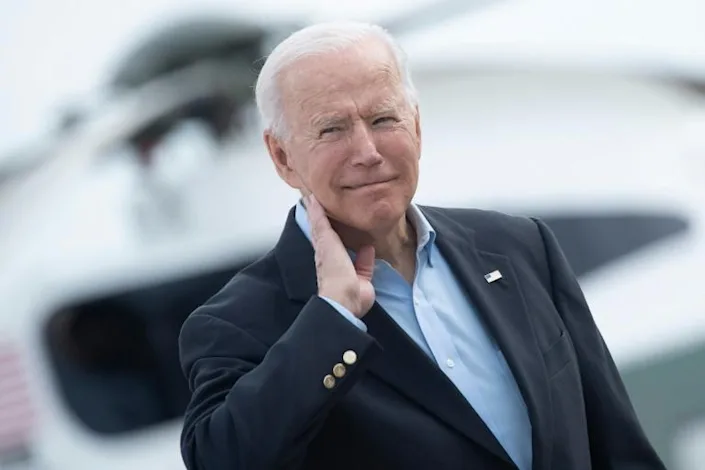 US President Joe Biden touches his neck after a cicada crawled up it on June 9, 2021. (File photo: AFP)

The "periodical" cicada waits underground as a nymph for almost its entire 17-year life cycle, making the journey to the surface when the soil reaches a perfect 64 degrees Fahrenheit (18 C).

As they always do, the Class of 2021 made a bit of a nuisance of itself. They do not fly well, constantly bumping into windows, cars and people, making an angry hissing sound as if the collision were not their fault.

The brood had its most prominent 15 minutes of fame on June 9 when President Joe Biden swatted one from his neck as he waited to board Air Force One for his first trip abroad.

"Watch out for the cicadas. I just got one — it got me," Biden said with a smile as he approached a group of reporters.

There were so many cicadas in the Washington area they would actually show up on weather radar screens.

The night before the Biden incident, a swarm of the insects clogged the engines of a press plane due to accompany the president to Europe, delaying those journalists for hours until another aircraft was found.

And while cicadas do not bite or sting people, they do cause trouble, as happened in Cincinnati, Ohio.

"Historically each time they emerge, there have been several car crashes attributed to their presence. This year is no different," Cincinnati police wrote on Facebook.

The police went on to explain that a young man happened to drive through a swarm of cicadas with his window open and one of them hit him in the face, temporarily stunning him.

"He then crashed into a utility pole," police said. The driver was not seriously injured.

"Remember to keep your windows rolled up until our little red eyed friends are gone."

Now, as the bugs die off, the drone of the cicadas has fallen silent in some regions that had been infested and the dried up, crunchy bodies of dead insects litter sidewalks.

For the rest, it is just a matter of time.

And for entomologists it is time to evaluate the latest chapter of this very rare event.

"In some places, they appear to have expanded their range, while in other places, their range has shrunk. It's going to take time to sort through the data," said John Cooley of the Department of Ecology and Evolutionary Biology of the University of Connecticut in Hartford. He launched a project to map the cicadas.

"Where trees have been removed and surfaces built, cicadas are gone for good. However, where agricultural lands have reverted to parks or residential properties and trees have been planted, there are more cicadas," said Michael Raupp of the entomology department at the University of Maryland.

As for climate change, it will affect these bugs but it is not yet clear exactly how, said Cooley.

"That's why our detailed mapping project is so important. We are making baseline maps to look at in the future," he said.

Raupp said global warming will allow cicadas to expand their range northward and emerge earlier in the year.

Another hypothesis, he said, is that some cicadas could emerge every 13 years instead of 17.