Republican Sen. David Perdue was forced into quarantine Thursday in the home stretch of Georgia's high-stakes Senate runoffs, disclosing just five days before the election that he had been exposed to a campaign worker infected with the coronavirus. 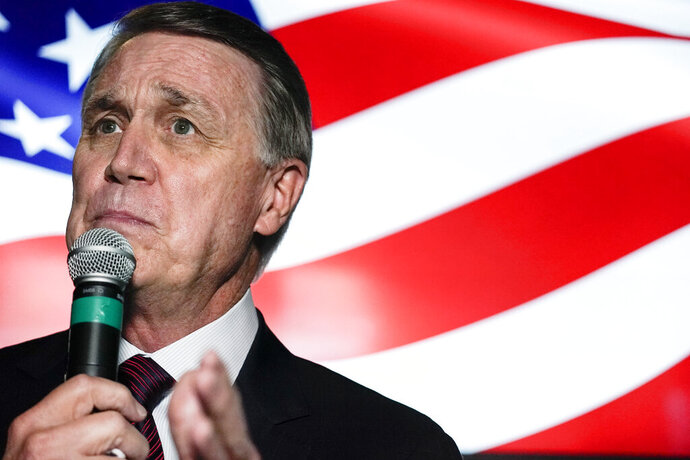 Perdue's campaign did not say how long he plans to stay in quarantine, but guidelines of the federal Centers for Disease Control say those exposed to the virus can resume normal activities after seven days if they have a negative test result.

It's bad timing for Perdue and fellow Republicans heading into critical runoffs that will determine control of the Senate. Following the CDC's guidance would keep Perdue in isolation for the remainder of the campaign, including a planned Georgia rally Monday with President Donald Trump.

"This morning, Senator Perdue was notified that he came into close contact with someone on the campaign who tested positive for COVID-19," the Perdue campaign's statement said. "Both Senator Perdue and his wife tested negative today, but following his doctor's recommendations and in accordance with CDC guidelines, they will quarantine."

The statement went on to say Perdue's campaign "will continue to follow CDC guidelines."

If both Republican incumbents lose, Democrats will control the Senate.

Perdue's campaign did not identify the worker who tested positive for the virus.

In late November, Loeffler went into self-quarantine after testing positive for COVID-19. Her campaign said she developed no symptoms, and she resumed campaigning after later tests came back negative.

Both Perdue and Loeffler have frequently worn masks on the campaign trail, but have also attended large events — including rallies with Trump and Vice President Mike Pence — where people attending crowded close together, many of them without masks.

Perdue had been scheduled to join Trump along with Loeffler on Monday for a rally to fire up turnout in heavily conservative northwest Georgia.

Democrats are also bringing their heavy hitters to the state. Vice President-elect Kamala Harris plans to campaign Sunday for Ossoff and Warnock in Savannah, followed by President-elect Joe Biden sharing a stage with the Democrats on Monday in Atlanta.

Perdue is seeking his second Senate term in a state where Democrats are gaining influence, largely because of a growing non-white population in Atlanta's suburb. In November, Biden became the first Democratic presidential candidate to win Georgia since 1992.

More than 2.8 million Georgia voters have already cast runoff ballots either by mail or during in-person early voting. That's more than half the 5 million overall votes cast statewide in the Nov. 3 election.