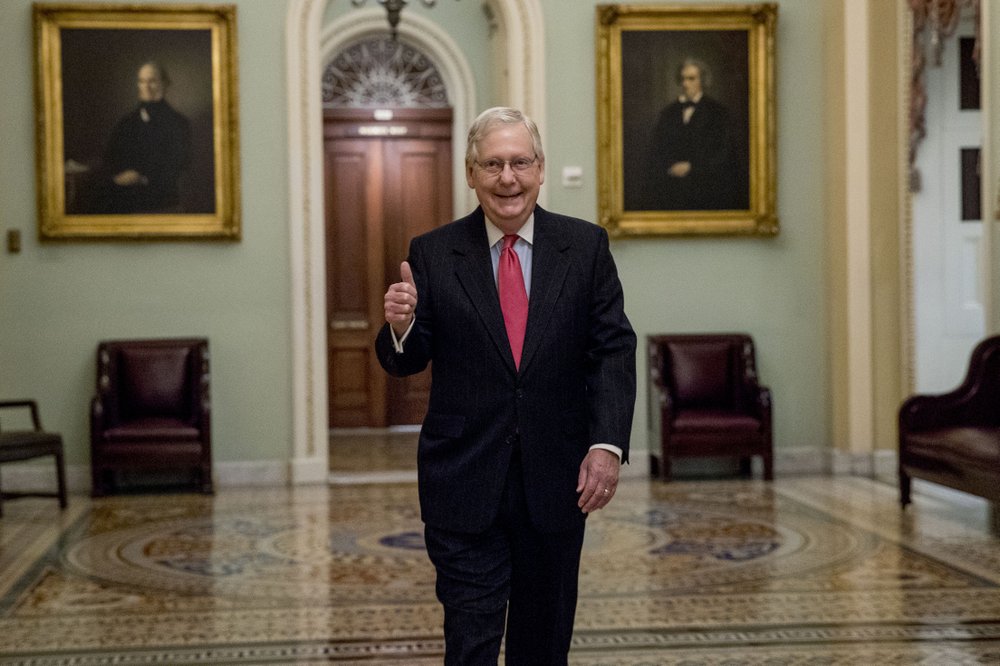 Senate Majority Leader Mitch McConnell of Kentucky gives a thumbs up as he arrives on Capitol Hill, March 25, 2020, in Washington. (Photo: AP)

The unanimous vote Wednesday came despite misgivings on both sides about whether it goes too far or not far enough and capped days of difficult negotiations as Washington confronted a national challenge unlike it has ever faced.

The 880-page measure is the largest economic relief bill in U.S. history. Majority Leader Mitch McConnell appeared somber and exhausted as he announced the vote — and he released senators from Washington until April 20, though he promised to recall them if needed.

“Pray for one another, for all of our families and for our country,” said McConnell, R-Ky.

“The legislation now before us now is historic because it is meant to match a historic crisis,” said Minority Leader Chuck Schumer, D-N.Y. “Our health care system is not prepared to care for the sick. Our workers are without work. Our businesses cannot do business. Our factories lie idle. The gears of the American economy have ground to a halt.”

The package is intended as relief for an economy spiraling into recession or worse and a nation facing a grim toll from an infection that’s killed more than 21,000 people worldwide. Treasury Secretary Steven Mnuchin, asked how long the aid would keep the economy afloat, said: “We’ve anticipated three months. Hopefully, we won’t need this for three months.” 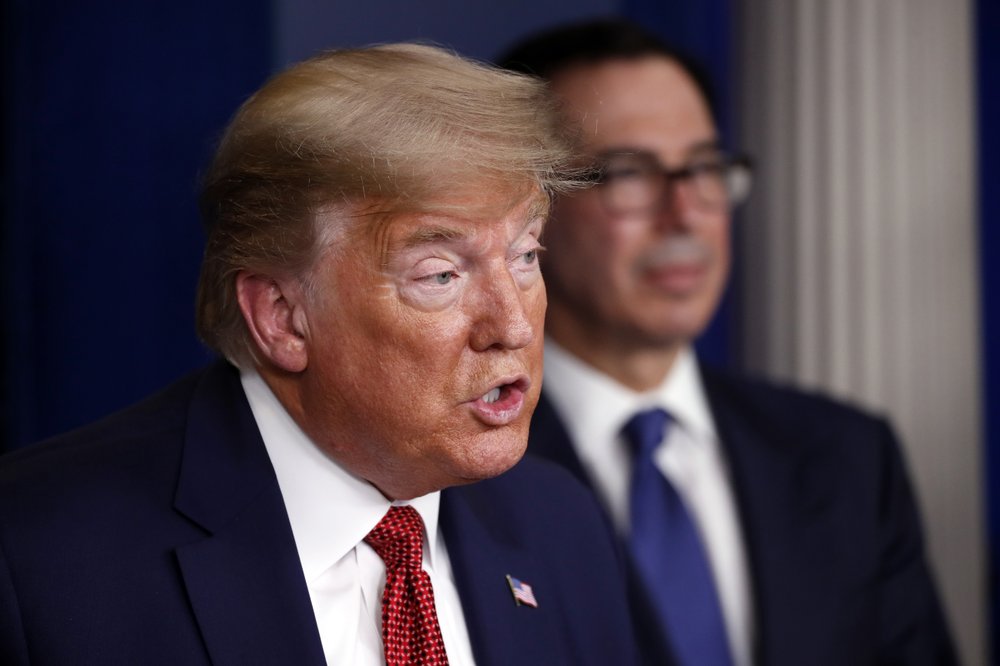 The package is intended as relief for an economy spiraling into recession or worse and a nation facing a grim toll from an infection that’s killed more than 21,000 people worldwide. Treasury Secretary Steven Mnuchin, asked how long the aid would keep the economy afloat, said: “We’ve anticipated three months. Hopefully, we won’t need this for three months.”

Underscoring the effort’s sheer magnitude, the bill finances a response with a price tag that equals half the size of the entire $4 trillion-plus annual federal budget. The $2.2 trillion estimate is the White House’s best guess.

Insistently optimistic, President Donald Trump said of the greatest public health emergency in anyone’s lifetime, “I don’t think its going to end up being such a rough patch” and anticipated the economy soaring “like a rocket ship” when it’s over.

“The government has temporarily shut down the economy because of this disease, and the government must help those who are hurt by it,” said Sen. Lamar Alexander, R-Tenn.

The drive by leaders to speed the bill through the Senate was slowed as four conservative Republican senators from states whose economies are dominated by low-wage jobs demanded changes, saying the legislation as written might give workers like store clerks incentives to stay on unemployment instead of return to their jobs since they may earn more money if they’re laid off than if they’re working. They settled for a failed vote to modify the provision.

Other objections floated in from New York Gov. Andrew Cuomo, who has become a prominent Democrat on the national scene as the country battles the pandemic. Cuomo, whose state has seen more deaths from the pandemic than any other, said, “I’m telling you, these numbers don’t work.”

Ardent liberals like Rep. Alexandria Ocasio-Cortez were restless as well, but top Washington Democrats assured them that additional coronavirus legislation will follow this spring and signaled that delaying the pending measure would be foolish.

The sprawling measure is the third coronavirus response bill produced by Congress and by far the largest. It builds on efforts focused on vaccines and emergency response, sick and family medical leave for workers and food aid.

House Speaker Nancy Pelosi, D-Calif., swung behind the bipartisan agreement, saying it “takes us a long way down the road in meeting the needs of the American people.”

Senate passage delivered the legislation to the Democratic-controlled House, which is expected to pass it Friday. House members are scattered around the country. House Majority Leader Steny Hoyer, D-Md., said the measure would pass by voice vote without lawmakers having to return to Washington.

The package would give direct payments to most Americans, expand unemployment benefits and provide a $367 billion program for small businesses to keep making payroll while workers are forced to stay home.