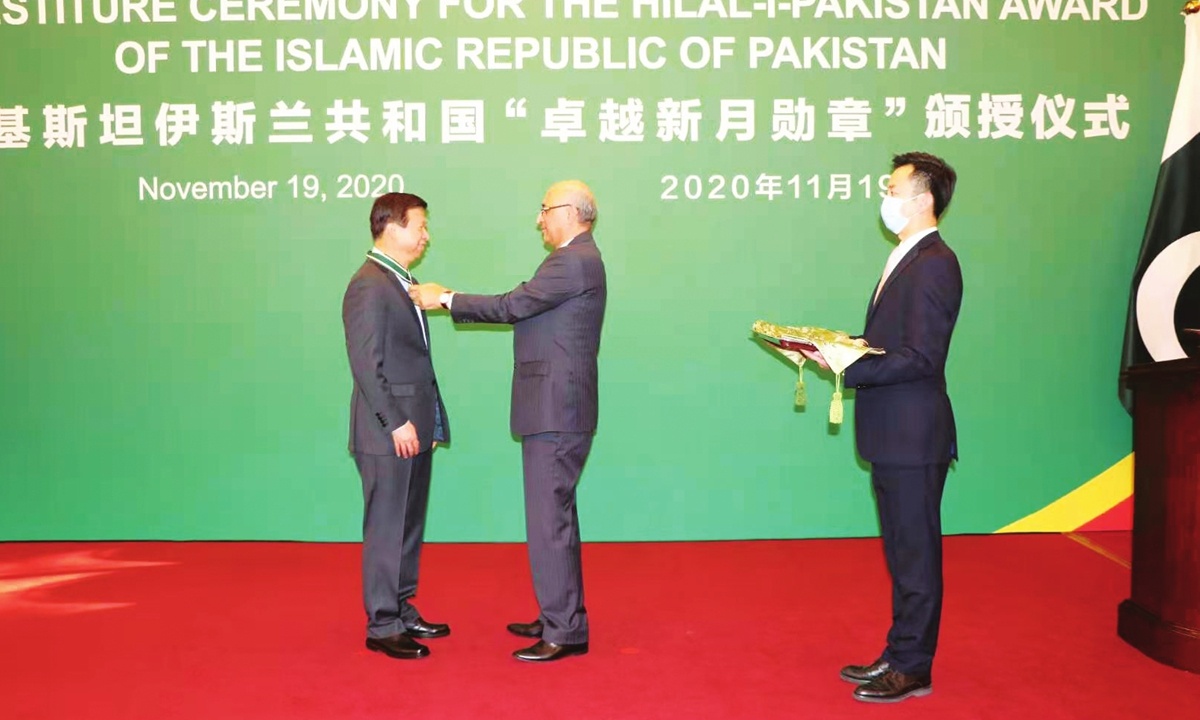 Song Tao, a senior Chinese official, was awarded "Hilal-i-Pakistan" by Pakistan's top diplomat in China on behalf of Pakistani President at Diaoyutai State Guesthouse in Beijing on Thursday.

In recognition of his outstanding services toward Pakistan and for strengthening Pakistan-China relations, Ambassador Moin ul Haque presented the award to Song Tao, head of the International Department of the Communist Party of China Central Committee (IDCPC).

The award statement said Song "has been a great friend of Pakistan and an ardent advocate of Pakistan-China friendship. In his capacity as Minister IDCPC, he has been instrumental in promoting the sustainable and healthy development of Pakistan-China exchanges in the spheres of people-to-people contacts and party-to-party linkages."

He is highly appreciated for playing a key role in fostering greater mutual understanding between the CPC and various political parties of Pakistan, thereby contributing to consolidating the all-around social consensus on the Pakistan-China All-Weather Strategic Cooperative Partnership and jointly building a closer Pakistan-China Community for a Shared Future in the New Era.

Meanwhile, Song was also the force behind moves to strengthen political support for realizing the China-Pakistan Economic Corridor (CPEC)'s potential as a game-changer for Pakistan's socio-economic development.

Under the theme of "working together to promote economic development and improve people's lives through high-quality CPEC cooperation, Song co-chaired a virtual conference together with Chairman of Pakistan's Senate, Sadiq Sanjrani, in August wherein he vowed to continue strategic communication.

In his keynote speech, Song reportedly thanked Pakistani President Arif Alvi for sending the congratulatory letter to the virtual event, noting that party-to-party cooperation between China and Pakistan was increasing and that the CPEC had entered into a new era.

Officials from the IDCPC and officers of the Embassy of Pakistan also participated in the award ceremony.