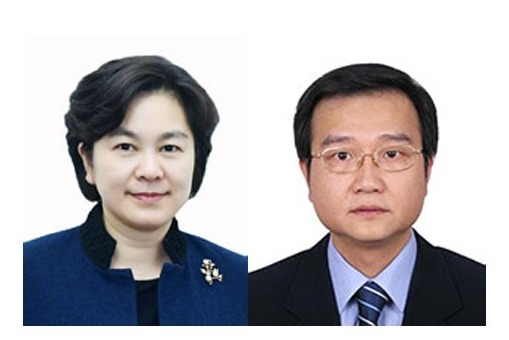 Two Chinese Foreign Ministry diplomats, Deng Li and Hua Chunying, have been promoted, according to the ministry's website.

The two officials stepped into the new posts after Qin Gang, former vice-foreign minister, was appointed ambassador to the United States in July and went to Washington.

Hua, known in recent years as the ministry's spokeswoman, has been promoted to assistant foreign minister, according to the section of the website that introduces the ministry's "principal officials".

Her updated profile page says her areas of responsibility now are "information, protocol and translation affairs".

Before serving as ministry spokeswoman, Hua worked with its Department of European Affairs and once served at the embassy in Singapore and the mission to the European Union.

Nearly nine years ago, Hua became a spokeswoman responding to questions from home and abroad about China's foreign policy.

She made her first public appearance in that role in November, 2012, at a daily news conference in Beijing and was introduced to the journalists by Qin, who then headed the ministry's Information Department.

Hua was promoted to the department's chief in 2019.

Born in 1965, Deng started his diplomatic career in 1987 with the ministry's Department of West Asian and North African Affairs. He headed the department from 2015 to 2019.

Deng has also worked for the Chinese embassies in Mauritania, Algeria, Belgium and France. He was ambassador to Turkey in 2019 and was promoted to assistant minister last year.