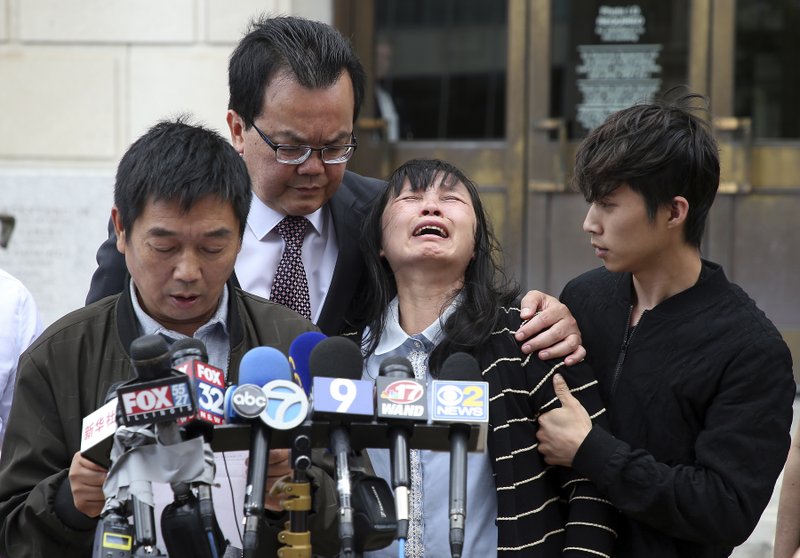 Lifeng Ye, the mother of slain University of Illinois scholar Yingying Zhang, cries out in grief as her husband Ronggao Zhang, far left, addresses the media after a jury found Brendt Christensen guilty of her murder Monday, June 24, 2019. (Photo: AP)

PEORIA, the United States, July 8 (Xinhua) -- Sentencing phase for Brendt Christensen who has been ruled by a US jury guilty of kidnapping and killing Chinese visiting scholar Zhang Yingying in 2017, started Monday afternoon at a federal courthouse in Peoria, US state of Illinois.

During this penalty phase, both prosecutors and the defense lawyers would first make opening statements separately, followed by witnesses' testimony and cross-examination from both sides.

After that, a jury of seven men and five women will decide if Christensen gets death penalty or life in prison.

On Monday afternoon, US Department of Justice attorney James Nelson gave the opening statement for the prosecution, starting with the last line from Zhang's diary: "Life is too short to be ordinary."

"She had no way of knowing how short her life would be," Nelson said.

Describing Zhang's life as excellent, he said: "Yingying was far more than just an international scholar. She was a devoted and loving daughter... she was the hope of her family."

Nelson said the family is still in deep sorrow, mentioning that her father has difficulty looking at photos of her.

Calling for death penalty, Nelson said it was "not an ordinary crime. It was cold, calculated, cruel and months in the making."

Zhang Yingying, a 26-year-old Chinese scholar, went missing on June 9, 2017, after getting into a black Saturn Astra about five blocks away from where she got off a bus on her way to an apartment complex to sign a lease.

Christensen was arrested on June 30, 2017, after being caught on tape pointing out people he described as "ideal victims" during a vigil in Zhang's honor.