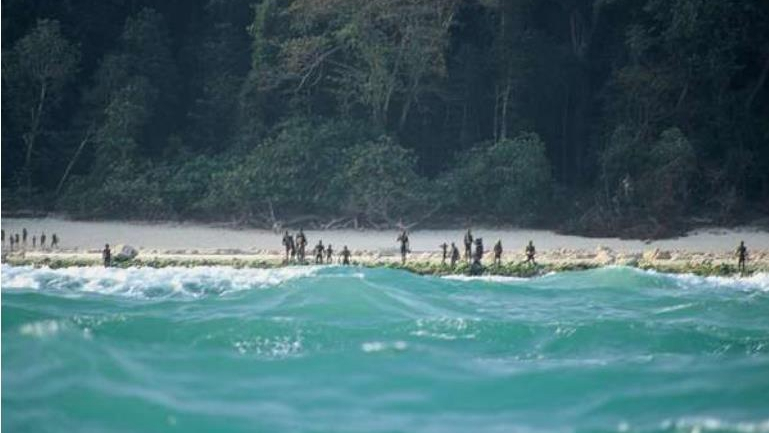 The Sentinelese stand guard on an island shore. (Photo: CGTN)

A group of Sentinelese tribesmen stood on guard at the beach carrying bows, arrows, and spears as police officials continued to search for US citizen John Allen Chau's body near the forbidden North Sentinel Island in India's Andaman and Nicobar Islands on Saturday.

A crew member turned off the police boat's motor as the team peered at the tribesmen through binoculars, at a safe distance from the shore, out of bow-and-arrow range.

"Our team saw around five to six tribesmen, they appeared watchful as if they were guarding something, carrying bows and arrows," Dependra Pathak, director general of Andaman and Nicobar police, told CGTN Digital.

Chau, 27, illegally landed on the protected North Sentinel on November 18. The island is home to the 60,000-year-old Sentinelese community, believed to be the last pre-Neolithic tribe in the world. The American adventurer and Christian missionary was allegedly trying to introduce his religion to the indigenous tribe.

Pathak said his team approached within 400 meters of the spot where Chau was last seen by the fishermen who helped him reach the island.

"We have sketched out the crime scene and the sea route taken by Chau. Another attempt to retrieve the body will be made after due consultations with tribal experts," said Pathak while speaking with CGTN Digital.

Very little is known about the Sentinelese tribe of North Sentinel, an island approximately the size of Manhattan. Its members are known for reacting with hostility and violence to outsiders' attempts to interact with them. The island is off-limits to visitors and the tribe is protected under the Indian law.

"It's impossible to retrieve Chau's body. The bodies of the two fishermen killed by the tribe in 2006 have still not been recovered," said Sophie Grig, a senior research fellow at Survival International, a non-profit organization that works for the rights of uncontacted tribes, in an interview with CGTN Digital. "Such operations will endanger more lives," she warned.

"The operation to get back the bodies of the two fishermen was abandoned after the tribe attacked the police team several times during the expedition," Grig told CGTN Digital. "After months of futile efforts the families of the fishermen themselves told the police that they don't want the bodies. I think it's going to be the same this time as well."

The first and only friendly contact with the tribe was made by a team led by Indian anthropologist Trilokinath Pandit in 1991.

"I don't think his body will ever be found," 86-year-old Pandit said while speaking exclusively to CGTN Digital on Chau's case.

"Tribal experts cannot help, our knowledge about the tribe's behavior is not enough for the return of his body," Pandit, who rejects the police's approach, added.

"It is better to leave them on their own and not disturb them any further."

Since the tribe is protected under the law, no legal action can be taken against its members. Three of the seven people who were involved in ferrying Chau to the island are under police remand on multiple charges including culpable homicide not amounting to murder.

Meanwhile, Chau's family members released a statement on Instagram saying they have forgiven the tribe and are not pushing for his remains to be returned to the US

"He loved god, life and helping those in need and had nothing but love for the Sentinelese people," the statement read.