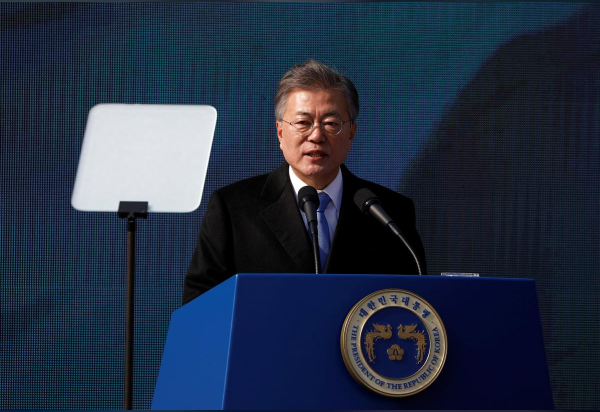 South Korea said on Friday it was seeking high-level talks this month with North Korea to prepare for a summit and that South Korean President Moon Jae-in may meet Donald Trump before the U.S. president’s planned meeting with the North Korean leader.

Amid a flurry of diplomacy from Asia to Europe to Washington, Trump reaffirmed his plan to meet with North Korea’s Kim Jong Un by the end of May during a phone call on Friday with Moon and both voiced “cautious optimism” about efforts to resolve the crisis over North Korea’s nuclear weapons.

A White House statement said Trump and Moon discussed preparations for their upcoming engagements with Pyongyang and agreed that “concrete actions,” not words, were the key to denuclearization of the Korean peninsula.

They “emphasized that a brighter future is available for North Korea, if it chooses the correct path,” it said.

Earlier, Moon’s chief of staff, Im Jong-seok, said proposed North-South talks in late March would cover key agenda topics and other details of the pending summit between Moon and Kim.

If North Korea agrees to the talks, they would offer an opportunity for Pyongyang to break its silence on what Seoul says is Kim’s desire to meet Trump and Moon and his willingness to freeze his country’s nuclear and missile programs.

Im said Moon may meet Trump after an inter-Korean summit but before Trump’s planned summit with Kim in May.

Even amid North Korea tensions, Trump has repeatedly denounced a U.S. free trade deal with ally South Korea as “unfair” and threatened many times to scrap it.

Senior South Korean officials met Kim Jong Un in Pyongyang this month and told Washington the North Korean leader was open to giving up his nuclear weapons if North Korea’s security was guaranteed.

Trump responded with a surprise announcement that he was willing to meet Kim in a bid to resolve the crisis over North Korea’s development of nuclear missiles capable of hitting the United States.

North Korea’s state media has yet to comment on the content of Kim’s meeting with the South Koreans, but North Korean Foreign Minister Ri Yong Ho arrived in Sweden this week for talks with his Swedish counterpart Margot Wallstrom, prompting speculation that he could lay the groundwork for a Trump-Kim summit.

Wallstrom’s press secretary Pezhman Fivrin said the talks, which had been due to end late on Friday, would continue on Saturday. He declined to give further information.

Swedish Prime Minister Stefan Lofven said on Friday that Sweden, whose embassy represents U.S. interests in Pyongyang, was ready to act as a facilitator to help resolve tensions.

“If we can act as a facilitator such that something comes out of this, then we will of course do so,” he told a joint news conference with German Chancellor Angela Merkel in Berlin.

South Korea’s Foreign Minister Kang Kyung-wha was in Washington on Friday for talks expected to focus on North Korea and trade, as was Japanese Foreign Minister Taro Kono, who met U.S. Deputy Secretary of State John Sullivan in the morning.

The U.S. State Department said the two sides called the announcement of a meeting between Trump and Kim a “historic opportunity,” while stressing that the U.S.-led campaign to press North Korea to give up its nuclear weapons through sanctions must continue until Pyongyang “takes credible, verifiable, and concrete steps toward denuclearization.”

Kang was expected to hold talks later on Friday with Sullivan, who is standing in after Trump fired Rex Tillerson as U.S. secretary of state this week. It was not known whether the two Asian ministers would meet CIA Director Mike Pompeo, who Trump has tapped to replace Tillerson.

The Japanese and South Korean ministers were expected to meet in Washington on Saturday.

On Thursday, the head of the U.S. Pacific Command, Admiral Harry Harris, cautioned the United States could not be overly optimistic about the outcome of any summit between Trump and Kim and must go into it with “eyes wide open”.

The reactor could be used to produce weapons-grade plutonium, but North Korea is believed to already have enough fissile material for multiple nuclear bombs, according to Joshua Pollack, a senior research associate at the Middlebury Institute of International Studies at Monterey.

An official at South Korea’s defence ministry said authorities were aware of the Jane’s report, which follows a similar one on the 38 North website this month that said a nearby reactor had also continued to show signs of operation.

The U.S. State Department declined to comment on the Jane’s report, calling it an intelligence issue.