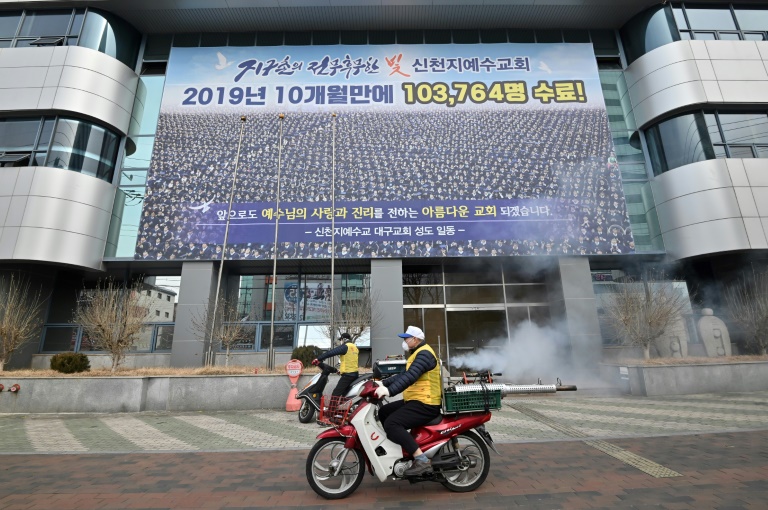 South Korean health officials spray disinfectant in front of the Daegu branch of the Shincheonji Church of Jesus in an attempt to combat the COVID-19 coronavirus outbreak. (Photo: AFP)

Seoul's city government has asked prosecutors to press charges, including murder, against the founder of a secretive religious sect for failing to cooperate in containing the spread of the deadly coronavirus.

South Korea has seen a surge in the number of infections -- adding more than 4,000 cases in less than two weeks -- with around 60 percent of the national total linked to the Shincheonji Church of Jesus.

As officials try to track down and test more than 266,000 people associated with Shincheonji, the entity has been accused of submitting false lists of its members to authorities.

The Seoul City government said it had filed a legal complaint to prosecutors against 12 leaders of the sect -- including its founder, Lee Man-hee -- accusing them of homicide, causing harm and violating the Infectious Disease and Control Act.

"They did not take any action to encourage its members to actively cooperate with the health authorities to prevent further spread of the COVID-19," the city authorities said in a statement.

Seoul mayor Park Won-soon added on his Facebook page: "If they had actively taken early measures, we could have prevented the explosive rise of COVID-19 cases in Daegu and North Gyeongbuk province and the deaths of several people."

Under South Korean law prosecutors can make their own decision on whether to act on complaints filed to them, and Yonhap news agency reported that the Seoul City request had been assigned for investigation.

Shincheonji declined to comment, saying: "The most important thing for us now is disinfecting and our highest priority is to end the COVID-19 outbreak soon."

The outbreak among Shincheonji members began with a 61-year-old woman, who developed a fever on February 10 but attended at least four church services in Daegu -- the country's fourth-largest city and epicentre of its outbreak -- before being diagnosed.

The organisation has apologised on behalf of its members who have not answered survey calls but has insisted that it has been fully cooperating with the government to contain the virus.

Shincheonji, founded in 1984, proclaims Lee has donned the mantle of Jesus Christ and will take 144,000 people with him to heaven on the day of judgement.

But with more church members than available places in heaven, they are said to have to compete for slots and pursue converts.