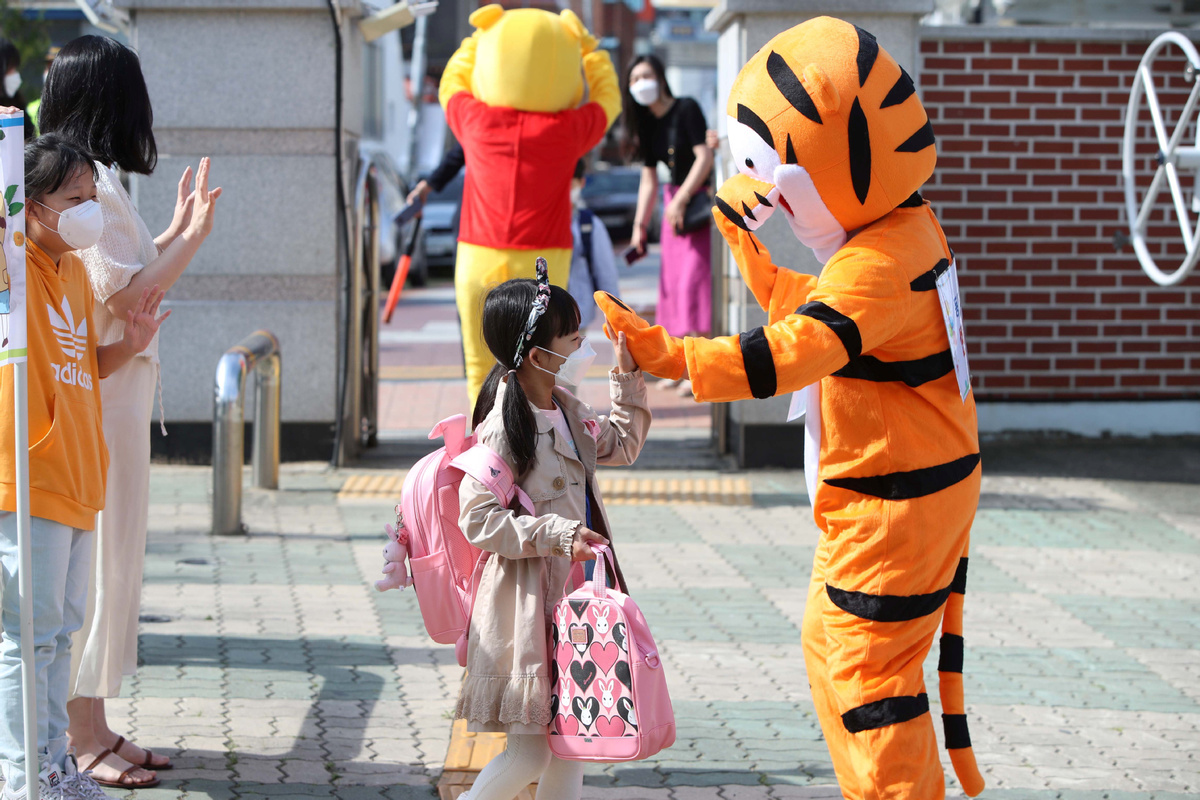 A teacher in a cartoon costume greets a student amid the coronavirus disease (COVID-19) outbreak at an elementary school in Daegu, South Korea, May 27, 2020. (Photo: Agencies)

SEOUL-South Korea reported its biggest jump in novel coronavirus infections in seven weeks on Wednesday, driven by a new cluster at an e-commerce warehouse on Seoul's outskirts, as millions more pupils returned to school.

The country has been held up as a global model in how to curb the virus and has rushed to contain new infections as life returns to normal.

But officials announced 40 new cases on Wednesday-taking its total to 11,265-with most new infections from the densely populated Seoul metropolitan area. It was the largest increase since 53 infections were announced on April 8.

An outbreak at a warehouse of e-commerce firm Coupang in Bucheon, west of Seoul, has seen at least 36 cases so far.

"It is suspected that the basic regulations were not enforced at the warehouse," said Vice-Health Minister Kim Gang-lip. "If quarantine rules are not implemented at workplaces, it could lead to a dreadful result of a mass infection."

In India, the country's coronavirus caseload has surpassed 150,000, with another single-day high of more than 6,000 reported on Wednesday. The spike comes as Prime Minister Narendra Modi's government prepares a new set of guidelines, with the fourth phase of the two-month lockdown across the country set to end on Sunday.

In the Middle East, Turkey's COVID-19 cases on Tuesday rose to 158,762 and its death toll climbed to 4,397, amid a continued slowdown in the pandemic.

Turkey's biggest city Istanbul on Tuesday disinfected mosques to make them ready for reopening on Friday as part of the government's normalization process amid a slowdown in the COVID-19 pandemic.

Meanwhile, workers conducted sanitization works in the Sultanahmet Mosque, which is also a major tourist attraction spot on the historical peninsula of the city's European part.

In Saudi Arabia, the authorities reported 1,931 new cases in the latest 24-hour period, taking the total number in the kingdom to 76,726. Its death toll grow by 12 to 411, according to health authorities.

Despite the continued rise in coronavirus infections, Saudi Arabia announced a plan to gradually lift the anti-coronavirus measures in three phases.

In South Africa, President Cyril Ramaphosa announced on Tuesday that churches and other recognized places of worship will operate from June when the country eases lockdown restrictions further, but will be limited to 50 people or less.

The coronavirus had infected 23,615 people in South Africa and killed 481 as of Tuesday.