South Korea on Tuesday ordered all schools and kindergartens in the greater Seoul region to switch to online classes as authorities battle multiple coronavirus clusters. 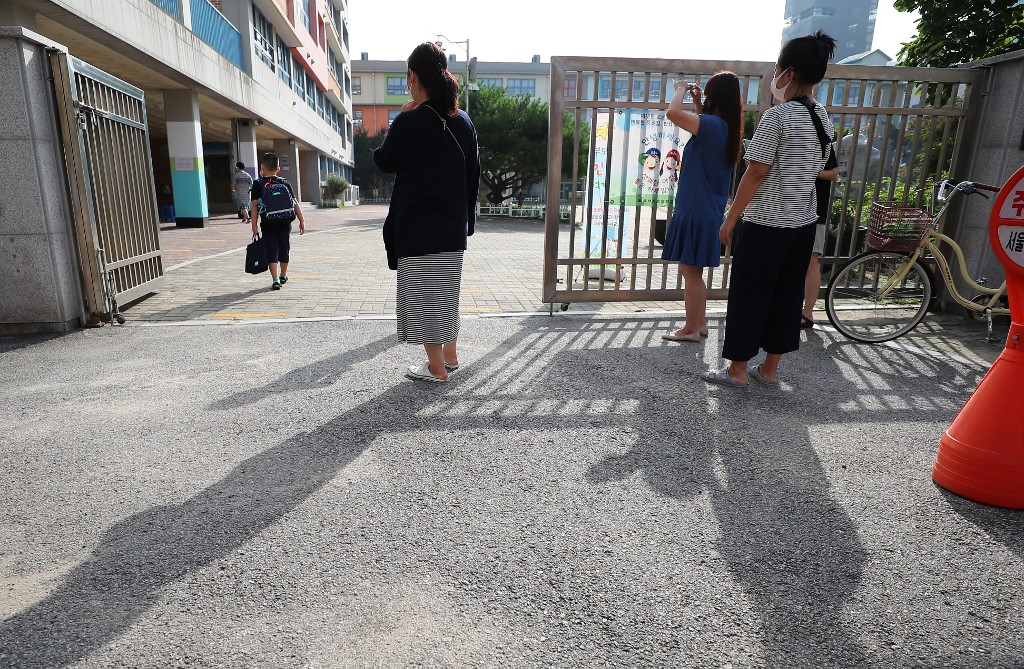 Mothers watch their children go into the grounds of an elementary school in Seoul on August 25, 2020.

The country's "trace, test and treat" approach to curbing the virus has been held up as a global model, but it is now trying to contain several outbreaks, mostly linked to Protestant churches.

The numbers are low in global terms but represent the South's 12th consecutive day of triple-digit increases after several weeks with numbers generally in the 30s and 40s.

Most of the new cases have been centred in the greater Seoul region, home to half the country's 52 million people.

Authorities are now scrambling to tighten social distancing rules and said that schools and kindergartens in Seoul, Incheon and neighbouring Gyeonggi province will switch to online classes from Wednesday until September 11.

"The alarming emergence of mass infections since August is turning up as infections of our students and staff members," education minister Yoo Eun-hae told reporters.

Nearly 200 students and school staff had been infected with the virus in the past two weeks, she said.

The only exception is for senior students in their final year of high school, who are due to take crucial university entrance exams in early December.

The South Korean military also bolstered its guidelines, requiring all service members to wear facemasks at all times in public, both indoors and outside.

Training or gatherings of more than two people are also banned unless masks are worn, the defence ministry said in a statement.

Virus curbs were tightened in the Seoul region last week and were further expanded to the rest of the country on Sunday.

The measures include restrictions on large gatherings such as religious services and the closing of nightclubs, karaoke bars and cybercafes.

Authorities have warned of tougher social distancing rules -- which would include closing businesses -- if the number of new cases continues to grow rapidly.