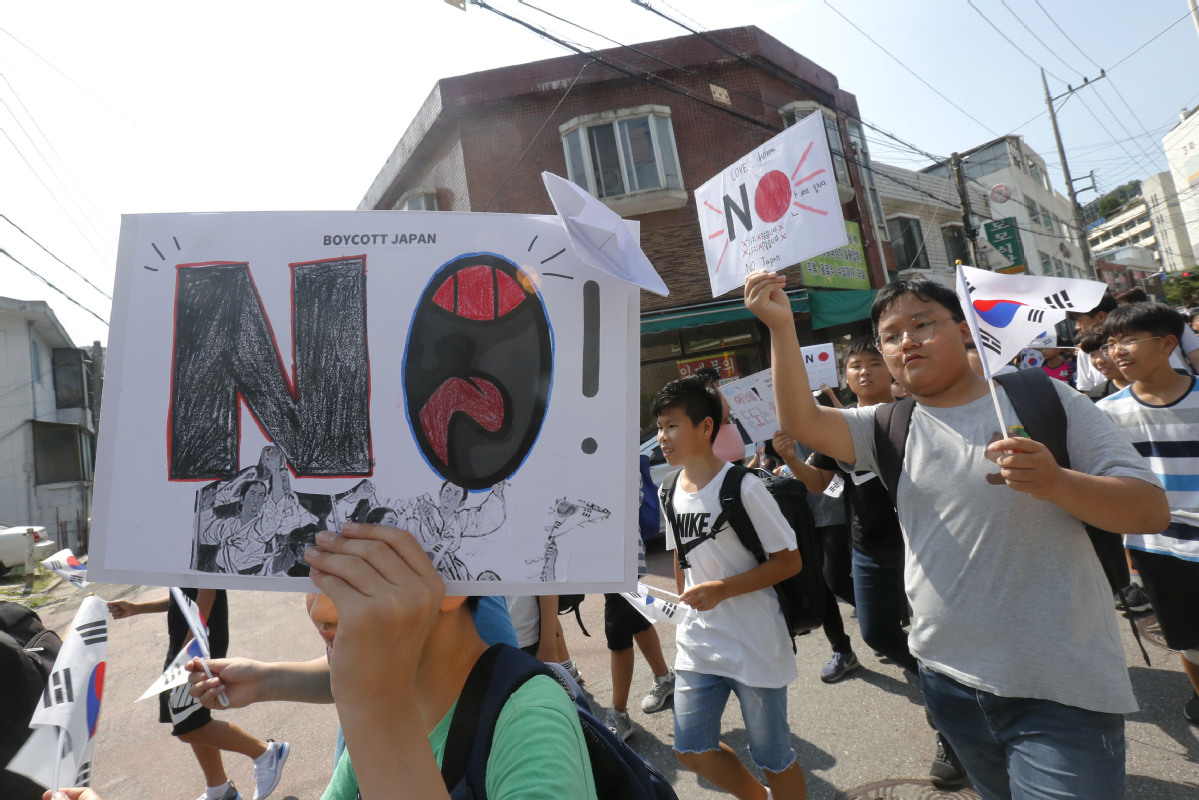 The removal of South Korea from a Japanese list of preferred trading partners took effect on Wednesday, a step that has aroused a strong backlash from Seoul.

The latest measure by Japan was approved by the cabinet of Prime Minister Shinzo Abe on Aug 2 and means South Korea will no longer enjoy minimum trade restrictions on such goods as electronic components. Japanese companies must now receive case-by-case approval from the Ministry of Economy, Trade and Industry before these goods can be exported.

Reuters said Nagamine declined to comment on the formal complaint lodged by Seoul. But Japanese Chief Cabinet Secretary Yoshihide Suga on Wednesday said that Tokyo's decision was "appropriate", and blamed South Korea for its actions regarding colonial-era forced labor for the strained ties.

Relations between the two countries worsened late last year after South Korea's Supreme Court ordered compensation for some of its citizens forced to work at Japanese firms during Japan's 1910-45 occupation. Japan said the issue has already been settled by a 1965 bilateral agreement.

"South Korea considered Tokyo's measure was clear retaliation for the court ruling and posed a grave challenge that shook the foundation of the two countries' cooperative relations," the South Korean Foreign Ministry said in a statement.

"We once again urge Japan to refrain from further worsening the situation and sincerely respond to our offer of dialogue to restore relations," South Korean Prime Minister Lee Nak-yon told the meeting.

Hiroshige Seko, Japan's minister of economy, trade and industry, however, downplayed the effect this move will have on bilateral ties when he spoke with reporters late on Tuesday.

"This is for the purpose of executing export oversight in an appropriate manner, and any impact on Japan-South Korean relations is not part of the consideration," Seko said.

Observers have noted that the bilateral relations between Seoul and Tokyo have already plunged to new lows recently, and might have a severe "side effect" on the stability and development on the Northeast Asian region.

Zhou Yongsheng, a professor on Japanese studies at China Foreign Affairs University, said the measures could adversely affect both South Korean manufacturers and Japanese exporters as their supply chains are closely connected.

"Furthermore, the escalating trade dispute between Japan and South Korea will cause a domino effect on the global supply chains in computer and smartphone industries, affecting the economic stability of Northeast Asia region and even the whole of Asia, since both countries are important contributors to the Asian economy," he said.

The action represents the second round of trade restrictions Japan put into force against South Korea. Early last month, Japan tightened regulations on its exports to South Korea of three materials vital to make memory chips and display panels, which are mainstays of the South Korean economy.

South Korea, for its part, has decided to take Japan off its own "white list" of trusted trade partners and announced tighter restrictions for importing coal ash and some waste recycling materials from Japan earlier this month.