BELGRADE, May 7 (Xinhua) -- The NATO bombing of the former Chinese embassy in the Federal Republic of Yugoslavia in 1999 was commemorated on Friday by officials from the Serbian government and Chinese embassy. 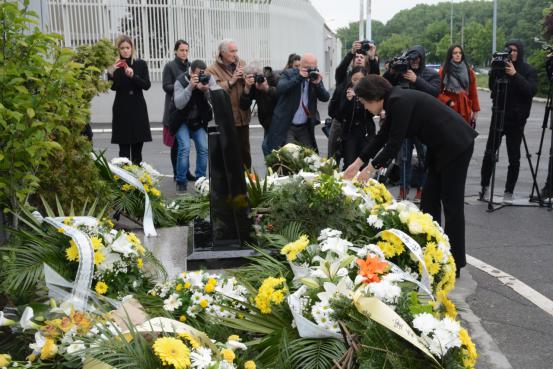 The Chinese embassy in Serbia holds a ceremony to commemorate three reporters killed in a bombing conducted by the NATO forces in 1999 on May 7, 2019. (File photo: Embassy of the People's Republic of China in the Republic of Serbia)

Wreaths were laid by the Ministry of Labor, Employment, Veteran and Social Affairs Darija Kisic Tepavcevic, head of the Association of Journalists of Serbia (UNS) Vladimir Radomirovic, Chinese ambassador to Serbia Chen Bo and citizens to commemorate the deaths of three Chinese journalists killed during a NATO bombing of the Chinese embassy on May 7, 1999.

Chen thanked the Serbian people for keeping the memory of the attack alive, reminding that the martyrs of the attack "paid the price of truth, justice, and righteousness with their lives."

"We will never forget the crime conducted by the aggressor, who most brutally violated the human rights, in the name of the so-called protection of human rights," she said.

Chen said that the newly built Chinese cultural center here represents a new symbol of the iron friendship between Serbia and China and the striving of both countries for justice.

Minister Kisic Tepavcevic said that that the Chinese people and Chinese journalists were "together with us in the hardships" and that is why the Serbian people come here to honor them every year.

"The People's Republic of China is our great friend, who always provides immense support to us in all challenges that we come across. It is a true privilege to have such a friend like the Chinese people," she said.

The NATO bombings of Yugoslavia started on March 24, 1999. During the 78-day military attack, 2,500 civilians were killed, and around 25,000 objects were damaged, including airports, hospitals, schools, cultural monuments and road infrastructure, according to the Serbian government.