BELGRADE, May 27 (Xinhua) - Serbian Prime Minister Ana Brnabic and Chinese ambassador to Serbia Chen Bo welcomed the final batch of COVID-19 vaccines from China on Thursday at the Belgrade airport. 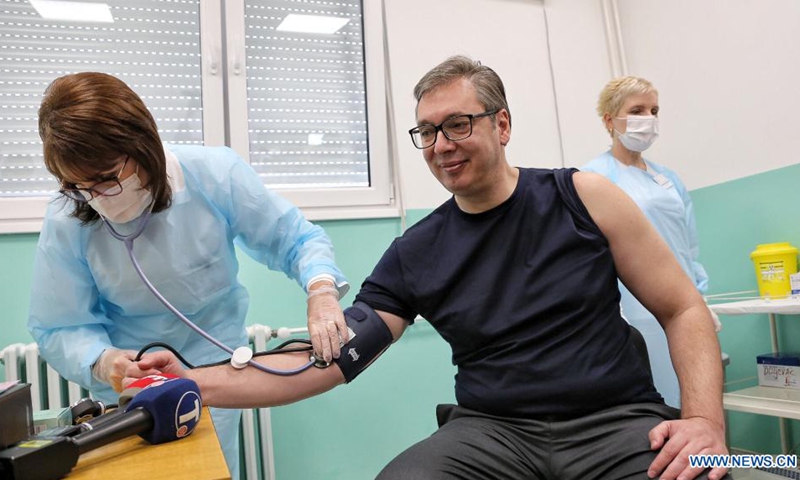 Brnabic recalled that the vaccines have been imported from China since January, and this was the final delivery envisaged in the contract that Serbia signed with Sinopharm in March.

She said that 45.3 percent of adults in Serbia have been vaccinated so far, emphasizing that "Sinopharm vaccines showed reliability that no one could have expected in difficult times and circumstances," and expressed gratitude to Chinese partners.

Brnabic added that Serbia has plenty of vaccines available at the moment and that more doses of different manufacturers will arrive in the coming days.

According to her, since the beginning of the epidemic, 58 planes from China landed in Belgrade carrying donations in medical equipment, while three freight trains delivered goods that Serbia purchased.

Ambassador Chen said she was happy to receive the final batch of vaccine, emphasizing that Serbia and China are iron-clad friends and partners in the fight against the coronavirus.

According to her, the Chinese company Sinopharm complied with all contractual obligations and delivered all quantities within the deadline approved by the two parties.

"This fully shows that China and Serbia are iron-clad friends and partners in critical situations. We will continue our cooperation in the field of vaccines and joint fight against the epidemic," Chen concluded.

The number of new cases in Serbia rapidly decreased in May, and during the past 24 hours, 387 new infections were confirmed, while 981 people remained hospitalized. Since the beginning of the epidemic, 6,811 people have died of COVID-19 in the country.