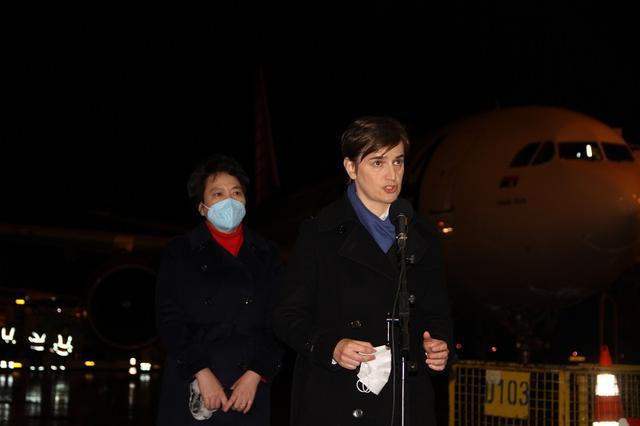 BELGRADE - A second shipment of Sinopharm's COVID vaccine arrived from China at the Belgrade Airport on Wednesday night.

Saying that the new batch of vaccines will help save thousands of lives, Brnabic expressed gratitude to China as the quantities enabled the country "to be second in Europe and seventh in the world in the number of vaccinations."

The country first imported 1 million doses of the Sinopharm's vaccine on Jan. 16.

Ambassador Chen expressed her admiration for Serbia's organization of the vaccination campaign, saying that she is glad that Chinese vaccines have contributed in the process.

Official data show that so far around 600,000 people were vaccinated in Serbia, most of whom received Sinopharm's vaccines, including state officials, policemen, soldiers, doctors, and teachers.

Since Dec 24, 2020 when the vaccination of high-risk groups began in the country, the Serbian people have been free to opt for vaccines produced by several vaccine manufacturers, including Sinopharm, Pfizer-BioNtech, and Sputnik V.