Serbia's prime minister warned on Wednesday that the formation of a Kosovo army could trigger Serbia's armed intervention in the former province — the bluntest warning so far amid escalating tensions in the Balkans. 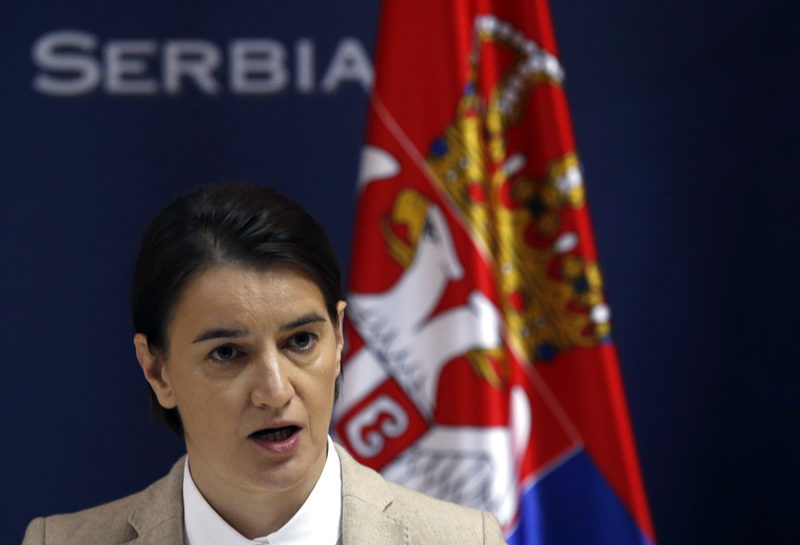 Serbian Prime Minister Ana Brnabic said that she hopes "we won't ever have to use our army, but unfortunately that is currently one of the options on the table."

Kosovo's parliament will vote Dec. 14 on transforming the country's security forces into a regular army. Serbian officials allege the army would be used to chase the Serb minority out of Kosovo — a claim repeatedly denied by Kosovo officials.

NATO Secretary-General Jens Stoltenberg on Wednesday issued a warning on Kosovo's intention to transition into army.

"Such a move is ill-timed. It goes against the advice of many NATO allies and may have serious repercussions for Kosovo's future Euro-Atlantic integration," he said.

Brnabic said Kosovo's ethnic Albanian leadership should "come to their senses," warning: "We cannot stand aside and watch in silence while someone is conducting new ethnic cleansing" of Serbs in the Balkans.

Kosovo Prime Minister Ramush Hardinaj said Wednesday that it's "a pure lie" that the intentions of a new Kosovo army would be to occupy northern Kosovo where a majority of Serbs live.

"The army is not for the north. Our army is for Afghanistan and Iraq, to help those countries" in peacekeeping missions, he said, according to Kosovapress news agency.

Kosovo declared independence in 2008. Serbia and its allies Russia and China don't recognize Kosovo as a country, while the United States and most of the West do.

Serbia lost control of Kosovo after a 1998-99 war for independence that left more than 10,000 dead. Serbia's bloody crackdown against separatists there prompted NATO to launch airstrikes to stop the conflict.

Tensions between Serbia and Kosovo soared after the Kosovo government last month introduced a 100-percent tax on Serb imports — an apparent retaliation for a failed Kosovo bid for membership in the international police organization, Interpol, after intense Serbian lobbying.

Brnabic said that Serbia is losing 42 million euros ($48 million) a month because of the Kosovo tariffs hike.

Serbia has been strengthening its armed forces, devastated after the 1999 NATO intervention, mostly with Russian help.

An armed intervention by Serbia in Kosovo would trigger a direct clash with NATO-led peacekeepers stationed there. Serbia recently increased its saber-rattling, including raising the combat readiness of its troops over a series of small incidents.