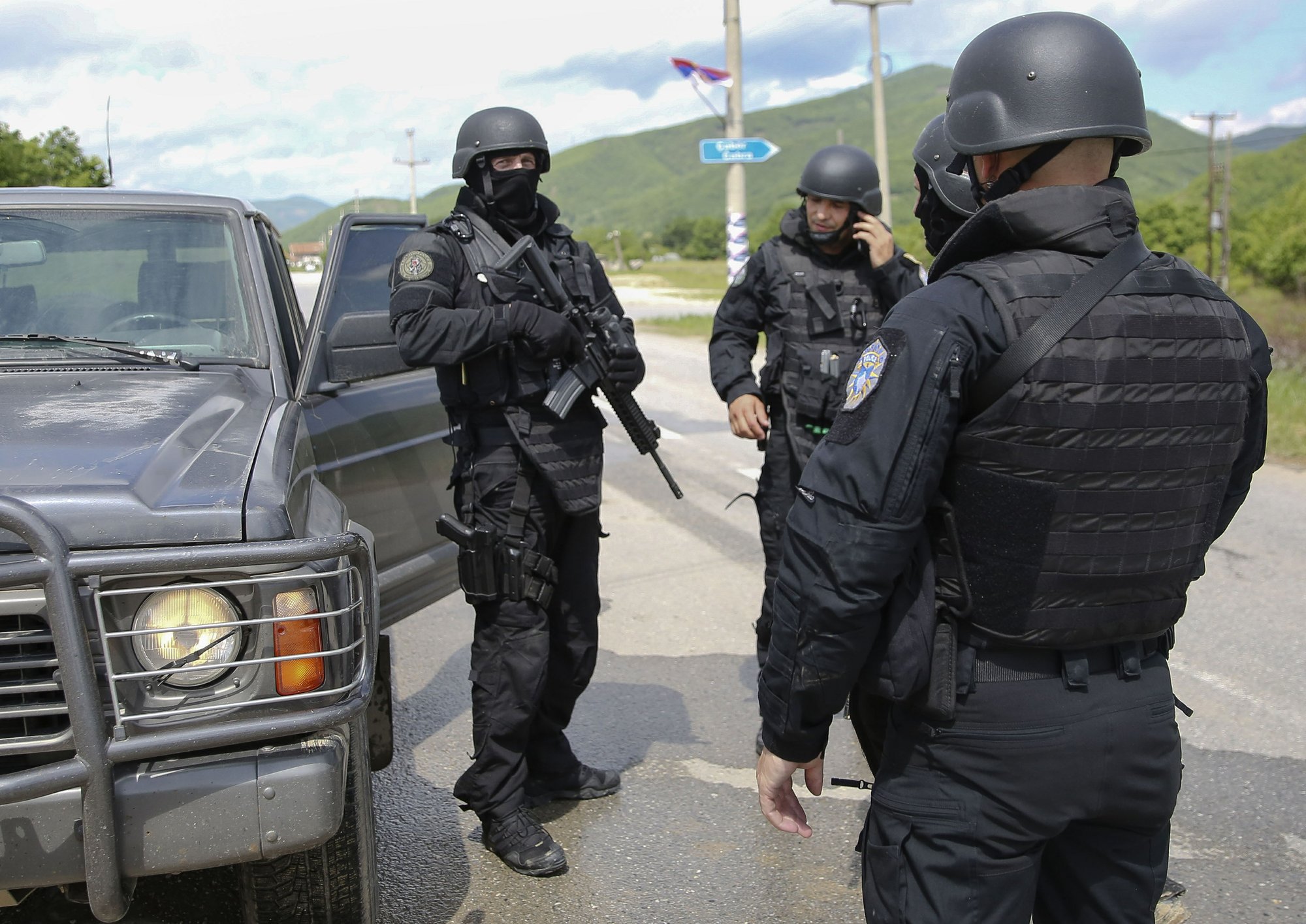 Kosovo police special unit members secure the area near the village of Cabra, north western Kosovo, during an ongoing police operation on Tuesday, May 28, 2019. (Photo: AP)

It was the latest flare-up in long-simmering tensions between Serbia and its former province, which declared independence from Belgrade in 2008 after a bloody 1998-99 war that ended only with NATO intervention. Serbs make up 90% of the population in northern Kosovo and they want to remain part of Serbia, not an independent Kosovo. Action by Kosovo special police there is rare and always triggers Serb anger.

Serbian President Aleksandar Vucic said Kosovo police arrested 23 people, including Serbs, Bosnians and a Russian, after “bursting” into several northern villages and the town of Mitrovica with armored vehicles. Vucic said he had seen video of the police firing “live ammunition” over the heads of unarmed Serbs, and said the operation was designed to intimidate minority Serbs in Kosovo, whose population is mostly ethnic Albanians.

Vucic said he has ordered soldiers near the border to be on “combat alert” to protect Serbs if tensions escalate.

“Serbia will try to preserve peace and stability, but will be fully ready to protect our people at the shortest notice,” Vucic told parliament.

He later said that the Kosovo policemen were withdrawing. But in a sign of lingering tensions, Serb troops and armored vehicles were seen leaving their barracks in central Serbia and an air force MiG-29 made a low pass near the border with Kosovo, according to the state Tanjug news agency.

Any Serbian armed incursion into Kosovo would mean a direct clash with NATO-led peacekeepers there. Lately, Serbia has been making frequent military threats against Kosovo as its political and military alliance with Russia grows stronger despite a proclaimed goal of European Union membership.

The UN mission in Kosovo said those detained included two of its staff, one of them Russian. It said both employees were hospitalized for injuries, and it called for all parties to help restore calm and security.

Russia called Kosovo’s actions a “provocation” and demanded the immediate release of the Russian UN employee.

Kosovo President Hashim Thaci said earlier that the Russian “was camouflaged under a diplomatic veil to hamper the police operation.”

Kosovo Prime Minister Ramush Haradinaj, confirmed on Twitter that police had carried out “an anti-smuggling and organized crime operation.” Thaci urged the ethnic Serb minority to remain calm and support the police.

“Those involved in illegal activities will go behind bars,” he wrote on his Facebook page, insisting that the police operation was not targeting people from specific ethnicities.

The spokesman for the NATO peacekeeping mission, Col. Vincenzo Grasso, said the force is monitoring the situation and coordinating with authorities.

“Because of the political sensitivity of the moment, Commander KFOR invites all the parties to deal with the disputes peacefully and responsibly, without any use of force or violence. People should stay calm, they have nothing to fear,” the mission said in a statement.

Serbia and allies Russia and China do not recognize Kosovo’s 2008 declaration of independence, while the US and more than 100 other countries do. The lingering dispute has stalled both countries’ efforts to become EU members.

The two sides had been taking part in an EU-facilitated dialogue, but Serbia walked away in November after Kosovo slapped a 100% tax on Bosnian and Serbian imports, saying it will be lifted only when the two countries recognize Kosovo’s sovereignty.