Setting 2021 growth target at above 6 %, world will see China's landmarks 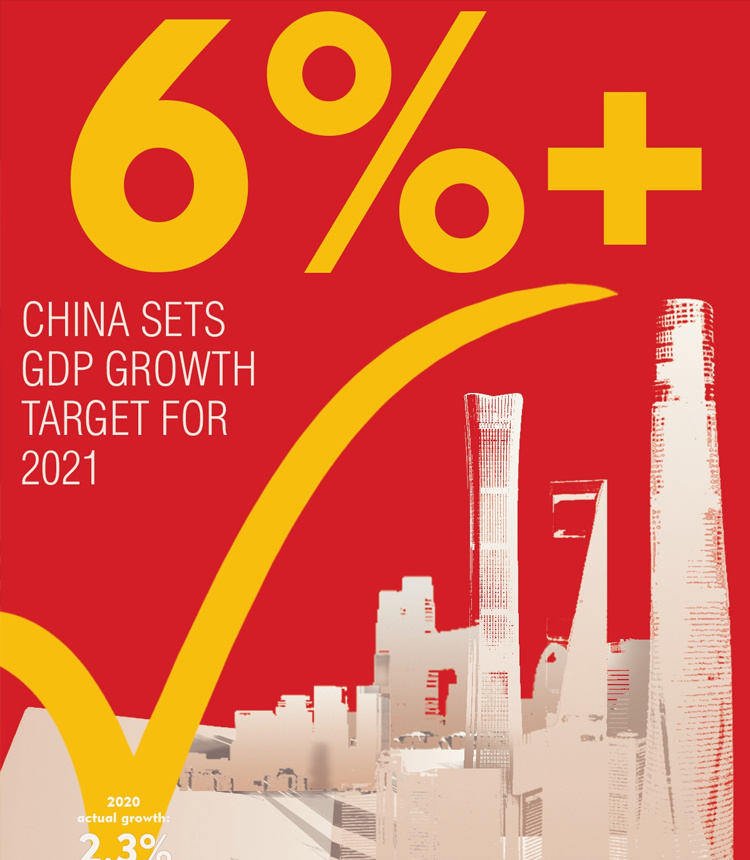 China sets GDP growth target of above 6 % in 2021, in show of post-COVID confidence. (Graphic: Xu Zihe/GT)

The annual session of the National People's Congress kicked off on Friday as Chinese Premier Li Keqiang delivered the Government Work Report at the opening of the session. The world's long-awaited GDP growth target this year is set at over 6 percent. Previously, it was widely predicted to be higher numbers and the International Monetary Fund (IMF) predicted that Chinese GDP will grow by 8.1 percent in 2021. However, over 6 percent means that 6 percent is the bottom line. "Over" is different from "about" in previous years. China's actual economic growth this year may be even higher.

China now focuses on high-quality development, and China has set a drop of around 3 percent in energy consumption per unit of GDP this year. A GDP growth target of over 6 percent reflects China's hopes of continuing to expand its economic scale, tackling various practical problems and satisfying Chinese people's wish for a better life in the new year.

The COVID-19 pandemic last year has been a very comparable test for various countries' economic resilience. China has become the only major economy with positive growth, and the 2.3 percent growth rate has become China's lowest in recent years. But China's growth rate has formed a 5.8 percentage point gap with that of the US, which plunged by 3.5 percent. This is the largest gap in recent years. China's economic growth gap is even wider compared with other Western countries. This year is the year of economic rebound in various countries, and the over 6 percent growth rate is still higher than the IMF's forecast for that of the other major economies this year.

Other major economies' economic trend is optimistic. The main reason is that their decline last year was so severe and this year, there will be a simple rebound. China's growth this year will first be rapid, then slower. China's economic growth rate in Q1 is widely predicted to exceed double digits. This is also because China's economy fell too much in Q1 in 2020, plunging by 6.8 percent. But after the growth rate slows down in the next few quarters this year, it will reflect a tough battle for China's high-quality economic growth.

Guided by resolving problems, China's development will be solid and robust. Other important plans provide realistic and reliable leverages for economic development. China's internal circulation has vigorously launched now, and the consumption boom during Spring Festival has allowed people to see new room and depth for the economic development. The new urbanization rate is expected to increase by one percentage point every year. Rural construction will drive new infrastructure investment. In addition, institutional dividends will continue to release and there is a lot to do to support the development of small and medium-sized enterprises.

The Chinese economy has a high level of globalization. Together with its strong inner driving force and systematic advantages, China has developed a comprehensive ability to cope with various challenges to ensure its growth and stability. The global economy is recovering this year, but uncertainty remains. For instance, as other countries' manufacturing sector resumes the production capacity, will it squeeze out the space for China's product export or increase the demand for Chinese products? Many analysts are optimistic about the impact of global economic recovery on the Chinese economy. China's export will be more robust this year.

Confidence is very important. It can activate all development elements and promote the realization of expected goals. Now the confidence of Chinese society is the strongest since the US launched its trade war against China. It is also a moment when the whole world looks favorably upon China. China has withstood the trade war and performed well in the anti-virus fight. China's image as a country that cannot be stricken down and that can cope with every challenge has been well established. There has been discussion that China's GDP can catch up with the US' in 2028, which is ahead of the expected time. This has never become the guidance for the development of the Chinese economy, but the positive view of China from the outside world can bring more opportunities to China.

Compared with China's actual condition, the target of above 6 percent is not high. What is important is the word "above." This is where the uncertainty of China's economy lies this year and points to the direction of our hard work. As China focuses on quality development, the essence of GDP is different from that in the past. Its expanding volume reflects its rising quality. The Chinese economy grows fastest among major economies -- this is China's real strength and from where the world best understands socialist China.

There is no doubt that no achievement comes easily. Although the Chinese economy will develop steadily, there are plenty of problems to be solved. Confidence does not equal pride and arrogance. The government should listen to the opinions and suggestions of companies, especially private ones, and care for people who suffered economic losses due to the pandemic. The economic growth target of above 6 percent should be used to support companies and boost social justice and fairness. China has many tasks to fulfill. As the world competes with China, China must compete with itself.