Seven children died and scores were injured early Monday when a school building collapsed in the Kenyan capital Nairobi, in an accident blamed on shoddy construction. 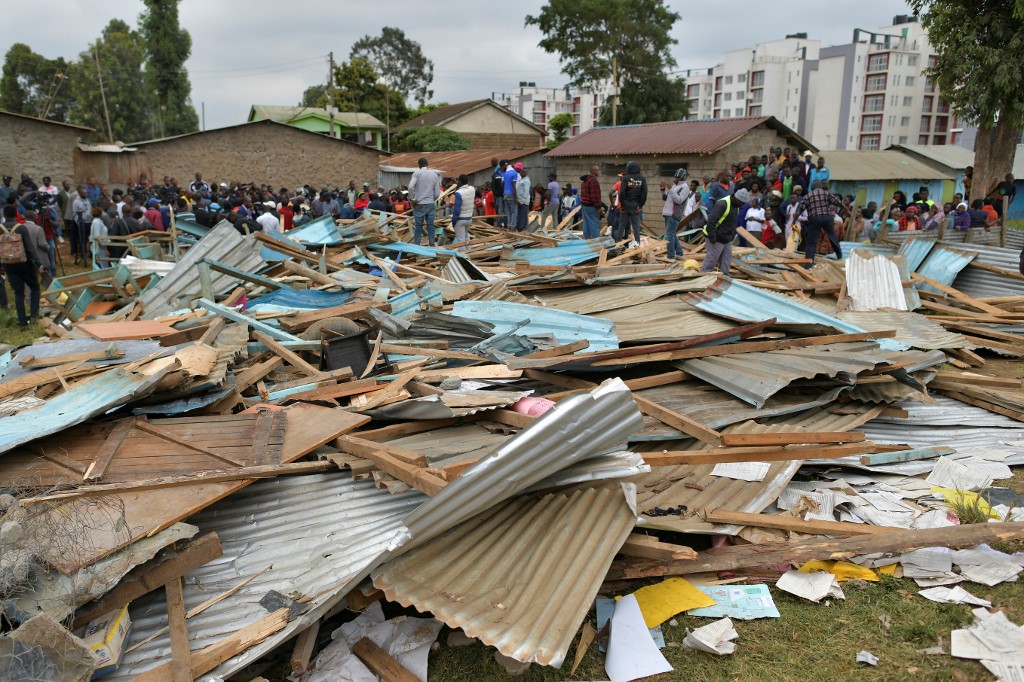 Relatives stand on debris of a collapsed school building, on September 23, 2019 in Nairobi. (Photo: AFP)

"So far we can confirm that we have seven fatalities and 57 others are in hospital," government spokesman Cyrus Oguna said at the scene.

Hundreds of angry residents of Dagoretti, a poor suburb where many live in makeshift homes, swarmed around the site where rescuers picked through the rubble.

An AFP reporter at the site said books and desks were strewn through the debris of the two-storey building, a semi-permanent structure made of concrete, iron sheeting and timber.

"I had just dropped my son to school, and heard screams on my way back, and that is when I found people assisting them out to hospital," said Margaret Muthoni at Kenyatta National Hospital, whose four-year-old son was injured.

"I am just lucky my son survived with injuries. It is a very unfortunate incident because some children have died," said Muthoni.

Kepha Otieno said he lost his five-year-old daughter to the tragedy.

"I just can't believe. It is too hard for me and the family," he said.

Evanson Kamuri, the chief executive of the Kenyatta National Hospital, told journalists that two of the injured children were in critical condition, while others had soft tissue injuries or light wounds and were being examined.

Dagoretti MP John Kiarie told KTN television that it appeared the first floor had collapsed on children on the ground floor -- however details were sketchy.

The school was a private institution. Kiarie said the area had no public land on which to construct a proper public school.

"It is the highest level of irresponsibility and greed when you look at this structure that came down, and even the ones standing. It is another disaster waiting to happen," said Shadrack Okelo, a local resident.

Moses Nyakiongora, an official with the National Building Inspectorate said at the scene: "This school was not properly constructed. It is totally substandard."

Education Minister George Magoha visited the scene, and vowed to build a public school in the area.

"What has happened here today is regrettable but investigations have been launched," he said.

"I have inspected the rest of the classrooms and they look stable."

"But the one that collapsed was substandard, it should not have been allowed to be there."

Numerous buildings have collapsed in Nairobi and other Kenyan towns with deadly results in recent years, as the country experiences booming growth in the construction industry, with contractors cutting corners or bypassing regulations through corruption.

In April 2016, 49 people were killed in the collapse of a six-floor building in the north-east of the capital.