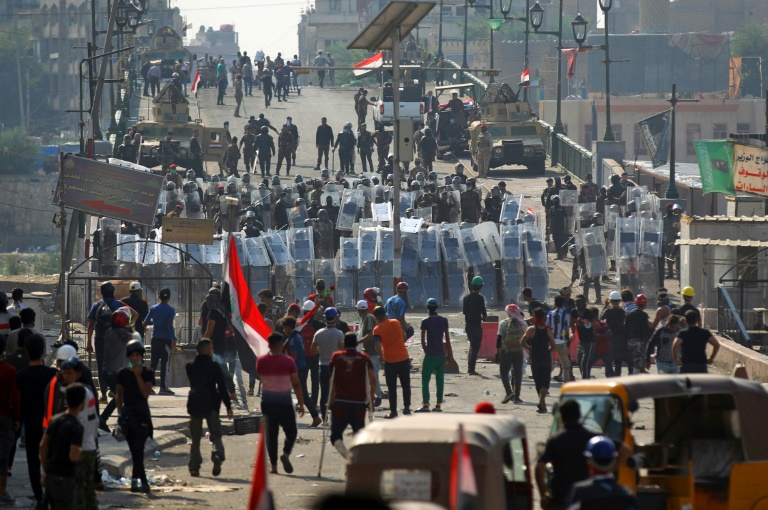 Iraqi security forces have battled to prevent the protesters camped out in east Baghdad from overrunning the bridges across the Tigris river that give access to government offices and foreign embassies on the west bank.(Photo: AFP)

Seven protesters were killed Saturday in Iraq as security forces cleared protest sites in Baghdad and Basra after political leaders agreed to stand by the embattled government by any means.

The leaders, sources told AFP, also agreed to put an end to rallies rocking Iraq's capital and its south since October 1 and demanding an overhaul of the political system.

The crackdown began in the morning when security forces wrested back control from demonstrators of three bridges spanning the River Tigris in the heart of Baghdad.

Three demonstrators died from bullet wounds and a fourth when a tear gas canister pierced his skull, medics and police sources told AFP.

"The security forces are getting closer to us, but the protesters are trying to hold them off by burning tires," a doctor in Tahrir told AFP.

"We can hear live fire now and there are so many wounded."

Three protesters were killed and dozens wounded in the southern city of Basra, medical sources said, as security forces cleared a protest camp outside the provincial government headquarters.

And in the revered Shiite holy city of Kerbala, south of Baghdad, the tents of protesters were reduced to ashes when security forces fired searing hot tear gas canisters at them.

The bloodshed came after political leaders agreed to rally around Prime Minister Adel Abdel Mahdi, whose embattled government was threatened by the largest and deadliest grassroots protests in Iraq in decades.

When the protests first erupted in October, Sadr threw his weight behind them while the Hashed backed the government.

But they closed rank around the premier this week after a series of meetings led by Major General Qasem Soleimani, the head of the Iranian Revolutionary Guard's foreign operations arm.

Soleimani, who often plays a mediating role during times of crisis in Iraq, met Sadr and persuaded him to return to the fold, said a source present at the meetings.

"Those meetings resulted in an agreement that Abdel Mahdi would remain in office," the source said.

Sadr has since gone silent amid reports he is in Iran.

But on Saturday Sistani's office issued a statement denying that cleric "was part of a deal for the current government to stay and the protests to end".

Another source said political factions agreed this week to move forward on reforms and constitutional amendments if the premier and government stayed in place.

"They agreed to end the protests with any means possible and to reopen the bridges and shuttered streets," said a senior member of a party represented at the gathering.

Abdel Mahdi met President Barham Saleh on Saturday for the first time in days. Government sources had told AFP ties between them had been cut after Saleh proposed the premier be replaced.

And on Saturday parliament convened to discuss reform proposals, including hiring drives and increased welfare payouts.

Meanwhile, the streets around Tahrir were in chaos.

"The security forces told us the protests are over and everyone should go home," one protester shouted.

"But we put up more barricades so they won't enter Tahrir. Tomorrow, no one goes to work."

Protesters are now on the backfoot but still occupy part of Al-Jumhuriyah (Republic) Bridge, the closest to Tahrir.

"Our situation as protesters is not good, but we'll stay until we find a solution," said another protester.

Oil-rich Iraq is OPEC's second biggest producer, but one in five people live in poverty and youth unemployment stands at 25 percent, the World Bank says.

Those staggering rates sparked the first wave of protests on October 1, and public anger quickly spiralled into calls for the overhaul of the entire ruling system.

Protesters say the current framework allows political parties to dole out government jobs based on affiliation and bribes, choking out independents in a country with a weak private sector.

They are demanding profound reform and constitutional amendments.

Around 300 people have been killed in the protests, according to toll compiled by AFP. The government has stopped issuing figures.