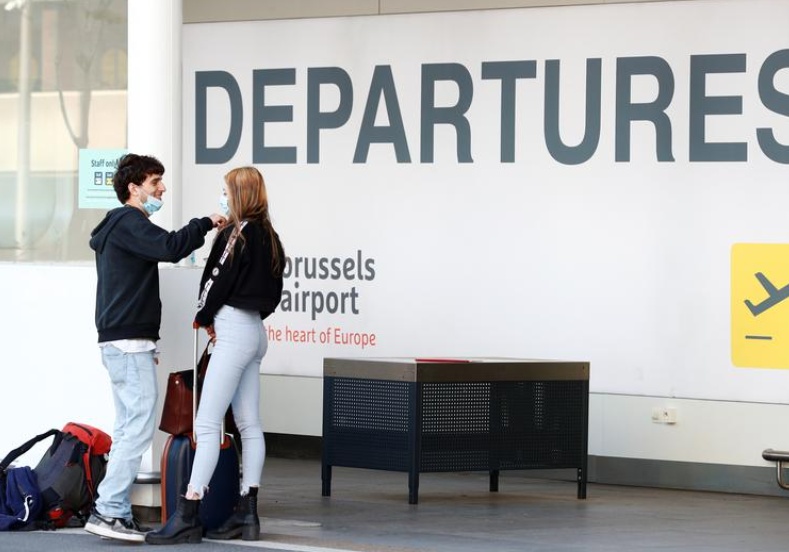 LONDON -- A number of European countries on Sunday began to ban flights from Britain following the emergence of a highly infectious variant of coronavirus.

It has thrown into chaos the Christmas plans of hundreds of thousands of people in Britain and Europe for aiming to spend the holidays with families and friends on either side of the English Channel.

A domino effect of travel restrictions was growing amid rising concern over the mutant strain of COVID-19 that has effectively plunged London and other parts of Britain into the new Tier Four restrictions over Christmas, the London-based Evening Standard newspaper reported.

The list was expected to quickly grow with France and Germany also mulling grounding flights to and from Britain. Britain's neighbor Ireland is expected to restrict flights and ferries.

Eurostar announced it was canceling trains between London, Brussels and Amsterdam from Monday, but the train operator said Sunday that trains were continuing to operate on the London to Paris route.

Scottish First Minister Nicola Sturgeon effectively closed the border with England, announcing people could not enter or leave Scotland. Police Scotland said it had doubled the number of officers stationed on the English border.

The latest development followed a Downing Street virtual press conference on Saturday during which British Prime Minister Boris Johnson warned of a mutation of the virus which has quickly spread across London and the southeast of England.

The announcement of a new Tier Four restriction for the British capital provoked a race to major rail terminals in London with thousands of people fleeing the capital to escape a lockdown over Christmas.

Johnson said that the previous plan to allow up to three households to meet during five days around Christmas will have to be scrapped.

People should not to travel into a Tier Four area, though support bubbles remain unaffected as do the exemptions for separated parents and their children.

For those in Tiers One, Two and Three, rules allowing up to three households to meet will now be limited to Christmas Day only, while in Tier Four, people should not mix with anyone outside their own household, apart from support bubbles.

According to Johnson, the newly identified strain of the virus may be up to 70 percent more transmissible.

Hancock said Sunday that the new variant was "out of control" in Britain, urging Britons to behave as if they already have the virus, especially in areas under the new Tier Fours restrictions.

The British government's Chief Scientific Adviser Patrick Vallance has said the new variant was first seen in mid-September in London and Kent.

By December, the new variant had become the "dominant variant" in London, said Vallance.

By the week ending Dec. 9, the new variant accounted for 62 percent in London, 59 percent in eastern England, and 43 percent in the South East, according to Vallance.