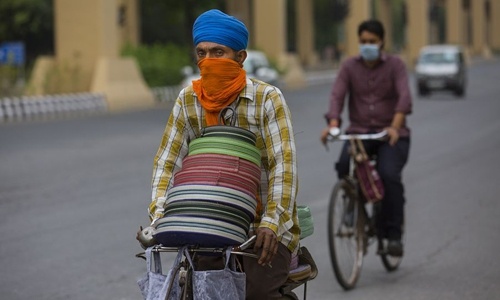 A man covers his face with a piece of cloth as he cycles to transport goods during the lockdown in New Delhi, India, May 13, 2020.(Photo: Xinhua)

A sharp deterioration in air quality in the Indian capital city of New Delhi has prompted concerns among Chinese observers that it will lead to an increase in the COVID-19 infections, adding difficulty to the South Asian nation's already tough battle against the pandemic during the winter season.

A thick blanket of smog returned to New Dehli on Tuesday, bringing an end to months of cleaner air due to a strict coronavirus lockdown in India's capital. Local hospitals have said they are already seeing patients who had recovered from COVID-19 complaining about breathing difficulties, The Times of India reported.

Suranjit Chatterjee, a senior consultant in internal medicine at Apollo Hospital, was quoted by the report as saying, "Nearly 15 percent of all COVID-19 patients develop moderate to severe symptoms. The lung is one of the main organs that are affected and even after the infection subsides, damage caused to the organ remains. Exposure to pollutants prolongs the healing process."

Images available online show a haze over the city of more than 21 million with visibility reduced significantly as the Air Quality Index (AQI) rose past 300 on a scale of 500, indicating "very poor" conditions that pose a risk of respiratory problems.

High levels of particulate pollution in the air increases the chances of COVID-19 transmission, as the virus can become attached to the high concentration of PM2.5 or PM10 pollutants before being inhaled by human beings, causing infection, Yang told the Global Times on Wednesday.

Chinese experts also worry that one of the most effective measures to cope with the airborne virus - frequent circulation of fresh air - could also be affected, as people will be reluctant or unable to open their windows during smog peak hours.

The high level of air pollution could also impair people's immunity systems, leaving them more vulnerable to a series of diseases including COVID-19, they said.

Last year, the Indian capital and its satellite cities accounted for half of the dozen most polluted cities worldwide. New Delhi made headlines in 2019 for recording the highest levels of air pollution anywhere in the world, the British Daily Mail reported on Wednesday, suggesting a return of the smog peak season in winter.

The Daily Mail report attributed the spike in pollution to a combination of factors including the burning of stubble in fields, industrial emissions and vehicle exhaust.

A study by the Harvard University School of Public Health published in May indicated that someone who lives for decades in a country with high levels of fine particulate pollution is 8 percent more likely to die from COVID-19 than someone who lives in a region that has just one unit (one microgram per cubic meter) less of such pollution.

As of press time, India recorded more than 7.23 million COVID-19 infections, ranking second in the world after the US. There have also been 110,586 deaths in the Asian country, per data by the Johns Hopkins University.

China has also suffered from serious air conditions in some regions like Beijing and neighboring cities. But after the strengthened efforts in recent years, air quality has improved in more Chinese cities, with Yinchuan, Lhasa, Luzhou, ans Beijing among the top 14 cities securing the full score for keeping pollutants below the permissible limit, CGTN reported in September.