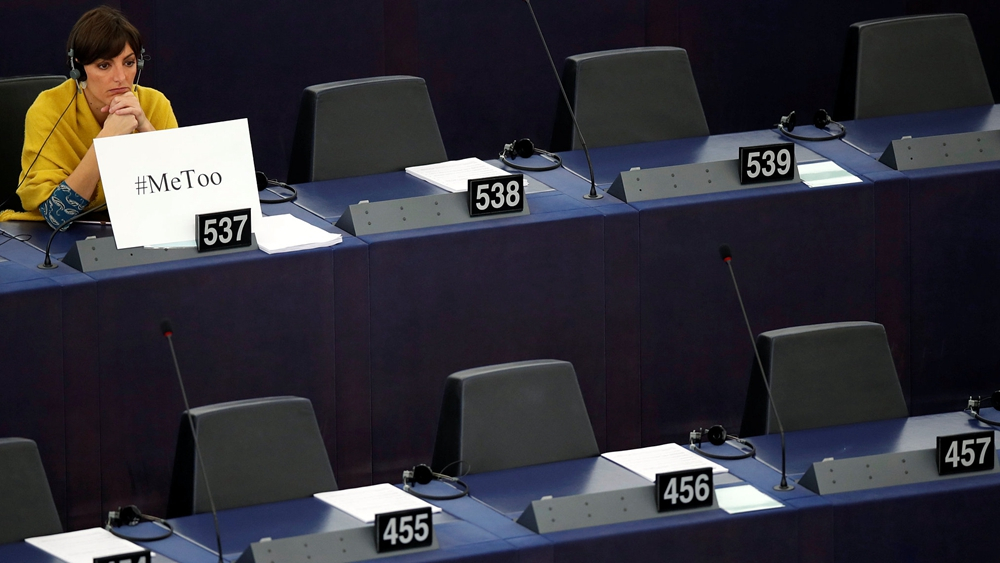 European Parliament member Lola Sanchez Caldentey sits behind a placard with the hashtag "MeToo" during a debate to discuss preventive measures against sexual harassment and abuse in the EU at the European Parliament in Strasbourg, France, October 25, 2017. ( Photo: VCG)

Female lawmakers across Europe face sexual harassment, discrimination, and violence in their work, with 85 percent saying they have suffered rape threats or other psychological abuse, a report said on Tuesday.

Nearly half the 123 women interviewed had received threats of death, rape or beating - many via social media from anonymous citizens - and seven in 10 had been the target of sexist comments.

Parliamentarians fighting gender inequality and violence against women were often singled out for attack, according to the report by the Inter-Parliamentary Union and Parliamentary Assembly of the Council of Europe.

But the study of women lawmakers and parliamentary staff in 45 European countries found few spoke out and many parliaments lacked mechanisms to enable them to do so.

The research follows a damning report published this week into allegations of sexual harassment and bullying of staff in Britain's parliament.

The independent inquiry heard that female staff were subjected to repeated propositions and frequent inappropriate touching by some male members of parliament (MPs).

This included "leaving a hand on their knee for an uncomfortably long time, trying to kiss them, grabbing their arms or bottoms, or stroking their breasts or bottoms."

Some male staff were also said to be "serial predators," according to the report by former High Court judge Laura Cox.

She described a "culture, cascading from the top down, of deference, subservience, acquiescence and silence, in which bullying, harassment and sexual harassment have been able to thrive and have long been tolerated and concealed."

Women were abused in vulgar terms, made the butt of jokes and targeted by boorish behavior by groups of male MPs, who made lewd comments and asked repeatedly about their sex lives, the report said.

Some witnesses described "atrocious treatment of young women by MPs" and said some women were treated as "personal servants, with veiled threats to have them moved if they failed to comply with requests."

Witnesses described some of the general abuse and bullying as "very disturbing."

Cox described a culture that "actively sought to cover up abusive conduct" and a lack of protection for individuals reporting abuse.

She criticized a new system for dealing with misbehavior by MPs and called for "broad cultural change."

Senior parliamentary staff will respond to the report after the meeting next week.